First Nations, Métis, Inuit, Status, non-Status — just by being, as Indigenous People we are inherently political. From how we refer to ourselves, to Section 35 of the Constitution, to whether or not we pay taxes, it feels like our business is made into everyone’s business.

These words were part of my opening reflections at my “Making Peace with Politics” presentation this past December at RavenSpeak Amplified. It was a culmination of a year’s personal reflection on whether or not I would enter into the fray of mainstream politics. I thought about occupying my space of expression in a new way.

I’ve always been nonpartisan in mainstream politics. That said, once I had my BBA in tourism, I learned quickly that change came from working with politicians, be it securing the final push of support needed to launch APTN, to shaping a path forward in the early days of Indigenous tourism development. For the past 20 years, I strived to leverage opportunities. I work and volunteer with communities and collaborate with national organizations to share knowledge and invite people to engage.

In 2017, I got to witness firsthand the power of allyship. On March 4 that year, Stk'emlupsemc te Secwepemc Nation (SSN) said “no” to the KGHM-Ajax copper and gold mine, and yes to Pípsell. This project, where I was the communications lead, opened my eyes to real acts of solidarity. I am honoured to have helped connect our shared values and goals, so that Secwepemc and non-Secwepemc rallied around the choice to say no to a mine. We said yes to keeping a sacred site intact, which is also a favourite trout fishing lake of the general public. Together, we said yes to healthy people and a healthy environment.

Federal Green Leader Elizabeth May travelled to Tk’emlúps, near Kamloops, twice that spring, first to sign the Pípsell declaration, and second to bear witness to our public acknowledgement of the designation of Pípsell (Jacko Lake and area) as a Secwépemc Nation Cultural Heritage Site. Subsequently, the provincial and federal government also said “no” to the mine project.

I was in close proximity to bear witness to the words of current Prime Minister Justin Trudeau at the December 2015 Assembly of First Nations Special Chiefs Assembly, where he declared, “There is no relationship more important to me — and to Canada — than the one with First Nations, the Métis Nation, and Inuit.” Those words did not match the actions that followed. So, two years later, I found it incredibly refreshing to witness Elizabeth May, a federal leader, step forward and actively engage with Indigenous leadership in their territory multiple times. She demonstrated her allyship through words and actions. May’s actions and the Green Party of Canada’s values were clear, relatable and piqued my interest.

Just over a year later I attended the Green Party of Canada national biannual convention to take pulse of the party from a membership level. I witnessed democracy in action, with policy being shaped very directly by party members, building momentum on the floor, with a clear read of the room through green, yellow and red assigned voting cards. I was fortunate to meet and serve as co-chair of the convention with Lorraine Rekmans, a member of Serpent River First Nation. I was impressed with her grace and grit as someone who has stepped up as a candidate for the Greens since 2008.

In conversing with her, her perspective on how the party’s principle of ecological wisdom appealed to her worldview on traditional ecological knowledge and respect for the longstanding relationship Indigenous peoples have with the lands and waters in Canada, resonated. As Indigenous Affairs critic in the Green shadow cabinet, she shared how the party’s platform on Indigenous Peoples is informed by and based on the Royal Commission on Aboriginal People (RCAP) and the United Nations Declaration on the Rights of Indigenous People (UNDRIP).

I learned of the Green Party of Canada’s commitment to work on a nation-to-nation basis respecting the inherent rights of Indigenous people, as well as a commitment to work in partnership as equals and undertake meaningful consultation so that all endeavours will be informed by free prior and informed consent. Lorraine has been a clear advocate for the elimination of poverty for Indigenous women. She spoke passionately about women being the heart of all communities. To her, supporting women helps build community, ensure care and provisions for children and assists in nation-building.

To me, the principle of “All My Relations” is that we leave no one behind. Frankly put, I plan on being a good ancestor for our future generations. What I was taught from my Secwepemc and St’atl’imc relatives is that we plan for the very long term, for ourselves as well as those who reside in our homelands — that is, when we are NOT being crippled by poverty (a result of being stripped of our lands, our traditional livelihoods, and cultures, and having been placed on less valuable lands as reserves, as well as serious lack of educational opportunities.) 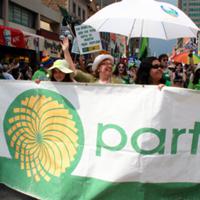 Was It Fair to Criticize Indigenous Stances of Green Party? An Exchange

Given the upheaval that we as First Nations people have been through these past 150+ years, from trying to obliterate us out of existence literally, to figuratively trying to kill the Indian inside the child through residential schools, we are on a healing path. Being “inherently political” means we are born with intergenerational baggage. Fortunately, we also have intergenerational wisdom to move forward.

As caretakers of our homelands, my relatives and I know that everything is interconnected because we witness that interconnection through the seasons, from the bugs, plants, waterways, animals, birds, fish, trees, etc. We plan for clean air and water. We fight for watershed protection. We plan for strong ecosystems, for sustainable economic development. My ancestors never relented; they simply wanted improved conditions for everyone. As they stated in the Sir Wilfred Laurier Memorial of 1910, “We will help each other be great and good.”

The values of equity and social justice that my ancestors called for are at the heart of the Green Party of Canada and Global Greens worldwide. It is my honour to stand with fellow Greens to envision and enact the necessary steps for a bright future for our future generations.