Yes, the collapse of a second major B.C. drug-related case within weeks raises big questions about the competence of the RCMP and federal prosecutors.

But the bigger scandal is the myth that underlies our drug policy.

On Oct. 3, the RCMP’s serious and organized crime unit announced it had seized 132 kilograms of cocaine and 40,000 fentanyl tablets. Prosecutors charged Yan Chau Lam of Richmond and Gertrude Cheong of Vancouver.

In the last month both cases have fallen apart and all charges have been stayed. In theory, that means they can be revived within a year; practically, it’s a way for prosecutors to avoid the embarrassment of simply withdrawing the charges.

What went wrong? The RCMP and federal prosecutors won’t say, to the dismay of B.C. Attorney General David Eby, who called the collapse of the money laundering case “a crisis for our province.”

But it’s more important to look at the faulty — even idiotic — underlying premise of this approach, which claims, despite all evidence, that attacking the supply of drugs is useful.

Billions spent for what?

When the RCMP announced the 2017 seizures of fentanyl — 40,000 tablets, remember — and cocaine, their media release claimed big benefits.

“These seizures would definitely have impacted the transnational organized crime networks involved,” said a quote attributed to Supt. Cal Chrustie, then the head of major projects for the BC RCMP’s federal serious and organized crime section. “Even more importantly, we believe that preventing these drugs from reaching our communities has undoubtedly saved countless lives.”

Which is nonsense. The RCMP seized the fentanyl in February 2016. In March the number of overdose deaths was the second highest on record. The “transnational organized crime networks” were, at most, inconvenienced.

The police have to enforce the laws. But they don’t have to pretend that their work makes any real difference for communities.

Take one grand example. For 12 years, the Canadian Armed Forces have been participating with the U.S. in Operation Caribbe. The government sends ships and aircraft to the Caribbean and Pacific to try and intercept drug shipments from South America.

Every year, the navy reports great success. Since 2006, Canada “has contributed to the disruption or seizure of approximately 85.5 metric tonnes of cocaine and over 6.5 tonnes of marijuana,” the forces reported this fall.

Which sounds impressive. Until you actually think about results.

After 12 years of these multi-million-dollar exercises, drugs aren’t harder to get or more expensive, drug use has not gone down and deaths have soared. Operation Caribbe might be good practice for the military, but it’s dishonest to pretend the results actually make North Americans safer.

The astonishing thing is that we have clung to these myths since the U.S. introduced Prohibition almost a century ago. From alcohol to marijuana to cocaine to fentanyl, we’ve been sold the lie that spending billions on limiting the supply would make a difference, despite almost 100 years of failure.

That failure shouldn’t be surprising to anyone who believes in the power of market forces. If people want something, suppliers will meet the demand. Our drug policy is every bit as stupid as U.S. President Donald Trump’s claim that a border wall will stop desperate migrants from seeking a better life in the U.S.

Prices down, deaths up

But don’t the drug seizure and arrests increase the cost of drugs and reduce the supply?

There’s little research, since our drug policy has been driven by ideology, not facts.

But in 2003, we got a good answer in a study published in the Canadian Medical Association Journal.

Researchers at the B.C. Centre of Excellence in HIV/AIDS and the University of British Columbia had been tracking about 1,400 drug users on Vancouver’s Downtown Eastside for seven years.

So in 2000, when police seized 99 kilograms of heroin in Vancouver and another 57 kilos in Toronto, researchers had a rare chance to assess the impact.

The RCMP had staged a photo op and hailed the two-year investigation as a major victory in the war on drugs. A spokesperson said the seizure would keep heroin prices high, making the drug less accessible for young people. And it was really a big haul, almost equal to all the U.S. seizures along the Mexican border that year.

But the researchers found nothing changed on the Eastside streets. Users didn’t cut back. Heroin prices actually fell slightly after the seizure. In the month before the seizure 10 people died of overdoses; an average of 13 a month died in the three months after the seizure.

“The massive heroin seizure appeared to have no measurable public health benefit,” the study concluded. “Closer scrutiny of enforcement efforts is warranted to ensure that resources are delivered to the most efficient and cost-effective public health programs.”

In 2000, when the RCMP spokesperson said enforcement would keep prices high, he noted a typical dose of heroin cost $35 in Vancouver. By 2016, after years of a failed approach, it was down to $10. (Practically, high prices also simply mean more property crime as users find the needed money.)

Supply side measures don’t work. Yet they are the focus of our response to drug use. Again, statistics are in short supply. But in 2001, the federal auditor general reported on the government’s response to illicit drug use. The report found the government spent about $450 million a year on drug use — about $640 million in current dollars.

And given the ideological bent of the Harper Conservative government, the focus on supply side efforts has likely increased since then.

So figure more than $9 billion spent by the federal government on a failed strategy unsupported by any evidence.

Meanwhile, illicit drug use and misuse has increased. People’s lives have been blighted or ended, not despite the government’s efforts, but because of them. We’re on track to almost 1,500 overdose deaths in B.C. in 2018, almost four a day. That’s more than eight times the number of people who will die in motor vehicle accidents. 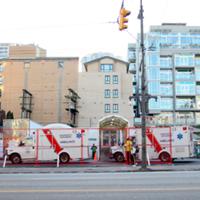 How Vancouver’s Next Mayor Can Help End the Opioid Crisis

But far too little has changed.

Our moral failure flows from the fact that we know what to do, but accept a policy that is killing our fellow citizens.

The Vancouver Police Department set out a pragmatic response in May 2017. Provide treatment on demand. Expand programs that prescribe opioids so people have a safe source of drugs, instead of sending them to risk buying poisoned supplies. Create programs that recognize the links between drug misuse and mental illness. Base the entire response on evidence about what works, not prejudices against drug users.

And this week, Vancouver Coastal Health medical officer Dr. Mark Lysyshyn said all “psychoactive substances” should be regulated, not criminalized.

People are dying because we value our prejudices more than their lives. That should shame us.