“Great cities are random. There are no rules they abide by. No predetermined paths they follow. A great city is a blank canvas that needs people to bring it to life.”

This is the manifesto of Vancouver’s luxury real estate developer Westbank’s “exhibition” called Unwritten — or rather, the condo display office for its redevelopment of Vancouver’s 59-year-old Oakridge mall into a new luxury master-planned community. The exhibition occupies what used to be the retail space of working-class Zellers that had the motto: “The lowest price is the law.” Now, the space showcases condos with luxurious Italian-designed interiors that reflect “the effortless sophistication and style of true Italian culture” for “timeless luxury.”

The Unwritten exhibition follows Westbank’s last year’s Fight for Beauty exhibition, which was an unabashed retrospective of its real estate projects.

Ironically, while Westbank likes to regard itself as a culture company that develops real estate as cultural products, it is in my view part of a global push to create homogeneous non-places devoid of the very thing it purports to purvey — culture.

Cities are not blank canvases. They are organic living beings that reflect their people and their cultures, histories and aspirations. The soot-stained buildings and pubs of Glasgow tell as much about the city’s culture as the futuristic Oriental Pearl Tower and noodle stalls tell of Shanghai. No two cities are the same in their cultural makeup, because their people, not the vision of a single architect or developer, create them.

Describing a city as an unwritten blank canvas is to say that its existing intrinsic culture should be ignored, overwritten and erased.

While Westbank says that great cities are random, without rules or predetermined paths, the renderings of its master-planned Oakridge redevelopment seem to be the antithesis of this.

Westbank calls Oakridge a “cultural hub” and says that it wants the public “to help write the future stories of culture.” But the renderings show a preconceived futuristic vision of 40-storey glass towers on top of a luxury mall complete with shrink-wrapped, pre-curated, cultural amenities. The master-planned development, with its dozen twisting towers of condos, offices and amenities, looks as if aliens decided to establish a micro colony on the 28.5-acre site.

The so-called “mini city” is similar to master-planned luxury communities in Asia and Africa, which Bloomberg critiques as products of a “full scale epidemic” of the “irresistible urge to build cities from scratch.” The 1900s’ garden city urban planning movement, which aimed to create self-contained green communities, has morphed into a global “epidemic” of ultra-modern lookalike master-planned communities. And despite Westbank’s claims, they are not random, but follow strict rules and predetermined patterns without regard for place or history.

Every place, including Vancouver and even the Oakridge area, has pre-existing history and culture. But what defines a place when all places start to look the same around the world? In the pursuit of building world-class 21st-century cities, the city-building visions of those at the helm with control start to converge. In turn, these sterile enclaves typically designed for the wealthy become detached from the larger civic and cultural context they are a part of. Worse, they start to encroach on and redefine surrounding neighbourhoods.

For Oakridge, instead of retaining and adding more quirky cheap eats like Samurai Sushi House and its infamous mega-sushi rolls, the neighbourhood will likely end up with curated chain outfits like Tractor Foods and Matchstick Coffee that fit the predefined vision of Westbank’s new “cultural hub.” Westbank is building an entire town centre at Oakridge, not just a single tower. Similar to other master-planned cities, the town is no longer defined by its inhabitants but by autocratic entities with the power to completely redefine.

Developers like Westbank, urban planners and bureaucrats are not the only ones enamoured with new city building. Silicon Valley has also joined them in the ambition of creating new cities.

In 2016, well-known tech startup accelerator Y Combinator launched a project to explore “building new, better cities.” It believes that “the world is full of people who aren’t realizing their potential in large part because their cities don’t provide the opportunities and living conditions necessary for success,” and “to unleash this massive potential” we should make “better cities.”

Y Combinator even has an online form where it shamelessly states that it wants to build a new city itself and asks the public to submit suggestions of specific locations. Likewise, Sidewalk Labs of Alphabet, Google’s parent company, is already in the planning stages of a new city on Canadian soil. They are working with Waterfront Toronto to build a new smart city “from the internet up” on acres of Toronto’s prime waterfront land. Tech has already “improved,” proponents say, components of the city — transportation with Uber, hotels with Airbnb, movie theatres with Netflix, restaurants with DoorDash. Now they must disrupt the last ultimate frontier — the city itself.

Y Combinator and Westbank should learn from Zappos CEO Tony Hsieh’s half-decade-old, failing plan to revitalize downtown Las Vegas. Hsieh wanted to treat the “city as a startup” in his plan called the Downtown Project, and invested over $350 million of his own money.

I’ve visited Hsieh’s project in Vegas and witnessed what urbanist and Columbia professor Leah Meisterlin calls the “Millennial Serendipitous Aesthetic.” It’s an odd mix — Hsieh’s beloved Burning Man culture meets tech hipster aesthetic, complete with an outdoor mall made of repurposed shipping containers and hyper-curated businesses tailored to the tastes of the tech gentry. It is said that Hsieh even demanded a cupcake shop for the outdoor mall, because that is what every startup fantasyland needs. Meisterlin sums it up best in her article for The Avery Review where she labelled the Downtown Project as a breed of “antipublic urbanism” and a “scripted narrative” that is fixated on a single person’s hubris rather than civic purpose.

It is a global phenomenon, this wave of master-planned communities with scripted narratives tailored to hubris. The “duplitecture” cities in China are massive Disney-like replicas of European cities like Paris and Venice, but with no history of place themselves. I’ve been to the sales centre of the Holland Village duplitecture project in Shanghai, a faux Dutch community with windmill and canals. Like Westbank’s exhibition condo display offices, the project sold the aspiration to elite living through prepackaged culture.

However, for the longest time nobody wanted to live in China’s master-planned duplitecture cities, turning them into ghost towns. Slate reported that the management companies would guide residents and businesses to culturally conform to their surroundings. They would host cultural training courses (i.e. “how to eat caviar”) for residents, recruit Western businesses to fill their streetscape, and even ban people from participating in Chinese cultural practices in the cities. Recently, the companies have relaxed the cultural restrictions and the communities are now filling with residents and culture that is more authentically theirs. 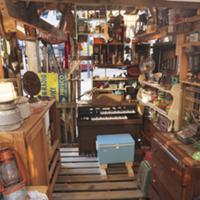 The Fight for Ugly, Or Why Art Can’t Sell Condos

Westbank’s vision for Oakridge as a “cultural hub” is no different than the city-building visions of Y Combinator, Sidewalk Labs, Tony Hsieh, duplitecture projects in China or even the garden city movement of the past — visions that are defined by the singular cultural values of misguided egos and desire for control.

The Unwritten exhibit, with its pretentious manifesto, is a reflection of Westbank’s cultural values, which it is imposing through invasive developments that appear to have little regard for the culture of their surroundings.

Perhaps its current exhibition would be better named Rewritten.