Clearly sensing a major weakness in their argument, the proportional representation (PR) promoters are working hard on a “black is white” argument relating to local representation.

At the moment, we have 87 separate elections on election day. Citizens in 87 ridings look at the candidates, assess their records, their community leadership, their character and their political affiliation and choose accordingly.

Once elected, the MLAs’ offices and their role in the community are non-partisan. They serve the whole community. They do not consider whether a constituent is NDP or BC Liberal or Green when they walk through the door. It is absolutely wrong to suggest that you need to seek out an MLA of your own political persuasion to be heard and to be served. Ask any MLA you meet.

When I was MLA for Vancouver-Fraserview, many people who came into my office did not share my political views, although of course you often have no idea of their politics. Usually they were there for an issue relating to government services, but occasionally for other more political issues (school closures was a big one).

Klein believes MLAs are not interested in the views of constituents who do not agree with them politically. Believe me, he is completely wrong! Those constituents could not matter more — every MLA is constantly trying to build support by working hard for every member of their community, helping with their issues and taking their concerns back to Victoria.

Now let’s talk about riding size. According to the article, with proportional representation “in all cases, local ridings will only grow modestly in geographic size.”

Has Klein read the materials? Because in this he is completely wrong. Dual-member proportional means that most ridings are doubled in size. Mixed-member proportional ridings would be much larger. The single-transferable-vote ridings in 2009 were huge: some were bigger than Germany, which is likely one of the reasons STV failed so dramatically.

The government is being cagier this time. They’re not telling you what your riding could look like because they’re afraid you might not like what you see.

Citizens need to be able to find their MLA. In every proportional representation system, that becomes harder.

The article goes on to say that “Each option ensures you will have both a nearby MLA and an MLA in relatively close proximity who shares your political values.”

Aside from the needless worry on this issue, the statement is just wrong. Dual-member ridings will at most have MLAs from two parties. How does that accommodate the current three major parties, and all the smaller ones who might join them? Even multi-member ridings cannot all have a Marijuana Party or Green Party member. 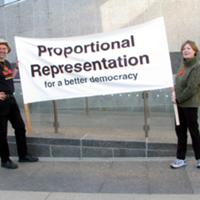 By the way, none of the three options being presented by the government is clear as to how the “proportional” MLAs are selected. The report just says the appointment of some of the MLAs is “complicated.” The names go into a black box and somehow pop out as MLAs. Not very reassuring.

Our electoral system in B.C. is simple; everyone can understand it. Our province is stable and successful. There is no problem being fixed by proportional representation, but plenty are being created.

Proportional representation would be a fundamental change to our democracy. Instead of voters choosing the citizens they want to represent them, voters must choose political parties. The parties choose many of the MLAs, not the voters. Voters get unwanted MLAs foisted upon them. The parties rise in importance and the wishes of local voters are diminished.