A recent Tyee video concisely explains the three proportional representation options that will appear on this fall’s referendum ballot.

However, this is only one part of what voters need to know about the referendum, and probably not the most important.

The first thing voters need to know, before even considering the technical aspects of different proportional representation models, is where their interests lie as citizens.

Our view is that proportional representation is unambiguously in citizens’ interests. It has, in fact, been recommended by almost every commission, assembly and report ever produced in Canada and the provinces — 14 of them by our count. The only exceptions were reports of all-party committees led by a party that promised reform while in opposition, but changed its mind once in power.

So why has proportional representation never been implemented in response?

Keep in mind that electoral reform needs to be enacted by the very governments elected under the existing first-past-the-post system (FPTP) and that most governments under FPTP are elected with a “false majority.”

Knowing that such “false majorities” would not be possible under a proportional electoral system creates a huge disincentive for governments to reform the electoral system. In a system that is typically dominated by two major parties, both may prefer taking turns wielding unbridled power based on false majorities over the alternative of sharing power and co-operating with other parties on an ongoing basis.

This clash of interests runs deep. Those on the side of the status quo include politicians elected under the current system, the political organizers who brought them to power, lobbyists, and others with a vested interest in the existing system.

This is the inconvenient truth of why electoral reform is such a challenge, and citizens need to look carefully at who is against proportional representation before accepting their arguments. The clash between the interests of the political elite and citizens who want to hold politicians to account needs to be understood as we try to digest the information, misinformation and fearmongering being thrown at us.

Referendums, understood from this perspective, are as much a tool of political elites to forestall change as they are a way for citizens to express themselves on an important issue. Referendums are notoriously difficult to win because of what is known as the “status quo bias,” meaning that voters tend to vote for the devil they know over the devil they don’t know. This allows vested interests to play on voters’ fears.

In the round of referendums in the 2000s, the governments of B.C., Ontario and P.E.I. took no chances and further stacked the deck against change by requiring 60-per-cent support province-wide and majority support in 60 per cent of ridings. This is how the 2005 referendum in B.C. came to “fail,” even though 58 per cent of voters supported change.

Proportional representation from a citizen’s perspective

We all know that FPTP distorts electoral results. The winning party gets a winner’s bonus (a share of seats larger than its share of the vote), and other parties get less than their share. The smaller the party, the greater the handicap. This is why the Green Party won only three seats in the last B.C. election even though it took almost 17 per cent of the vote, and why the Conservative Party in B.C. has been relegated to the sidelines in our province. In Alberta, Saskatchewan and Manitoba it is the Liberals that have been decimated.

Within B.C., every party routinely achieves less than its share of the seats in one region or another. In 2017, the BC Liberals did particularly badly on Vancouver Island, where they won only one seat out of 14 despite having taken 28.5 per cent of the vote.

Imagine instead a political scenario involving four parties able to take their rightful share of the vote in B.C. and win a corresponding number of seats: Conservatives, Greens, Liberals and the NDP.

As citizens, we want our voices to be heard. We need to know that wherever we happen to live and whomever we vote for, our vote will have as much of an impact on the results as anyone else’s. As voters, we want to have a meaningful selection of candidates and parties to choose from, beyond marking an X for a candidate who is likely to win anyway, has little chance of winning or is not our preferred choice. Most citizens would also like policies to be based on a reasonable social consensus in which different views have been taken into account – policies that will stand the test of time. Achieving consensus does take longer, but is well worth the effort.

It is no coincidence that more than 80 per cent of OECD countries — and countries around the world — use some form of proportional representation, including some of the best governed countries in the world. The evidence shows that proportional representation countries perform better on just about any indicator you could think of. What is more, they do so based on a more consensual form of democracy involving co-operation among parties instead of the hyper-partisan approach that we have become used to in Canada.

With so much evidence in favour of change, voters should look carefully at the arguments being put forward by opponents of proportional representation. We should not allow them to frame the discussion in terms of irrelevant cases like Israel and Italy, which use systems very different from those proposed for B.C., or phoney arguments about “rigging the process.”

In New Zealand in 1992 and 1993, as in P.E.I. in 2016, similar referendums passed because citizens took things in hand and responded that they had had enough of FPTP. This is our chance to do the same and not be misled by defenders of vested interests.

The choice of systems on the ballot

From a voter’s perspective, the B.C. referendum rides almost entirely on the first of the two questions being asked. Do we want to stick with the status quo or give proportional representation a try, knowing that there will be a second referendum after two elections under the new system? That is the core question.

The second question asks voters which of three proposed proportional representation systems they prefer. All three — Dual Member Proportional (DMP), Mixed Member Proportional (MMP) and Rural-Urban Proportional (RUP) — would be excellent choices for B.C., providing substantially the same outcome. Parties’ shares of seats in the legislature would match their level of popular support, and because voters would have more than one MLA representing them, the vast majority would end up with at least one MLA they voted for. All three systems share common features: all retain local representation; all keep the number of MLAs more or less the same; and in no case would regions have fewer MLAs than they have now. All use a relatively simple ballot.

These are systems chosen with B.C.’s traditions and geographical realities in mind, and while the fine details are not fully defined at this time, the criteria and process for finalizing those details are clear and credible.

That said, it is fitting that the choice of systems be left to voters, and fitting that the second question be optional. This allows voters to engage in a way that matches their own level of comfort. 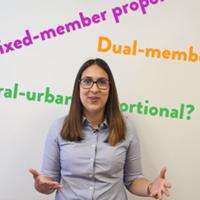 The only comment we would like to offer on specific systems is with regard to Rural-Urban Proportional (RUP), which will affect voters differently in urban and rural areas. If you live in an urban area —as do 86 per cent of British Columbians— you should think of RUP as primarily a system of multi-member districts with ranked ballots— the Single-Transferable-Vote (STV) model. If you live in a rural area, RUP for you will be much like the Mixed Member Proportional model.

The B.C. referendum provides an opportunity to finally get this right. If we do, B.C. could become a beacon for the electoral reform movement across the country. Depending on what happens in the coming Quebec provincial election in October (in which all of the opposition parties have come out in favour of PR), BC could find itself in a neck and neck race with Quebec to become the first province in Canada to finally reform its electoral system.