This one is for the guys. As a white middle-aged heterosexual male, I have a message for Harvey Weinstein: Fuck you.

While most men do not commit sexual assaults, most men also seem blissfully unaware of the low-level state of fear that women exist in on a daily basis due to creepy, predatory or violent behaviour by those that do.

Even fewer men have tried to do something significant about this wretched situation — myself included. As Louis CK said (himself an outed and admitted creep), “imagine you could only date a half-bear half-lion.”

Many men would have a hard time visualizing a situation where at almost any time their more powerful gender opposite might decide to impose non-consensual penetrative sex. Or weeping in the shower in the aftermath. Or not being believed by friends or family or the authorities. Or having to put up with sexual harassment in the workplace every day because complaining would resolve little and might get you fired.

The Me Too movement has been criticized as arbitrary vigilantism but at least it has accomplished something. The same cannot be said for so-called due process, the credibility of which lies in smoldering ashes.

Of the 460,000 sexual assaults that happen in Canada every year, only five per cent are reported to the police. Of that tiny proportion, less than half result in charges being laid. Of those, only one in four lead to convictions. Based on those numbers someone who commits a sexual assault has virtually a 99 per cent chance of getting away with it.

Jian Ghomeshi walks free today. Bill O’Reilly has never been charged with a crime. Harvey Weinstein may also be acquitted given how skewed the justice system remains against victims brave enough come forward. All of these powerful and famous men also managed to suppress allegations of their creepiness for years.

While the legal system failed miserably, Me Too has not. Each of these men now sees their credibility and careers in tatters. When the CBC HQ could no longer sweep Ghomeshi’s conduct under a lumpy carpet, he was fired almost the next day. Many Canadians would agree that most of his replacement hosts on Q have been comparatively terrible, but the idea of Ghomeshi’s return to high profile public employment is rightly unimaginable.

Bill O’Reilly was an undisputed cash cow for Fox News. His show was the highest rated on cable news for 16 consecutive years bringing in $466 million in advertising revenue between 2014 to 2016. His sexual misconduct was also widely known and tolerated within the network given that the company coughed up $13 million in gag order settlements to his many accusers dating back to 2002.

Investigative reporter Emily Steele of the New York Times only broke this story by seeking out one of O’Reilly’s victims at her pilates class and convincing her to go on the record. Other women came forward, advertisers fled and O’Reilly’s show was abruptly cancelled. O’Reilly also lost custody of his two children amid allegations detailed in court documents that he dragged his ex-wife down a staircase by her neck.

Harvey Weinstein’s appalling behaviour was for years widely known in the world’s capital of celebrity gossip. Yet so powerful was his influence that no one in the press dared cross him, and his many victims were silenced with threats or money.

Me Too brought down this dinosaur as well. Expelled from the Academy of Motion Pictures he once lorded over, Weinstein spent seven months on the lam before his humiliating perp walk in front of the world’s news cameras last month.

While there is a certain schadenfreude to such events, meaningful gender equity has a long, long way to go. Even within law enforcement agencies, the record of protecting women from harassment or assault is shameful. A class action lawsuit of female RCMP officers could involve up to 10 per cent of those who worked for the force since 1974. More than one in four female Canadian Armed Forces members have been sexually assaulted during their careers. 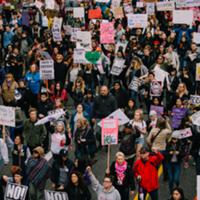 Eight Ways You Can Work for Gender Justice

Sexual abuse of children shatters lives and contributes to the epidemic of adult addiction decades later. To those who see even human tragedy through solely an economic lens, the figures are staggering. What little research has been done indicates that every victim of rape incurs a “lifetime unit cost” over US$120,000 in lost productivity, addiction, mental health and marginal government expenses. Given that over 25 million adults in the U.S. alone (almost all women) are victims of rape, the social misery created by sexual assaults (almost entirely perpetrated by men) is US$3.1 trillion.

We need fundamental reforms to the justice system to better deal with sexual assault and workplace harassment. More women in leadership roles in government, business and law enforcement will also help. But ultimately almost all workarounds to limit sexual assaults are necessitated due to a small proportion of men acting like predatory dickheads.

The last month saw two despicable male specimens violently take out their sexual frustrations on innocent victims. A self-described sexual loser drove a rented van down a busy sidewalk in Toronto killing 10 people including 8 women. Another killed 10 people in a Santa Fe high school — including the apparent target of his understandably unwelcome advances.

A word to my fellow guys: this is not complicated. Women — like all humans — deserve basic rights of feeling safe and respected. If women feel unsafe or not respected they are unlikely to want to be around you, especially if you are obviously a creep.

We have come a long way and obviously have a long way to go. Women have been doing almost all the heavy lifting in this vital societal change while many of my fellow men seem content to merely bitch and moan about it. Don’t be an asshole. It is that simple.