Remember “peak oil”? Don’t worry about it. Nobody else does either.

The proximate cause of this unusual Sunday uproar was Kinder Morgan Canada Ltd.’s skillfully timed news release saying that if Canada can’t quickly come up with a way to silence political opposition to the Trans Mountain pipeline expansion project in British Columbia, it will pull the plug on the plan by the end of next month.

Well, I’m putting words in Kinder Morgan’s corporate mouth. What the statement published at 5 p.m. Sunday afternoon said was that the company “is suspending all non-essential activities and related spending on the Trans Mountain Expansion Project.”

The company explained: “Under current circumstances, specifically including the continued actions in opposition to the Project by the Province of British Columbia, it will not commit additional shareholder resources to the Project.”

That is the crux of the matter — the demand by the Canadian subsidiary of Texas-based Kinder Morgan Inc. that, in effect, Canada needs to stop acting like a constitutional democracy and start acting like a petro-tyranny, or Kinder Morgan will take its pipeline and go home.

This suggests Kinder Morgan’s lawyers have a clearer grasp of what B.C.’s constitutional chances are with its still vague plan to enact environmental legislation to mitigate potential damage from the expanded pipeline than do most political commentators in Alberta, who have declared the idea unconstitutional without actually knowing what it is.

Alberta NDP Premier Rachel Notley held a rare Sunday news conference at which she said, rather cleverly, “maybe the government of B.C. feels they can mess with Texas, and who knows, maybe they can, but let me be absolutely clear, they cannot mess with Alberta.” She vowed “serious economic consequences” for B.C. if Alberta doesn’t get its way.

Perhaps she will soon tear another leaf from the book of the Texas Revolution and hoist a flag saying, about all the stuff we’re going to cut off, “Come and take it!” Albertans who think that sounds like a good idea might not recall what happened in Texas on March 6, 1836.

Prime Minister Justin Trudeau jumped on the fatuous rule-of-law bandwagon. Tweeting yesterday from Saskatchewan, he said “Canada is a country of the rule of law, and the federal government will act in the national interest. Access to world markets for Canadian resources is a core national interest.” This is ironic, of course, since Kinder Morgan’s complaint appears to be that Canada is acting too much like a country of the rule of law.

Astonishingly, Alberta Conservative leader Jason Kenney, normally a harsh ideological foe of “picking winners and losers” with taxpayers’ money, was apparently willing to make an exception for the oil industry. Sometimes, he said, “there is a compelling case for the state to come forward, using its credit, its financial leverage, to ensure economic progress. I believe this is such an instance.” Presumably they’re crying at the Regina headquarters of the Canadian Taxpayers Federation.

Well, as has been said in this space before, if the Trans Mountain pipeline really does represent an essential national interest, then it should be a national project.

As I wrote in mid-February, “if an expanded pipeline capable of carrying diluted bitumen from north central Alberta to the West Coast is essential to the health of the national economy, and the survival of Alberta’s, then the federal government should build it and run it.”

This, I argued, would reassure both British Columbians and Albertans, including Indigenous peoples, regardless of their points of view on the specifics of the project. It would ensure meaningful financial and environmental accountability. It would protect good jobs, with fair wages, and adequate staffing for environmental protection.

It could include environmental and coastal protections in the overall scope of the project without the temptation to cut safety corners to pad the corporate bottom line.

It would restore to our national government partial influence over an essential industry it foolishly gave up when Brian Mulroney’s Conservative government partly privatized Petro-Canada, a job that was completed by the Liberals under Paul Martin.

It would make it possible to ensure Canadian oilsands activities did not trash our climate commitments under the Paris Agreement and international climate change measures yet to come.

And it would reassure Canadians outside Alberta this isn’t just a boondoggle to enrich a few well-placed, U.S.-based corporate bosses. 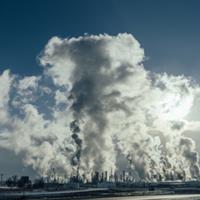 So… don’t look for that to happen!

Lost in yesterday’s hysteria was the fact many savvy observers of the oil industry have been saying for months: the economics of the pipeline expansion were dubious and that, even without protests and talk of B.C. environmental legislation, Kinder Morgan would look for a way to walk away from the deal with its corporate pride intact.

Peak oil was much talked about in the early 2000s, the idea that after a maximum point of oil extraction had been reached the world’s economy would go to hell in a hand basket because there wouldn’t be enough oil to do all the stuff we humans want to do with it.

Instead, it turns out the world’s economy has gone to hell in a hand basket because there’s too much oil to fetch a good price.

But don’t worry, everything will change again soon! In the meantime, peak oil pipeline hysteria rules.