Winners are always champions of the status quo.

Like BC Liberal leader Andrew Wilkinson. He was asked whether it was fair that employers had paid MSP premiums for 40 per cent of workers, while the rest had to pay the premiums out of their own pockets.

“Fairness is always a matter to be sorted out in the marketplace,” he said. “That’s what employers have to do is compete for good workers and pay them appropriately.”

So if you and your spouse are both working full-time at $15 an hour — about $29,000 each — it’s fair that you had to pay MSP premiums. And that the Liberals doubled them.

Just as Wilkinson, paid almost $159,000, thinks it’s fair that taxpayers take care of his MSP premiums as part of a lavish benefits/pension package for MLAs.

It’s the market, you know.

Which is rubbish. MLAs’ pay and benefits weren’t set by the market. The government ordered a rigged review which delivered big raises and pensions the rest of us could only dream about. The review decided MLAs needed up to $19,000 a year for a second home in Victoria, while our elected representatives decided people on disability assistance should be able to find a place to live in Victoria for $4,500 a year.

Free markets bring great benefits. But the free market mantra has become a justification for the powerful to protect their own interests at the expense of other citizens.

Broadly, the tax ends MSP payments for individuals and shifts the cost to employers. About 40 per cent of employees, generally unionized or management, often in the public sector, have had their MSP premiums paid by the employer in the past. Most of us paid $900 a year or more. (People with net household incomes under $42,000 could apply for an exemption.)

The Liberals, recklessly, promised to cut MSP premiums in half in 2017 without saying how they would cut services or raise other taxes to make up the lost revenue.

The New Democrats upped the ante by promising to eliminate MSP premiums — also without saying how they would make up the lost revenue. Once in government, they created an MSP task force to come up with a proposal on replacing the revenue and then mostly ignored the panel’s interim report, delivered Feb. 1. The panel noted “a mix of labour, business, and public policy groups, recommended that the needed incremental revenue be split between personal income tax and payroll tax based on the current proportion of MSP premiums paid by individuals and businesses respectively.”

The report said it was “leaning towards a combination of a personal income tax surcharge, a small payroll tax, and one or more of the additional ideas we are developing as the best way to replace the $1.3B revenue from the full elimination of MSP premiums.”

Instead, the government decided to introduce a payroll tax that effectively makes employers pay the MSP premiums — and a bit more — for all employees, not just people like Wilkinson. Small businesses, with less than $500,000 in payroll — say seven or eight employees — are exempt. Those with $1.5 million or more will pay tax equal to 1.95 per cent of payroll.

It’s a cost for businesses. Liberal MLA Rich Coleman asked about one, Darvonda Nurseries in Langley, during the legislature question period Feb. 27. The family business has found a way to “maintain the homestead and employ 250 people,” Coleman said, but will have to pay $100,000 when the health care payroll tax is in place. They were blindsided by the tax, he said, which is not really true, as the MSP task force had already suggested a payroll tax after broad consultations.

Anyone who has run a business recognizes that an extra $100,000 in expenses is unwelcome.

But Darvonda has a payroll of $5.1 million. It’s moved way beyond the “homestead,” with 27 acres of greenhouses in B.C. and Alberta and a strong business model that includes taking “a vested interest in our staff in regards to their safety, personal improvement and working and living environments.”

The health care tax will add $400 a year per employee — 1.95 per cent. It’s a cost for sure, but hardly killing for a company with an interest in its employees’ “working and living environments.”

If Wilkinson and Coleman think it’s reasonable that taxpayers cough up for their MSP premiums, why shouldn’t Darvonda cover costs for its employees?

The new tax is going to be difficult for some organizations. It’s more than the individual MSP premium for someone being paid $60,000, so municipalities and school boards that already paid employees’ premiums could face additional costs. Non-profits have an additional expense with little chance to increase revenue. (Though really, should non-profits have been refusing to be among the 40 per cent of employers who covered MSP premiums for their staff?)

But broadly, the change reflects a public policy approach aimed at ending a regressive tax and shifting relatively modest costs from individuals and families to business. Addressing, in a small way, equity and equality.

One of the great and destructive myths of the last two decades has been that rising inequality was the result of the same mysterious market forces cited by Wilkinson.

There were market factors. But governments made choices that increased inequality, on everything from taxes to disability benefits to labour law. A 2011 Conference Board of Canada report, for example, found that between 1976 and 1994 the tax and transfer system increasingly reduced income inequality.

But after 1994 the trend reversed and polices increased economic inequality. In 1990, to take one example, some 83 per cent of unemployed individuals were eligible for EI benefits; by 2009, that was chopped to 48 per cent. That widened inequality. 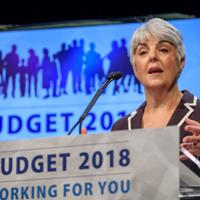 NDP Wins with Bold BC Budget

Here in B.C., the Liberal government chose to shift the cost of paying for services from business owners and corporations to individuals and families.

In 2002, taxes clearly paid by business — corporate taxes, resource royalties — made up 17 per cent of government revenues. (Some things like sales tax affect businesses and individuals.)

By 2016, the budget called for businesses to provide 10.6 per cent of revenues. If business had continued to pay the same share as they did at the beginning of Liberal rule, revenues would have been $3.2 billion higher — a lot more than the health care payroll tax will raise.

Liberal tax policy wasn’t driven by the market. It was a policy choice to benefit one group in society — and increase inequality.

The current government has chosen to benefit a different group with its health payroll tax, which is what governments are elected to do. In three years, citizens can decide if it’s doing the right things.