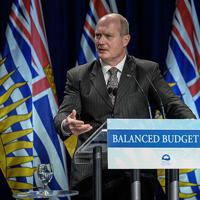 BC Best Province for Low Taxes? Uh, Not for Poor Families

But since she's been premier, a fairly typical retired couple has seen their provincial taxes increase by 19 per cent.

A low-income family with two children has faced an even larger increase, paying 20 per cent more in provincial taxes since Clark's first budget in 2012. That's an increase of 4.6 per cent a year, more than twice the inflation rate.

There is nothing wrong with higher taxes, if they're equitable and the money helps build a stronger society.

But Clark falls down badly on equity, according to this week's budget documents.

While seniors getting by on modest pensions and low-income families have faced 20 per-cent tax hikes, their more affluent neighbours have pretty much escaped tax increases.

The family of four with a household income of $90,000 is paying $102 more in taxes and fees after four years of Clark's leadership. The single high-earner person is paying $165 more.

Partly, this is a consequence of the government's focus on spin and sloganeering. Clark likes to be able to go around saying income taxes are the lowest in Canada, so government managers increase other taxes, like MSP premiums, to keep her happy.

In this year's budget, MSP premiums jumped again to bring in $2.6 billion. For the first time, they brought in more revenue than royalties from forests, natural gas and mining combined.

Clark can say that B.C. has the lowest income taxes in Canada.

But look at the total provincial taxes, and the story is different. A table in the main budget document offers detailed information on five different types of taxpayers and what they pay across Canada.

What's more important is how people are paying. A decade ago, a family of four earning $60,000 paid one-third of their contribution to the government in income tax. That's broadly progressive -- the more you make, the more you pay.

That share has fallen to 20 per cent today, as fees and regressive measures have been piled on by this government.

There is a pervasive myth that growing inequality is the inevitable result of some economic force, as immutable as gravity.

The shift in who pays for government isn't just a matter of the amounts paid by different families.

The Liberal government has steadily increased the amount paid by individual families, cutting the share paid by businesses.

It's tough to break down who pays what. Sales tax, for example, is paid by families and by business.

But 10 years ago, taxes clearly paid by business -- corporate taxes, resource royalties -- provided 18 per cent of provincial revenues. This year, they will provide 12 per cent of revenues. Businesses will pay more than $1 billion less than they did a decade ago.

In the same period, taxes that can clearly be allocated to families have increased by $4 billion.

Partly that reflects the collapse of natural gas revenues. (Though a smarter, more prudent government would have created a real Prosperity Fund and socked some of those non-renewable revenues away knowing the boom would be short.)

But, as the budget notes, the natural resource sector provides a larger share of GDP today than it did in 1981. The citizens, as owners, are just getting a lot less revenue from the companies using the resources.

In any case, the government had many options for making up those revenues. And they choose to make families pay.

The carbon tax offers a tidy demonstration of the tax shift from businesses to families. The tax is supposed to be revenue-neutral. "All revenue generated by the carbon tax will be returned to individuals and businesses through reductions to other taxes," the government promised in 2008.

That year, 64 per cent of the offsetting tax cuts benefited individuals and families and the rest went to businesses.

In this year's budget, families and individuals get 35 per cent of the tax savings that are offsetting the carbon tax; businesses get 65 per cent.

The budget offered a vague announcement about a planned Commission on Tax Competitiveness to look at changes to encourage business investment. It's not difficult to predict the members will come from the business community and recommend lower taxes for business, without noting that means higher taxes for families.

What British Columbians really need is a commission on tax fairness to look broadly at the way taxes are collected, who is paying and how we can build a more equitable, transparent and sustainable system to raise the revenue government needs.