More than half of 48 dams that oil and gas companies built in recent years without first obtaining the proper permits had serious structural problems that could have caused many to fail.

And now, the BC Oil and Gas Commission, which appeared to be asleep at the switch in allowing the unlicensed dams to be built in the first place, is frantically trying to figure out what to do about them after the fact.

Information about the unprecedented, unregulated dam-building spree is contained in a raft of documents that the commission released in response to freedom of information requests filed by the Canadian Centre for Policy Alternatives.

The documents obtained by the CCPA, along with other materials recently posted on the OGC’s website, reveal that 28 of at least 48 unlicensed dams on Crown (meaning public) lands had significant structural flaws or other problems belatedly identified by commission staff.

All the dams were built to trap fresh water used by energy companies drilling and fracking for gas in northeast B.C. In some fracking operations in the region, companies are pressure-pumping the equivalent of 64 Olympic-size swimming pools of water underground to break open gas-bearing rock formations, triggering earthquakes in the process.

The OGC paved the way for the construction of the dams by granting companies numerous permits under the Land Act to use public lands to “store water.”

But in approving the applications, commission personnel failed to ask basic, critical questions: How did companies intend to store the water? In tanks? In pits? Behind dams?

Since the OGC didn’t ask, the companies didn’t disclose that they planned to build dams — lots of them.

In one notable case, documents obtained by the Canadian Centre for Policy Alternatives indicate that one of the companies, Progress Energy, also mischaracterized what it proposed to build in documents submitted to the OGC.

In that case, Progress Energy, a subsidiary of the Malaysian state-owned corporation Petronas, filed documents with the OGC indicating where a water storage “pit” was to be excavated on land just to the west of the Alaska Highway and a short distance south of the Sikanni River. The document was submitted to the Blueberry River First Nation as part of the company and government’s “consultation” record with the First Nation.

Instead of an excavated pit, or hole in the ground, what was built was an earthen dam 23 metres high, or roughly as tall as a seven-storey apartment building.

Having allowed one unauthorized dam after another to be built, the BC Oil and Gas Commission confronts a daunting regulatory challenge of its own making. In some cases years after the fact, commission personnel must retroactively approve, deny or order modifications to dozens of dams that are already built on Crown lands.

The after-the-fact review process will include ruling on the environmental and health and safety risks posed by dams whose engineering specifications and construction plans were never vetted by any provincial agency before construction. It will also include retroactively reviewing, approving or denying dozens of pending water licence applications.

How First Nations will be consulted in all of this remains unclear, as the consultations will also occur well after the dams have been completed.

Less than two weeks after the CCPA published its initial research on unauthorized dams last spring — and after numerous media outlets picked up on the story — OGC personnel stepped up efforts to understand just how structurally unsound some of the dams built on its watch might be.

That effort included sending personnel by helicopter just two weeks after the story broke to 47 suspected unlicensed dams. These inspections (which took place on May 16 and 17) occurred shortly after heavy rains had pummelled the region and fossil fuel companies had been warned by the commission to protect their infrastructure against possible flood damage.

The fieldwork uncovered serious problems at seven facilities, or 15 per cent of all dams visited. Among the most significant problems were dams built without spillways, meaning that there was no safe way to let water out of dam reservoirs if they became dangerously full. Building a dam without a spillway is the residential construction equivalent of building a house without a door. There’s no safe exit point.

At one Progress Energy dam, the inspectors arrived to find a work crew using four pumps to partially drain a reservoir holding back nearly 50 Olympic swimming pools worth of water, or 330 million gallons.

The pumped water was racing downhill away from the dam toward a steep bluff beside Blair Creek, about a 40-minute helicopter ride north and west of Charlie Lake. The pumped water was rapidly eroding the bluff. With no properly designed spillway for the dam’s water, the company’s jerry-rigged pumping operation was in danger of causing the bluff to destabilize and slide into the creek.

Only by chance did the inspectors arrive in time to spot the “erosion and slope stability” problem unfolding near the creek, the FOI documents reveal. They phoned Progress Energy’s Calgary offices and told the company to stop pumping the water.

Progress was also identified in the inspection reports as having 14 additional dams with evident problems.

Noted “deficiencies” at these other 14 dams included no armoured spillways, evident slumping of earthen dam walls, “erosion and cracking” issues, no water licences having been applied for before the dams were built, and two instances where the dams were so tall that they qualified as “major projects” under B.C.’s Environmental Assessment Act.

In an undated “summary of information” written some time after the May inspections, numerous concerns were raised about Progress’s dams. The summary was penned by OGC hydrologist Allan Chapman, OGC compliance and enforcement officer Ken McLean, and the OGC’s recently named and first-ever dam safety officer Justin Anderson.

“We are aware that Progress Energy submitted water licence applications for many dams on Dec. 23, 2016,” the memo reads. In fact, Progress had actually applied for 13 water licences that day — an exceedingly rare event in itself, to say nothing of the fact that every application involved water rights at dams that the company had built without obtaining the licences first.

“Chapman is generally aware that the Progress Energy dams were constructed without engineering designs and plans, without clear adherence to and consistency with dam safety requirements, and that some have an array of deficiencies associated with fill and berm instability, and that some (possibly most) lack basic dam construction standards such as spillways or outlets designed for a specified inflow,” the summary said.

Of the 47 dams inspected in mid May, three turned out to not be dams. Another three were definitely dams and had problems. But in those three cases, the companies had essentially deactivated the dams at some point after unspecified problems arose.

That brought the number of dams that the inspectors dealt with over the two days of fieldwork down to 41. The 41 dams were all located in the Montney region, which is in the more southern portion of B.C.’s vast northeast.

Since those May inspections, further fieldwork was done. OGC personnel inspected more dams, including four built by Nexen Energy (a wholly owned subsidiary of the Chinese state-owned oil and gas giant CNOOC) in the Fort Nelson area further north from where the May inspections took place. 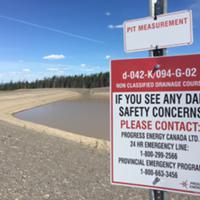 As a result of this second round of inspections, the OGC announced on Nov. 14 that Nexen had been ordered to remove virtually all of the water impounded behind the four dams. These unlicensed dams, according to a short bulletin published on the OGC’s webpage, all showed troubling signs of deterioration, including “slumping, surface erosion and surface water channel erosion” problems.

Nexen was ordered to drain all “live water” from behind the problematic dams. Live water refers to the water impounded by a dam that is above ground level and therefore capable of escaping should a dam fail.

Two other companies were issued orders that day. Saguaro Resources Ltd. (a private, Calgary-based gas production company), was ordered to take action at two of its dams, and ConocoPhillips at one.

Between the May inspections and the subsequent inspections further to the north, it now appears that there are at least 48 unlicensed dams on Crown lands, with an as-yet undisclosed additional number built on private property, primarily farmlands.

Of the 48 Crown land dams, 16 — or one third — have been hit with retroactive orders. Fourteen of those orders were made by the OGC, following belated inspections of the dams. (The orders include the seven issued in May and the seven issued in November.)

B.C.’s Environmental Assessment Office has issued two additional orders. Those orders, as spelled out in documents first obtained by the CCPA, apply to the two largest dams built by Progress Energy — the previously mentioned 23-metre-high dam, known as the Lily dam, and another nearby dam known as the Town dam, which is more than 16 metres high.

Because both dams exceeded 15 metres in height, they qualified as “major projects” under B.C.’s Environmental Assessment Act, and therefore should have undergone provincial environmental assessments before they were built.

Because the company never referred its plans to the Environmental Assessment Office before commencing construction, and because the Oil and Gas Commission failed to stop the company from building the dams, the EAO launched an investigation.

On Oct. 31, the EAO ordered the company to drain virtually all the water from behind these two very large dams and to keep water levels at no more than 10 per cent of their holding capacity, adding that the company was “not compliant” with Section 8.1 of the Environmental Assessment Act.

In the meantime, the EAO continues to consider an extraordinary application by Progress Energy to retroactively “exempt” the two dams from having to undergo environmental assessments at all.

The CCPA and a number of other organizations filed documents with the EAO recommending that the company’s request be denied. The EAO is expected to make its decision early in 2018.

Under the Environmental Assessment Act, companies found to have violated the act can be subject to fines of up to $100,000 for a first offence and subsequent offences can trigger fines of up to $200,000.

Commenting on the proliferation of unlicensed dams during a recent appearance on the Shaw TV political affairs show Voice of BC, Premier John Horgan said that “the revelation” that nearly 50 dams were built on the OGC’s watch in violation of existing regulations was disconcerting.

He added that both Environment Minister George Heyman and Energy Minister Michelle Mungall were aware of the issue and were “working together to try and find ways to make sure that enforcement and compliance can be done in a way that gives the public confidence.”

“At the end of the day, our systems fail if the public has no confidence in them,” Horgan said. “We’re going to do what we can to make sure that the existing Oil and Gas Commission regulatory regime is either being enforced, and if it’s not, we’ll bring in others to do so.”