Steve Burgess is an accredited spin doctor with a Ph.D in Centrifugal Rhetoric from the University of SASE, situated on the lovely campus of PO Box 7650, Cayman Islands. In this space he dispenses PR advice to the rich and famous, the troubled and well-heeled, the wealthy and gullible.

Are you shocked by the Paradise Papers and in particular the federal Liberal party connections they revealed? During the last election campaign Justin Trudeau railed against rich people and their unscrupulous tax havens. Now Liberal fundraiser Stephen Bronfman is found to have money squirrelled away offshore and the prime minister says he is just fine with it.

Will Trudeau pay a political price for this?

Wow. Who died and made you Judge Judy? Suddenly everybody thinks they can point fingers.

Well, let me just say this — Dr. Steve, as his bio above shows, has long enjoyed a special relationship with the Cayman Islands. Dr. Steve chose to obtain his degree in that lovely locale not just for its climate but for its commitment to freedom. He is outraged at those who would cast aspersions on the perfectly legitimate businesses of the Caribbean region and, by implication, the good people who run them. The truth is, Doc Steve only wishes he had more funds to devote to the important regional development projects resulting from such confidential offshore bank accounts. Shame on you for your suspicious mind.

No, let's leave those expressions of high dudgeon to the Official Opposition, currently led by Conservative Andrew Scheer. When Trudeau issued his recent weaselly statement saying he had no concerns about the tax status of the person in question (whom Trudeau could not bring himself to actually name), Scheer was quick to attack. Wealthy Liberal political donors with offshore accounts? Why, it's an utter disgrace. Those people are supposed to be Conservatives. Vote us back into power and we will bring an end to political hypocrisy in Ottawa by being completely unashamed of our reliance on sketchy money. Shady ways, my friends, shady ways.

It is said that nothing is certain but death and taxes. If so the Paradise Papers may reinforce a suspicion that Queen Elizabeth will live forever. Our hardy constitutional monarch is just one of many public figures whose assets were found to be relaxing and sipping fruity drinks decorated with little umbrellas in sunny hideaways.

The Paradise Papers have been a great unifier, bringing together people from all over the social and political spectrum, although perhaps not so much the economic. Donald Trump’s commerce secretary, friends of Vladimir Putin, a major Syrian arms dealer, more friends of Vladimir Putin, a global pop superstar, and three former Canadian prime ministers are allegedly linked to its many files, just as a sampler. Paul Martin, Jean Chretien, and Brian Mulroney are all said to have connections to offshore accounts. U2 frontman Bono, like Mulroney, apparently understands why Irish eyes are smiling every time the account statements arrive.

No illegality is alleged in any of this — no, it is merely the heartwarming “We Are the World” ethos of international banking, a world where differences melt away and everyone recognizes that deep down all of us, no matter our race, creed, or nationality, share the same basic human desire to make sure someone’s else’s money will go to filling potholes and building bridges, instead of your own. 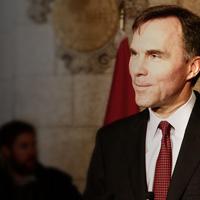 Liberals Trying to Spin Their Way Out of Tax Controversy, Says Prof

The truth is Dr. Steve believes the people who should truly be upset about the Paradise Papers are the ones who aren’t in them, people such as Dr. Steve himself.

Doc Steve knows bitterness is not a good look but still he asks — why not him? He works hard, networks like a sonuvabitch, and has morals and ethics that are so flexible they could teach yoga classes.

Where is Dr. Steve’s slush fund of suspect tax-sheltered cash? Who is more deserving? Dr. Steve has always firmly believed in timeless aphorisms like: “A dollar stashed is a dollar earned” and “Only the good die young.” But it seems the old verities are simply not rewarded anymore.

Dr. Steve is left with only the small consolation of indignation. As he is not included among the ranks of canny billionaires and less privileged multi-millionaires whose money is currently acquiring deep green tans on foreign shores, he can at least object to the activities of those who did make the list.

So I hereby take umbrage. Frankly, Dr. Steve will take whatever he can get.