A new day in federal politics has indeed dawned, with the New Democrats now led by a charismatic, young urban leader — Jagmeet Singh — just as Justin Trudeau’s Liberals have fallen behind Andrew Scheer’s Conservatives in the polls.

It’s a one-two punch for the pugilistic prime minister. A right hook from an Angus Reid Institute poll last week put his party actually trailing the Conservatives for the first time since his 2015 election, with the Liberals dropping to 33 per cent to the Tories’ rising 36 per cent.

Then a left hook from Singh, who is intent on knocking the Liberals out of much of the suburban Toronto and Vancouver ridings they depend on for their parliamentary majority.

And with both Singh and Scheer just 38 years old, Trudeau becomes the “old man” of the three major party leaders at 45!

The energetic and hip Singh, who triumphed over second place finisher and NDP MP Charlie Angus — who I supported — and MPs Nikki Ashton and Guy Caron, represents a huge threat to the Liberals in two ways.

First, Singh has both a formidable following and high recognition in the politically treasured and seat-rich region of central Toronto, Singh’s home in nearby Brampton, Mississauga and Oakville. That area delivered every one of its 24 seats to the Liberals in 2015, while incumbent New Democrats and Conservatives were defeated.

Singh will work hard to regain the NDP’s seven lost Toronto-area ridings and grab more from the Liberals.

One example: in 2015 NDP MP Peggy Nash was in a classic Toronto swing riding that has alternated with the Liberals. Parkdale-High Park elected Nash in 2006 but she was defeated in 2008 by Liberal Gerard Kennedy, then re-elected in 2011 and defeated in 2015 by a margin of just under 1,100 votes.

Those are the kind of ridings that Singh must win next time to at least knock the Liberals into a minority position and likely dependent on the NDP to retain government, with concessions to the social democrats.

But Singh’s urban appeal is doubly damaging to Trudeau because any major leakage of Liberal votes to the NDP could allow the Conservatives to regain lost seats, too, in three-way splits.

Singh will also help the NDP be more competitive in Greater Vancouver area ridings where it lost two seats to the Liberals in 2015 and came close in others, while the Conservatives lost seven.

Again, the Conservatives are grinning at the possibility of more three-way splits that would let them win back ridings lost in Stephen Harper’s last campaign.

In B.C. ridings like Pitt Meadows-Maple Ridge, the Liberals’ Dan Ruimy took away a Conservative incumbent seat with a new candidate by just 1,270 votes, with the NDP close behind with just 2,223 votes fewer than the Liberals.

If Singh catches fire with voters in 2019, those are the kind of small margins than can evaporate completely. Or, the Tories could watch gleefully as the NDP and Liberals split the so-called and mythical “progressive” vote while the right wins the riding.

And for the federal Green Party and its single-seat leader Elizabeth May, Singh is also bad news. He will undoubtedly draw from the Greens’ base of young, environmental conscious, socially progressive voters, making it hard for the Greens to expand their tiny Vancouver Island beachhead once again. 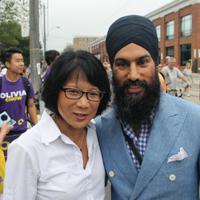 Of course, Singh’s leadership campaign pledge to implement proportional representation without any voter referendum on such electoral system change until two elections later will also undercut the similarly minded Greens — notwithstanding that promise’s undemocratic nature and unlikely implementation.

Regardless of who might win — depending on the extremely variable factor of how an election almost two years away plays out — what is clear is that both Singh and Scheer have already changed the fundamental dynamics, something both parties sought after disappointing results in the last election from Harper and ex-NDP leader Tom Mulcair.

And with that, suddenly the Liberals 30 seat majority over the opposition in 2015 seems stunningly vulnerable.

Singh’s new dawn looks like a nightmare for Justin Trudeau and a possible dream for both the NDP and Conservatives.