On June 6, Foreign Affairs Minister Chrystia Freeland gave a momentous speech in Parliament. You might even call it Canada’s declaration of independence from Donald Trump’s United States.

“To rely solely on the U.S. security umbrella,” she said, “would make us a client state. And although we have an incredibly good relationship with our American friends and neighbours, such a dependence would not be in Canada’s interest. …

“To put it plainly,” she went on, “Canadian diplomacy and development sometimes require the backing of hard power. Force is of course always a last resort. But the principled use of force, together with our allies and governed by international law, is part of our history and must be part of our future.”

Since Trump’s U.S. was abandoning its 70-year role as leader of the West, Freeland said, “We will robustly support the rules-based international order, and all its institutions, and seek ways to strengthen and improve them.”

That wasn’t all: “We will make the necessary investments in our military, to not only redress years of neglect and underfunding, but also to place the Canadian Armed Forces on a new footing — with the equipment, training, resources and consistent, predictable financing they need to do their difficult, dangerous and important work.”

Almost as an afterthought, she reminded Parliament that “Canada is a trading nation,” and would continue to pursue new trade agreements.

Historians will parse Freeland’s speech for generations to come, because it really does signal a break from the U.S. after a century of close alliance. We wanted “No truck nor trade with Yankees” in the 1911 election, but delightedly supported them when they finally entered the First World War in 1917. In effect, we went from 50 years as a British “dominion” to 100 years as an American client state — and we prospered.

The rise of Trump has effectively ended that relationship, and the Trudeau government has clearly been thinking since last fall about how to deal with him. The Freeland Doctrine is not just a reaction to Trump’s latest idiotic tweet; it was carefully thought out for months.

But I have some questions about Canada as a “hard power,” backing up its quiet words with the big stick of a formidable army, navy, and air force. 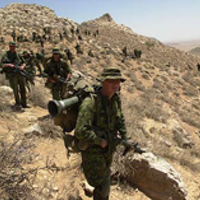 Against, whom, after all, could we swing such a stick? We might just be able to invade Costa Rica, given its fifth column of local Canadians (led by Manitoba Premier Brian Pallister, a longtime Costa Rica resident).

From whom could we purchase adequate weapons, and for what kind of deterrence? Defending Montreal against the Americans, or Nunavut against the Russians? Should we ask the Saudis for the return of our armoured personnel carriers?

No need for cannon fodder

It makes sense to contribute some kind of military force to a new post-American Western alliance, but don’t forget that our revenues will dry up if Trump shuts down our trade in a fit of pique. And we certainly don’t need to supply just a few regiments of cannon fodder to a NATO army trying to keep the Russians from returning.

After all, the Russians appear to have made more gains by computer hacking than they ever did between Stalingrad and the fall of Berlin. The only people in the world still thinking about nuclear war are Kim Jong-Un and Donald Trump; everyone else understands we’re now in a war of wits, not firepower.

Canadian “hard power,” then, is likely to be just a few units like JTF 2, doing discreet dirty work against unpleasant adversaries. Some of those units will hit their targets armed with nothing but keyboards and terrifying hacking skills.

Besides, we know that too many survivors of armed combat return as tormented heroes. How many young Canadians are willing to sign up for military service, knowing that they may well spend the rest of their lives with PTSD, alcoholism, or opioid abuse?

Defence Minister Harjit Sajjan today promised a total of an extra $60 billion over the next 20 years, most of it conveniently postponed until after an election or two. But he and the Liberal government need to give us more details about the kind of military clout they want us to subsidize, now that we can’t count on the U.S. Cavalry riding to our rescue.