[Editor’s note: In the run-up to next month's federal NDP convention in Edmonton, The Tyee welcomes perspectives on where the New Democrats should go from here and who should lead the party. Here is one submission.] 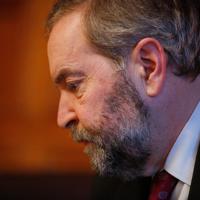 I joined the NDP as a young activist at the tender age of 14 after having studied all of the Canadian political parties. I was promptly put to work knocking on doors with local candidates including Pauline Jewett, a former Liberal MP who became one of our movement's strongest feminist voices in Ottawa as a principled NDP MP. Pauline also became my mentor. She taught me the incredible value of simply knocking on doors as a way to be in touch with what people are saying in a community.

For almost 40 years I have followed her example and have knocked on tens of thousands of doors in my riding -- and across Canada. This offers me an unparalleled "focus group" of Canadians in all provinces with whom I've spoken with at their door. My conclusion is this: Canadians are overwhelmingly progressive and the values of the vast majority of Canadians are social democratic values.

The Liberal Party took advantage of these values during the last election, claiming they would act like a progressive NDP government if they took office. After over four months, one has to ask the question: How have they done?

Sadly, we've seen few kept promises and very many broken promises in the Liberals' first few months as government. This means that more than ever, Canadians need to have the terrific work done by Tom Mulcair and the NDP caucus in the House of Commons to hold this new government to account.

The abandoning by the new government of its promises began soon after the election campaign as it headed to the climate summit in Paris with the exact same targets and timelines Stephen Harper promised. Not surprisingly, Canada was once again the recipient of two Fossil of the Day awards in Paris. One ''award'' was for standing in the way of stronger targets; a second was for refusing to support a discussion on compensating poor countries vulnerable to natural events caused by climate change.

Liberals have also kept in place the Harper government's process for pipeline approvals, adding some window dressing but allowing pipelines such as Kinder Morgan's Trans Mountain to proceed under the old rules the Liberals (and practically everybody else) had denounced.

Aside from this clear hypocrisy when it comes to a new pipeline review process, the new Liberal government is also shirking commitments to First Nations and continuing Stephen Harper's broken First Nations bureaucracy, too. To date, indigenous children are being denied critical medical and orthodontic procedures.

Other broken promises continue to pile up in a whole range of key areas. Despite explicit commitments in the middle of the election campaign to the contrary, the F-35 is absolutely back on the procurement agenda. In fact, the Liberals recently dumped another US $33 million in public funds into the F-35 project. At the same time, Liberals have expanded Stephen Harper's military mission on the ground in Iraq and have made it far more dangerous by issuing shoot-first orders. That's not what they promised in 2015.

While in opposition, Liberals also promised to reverse the destruction of the Canadian Wheat Board by the Harper Conservatives. Now, holding the reins of power, they refuse to keep their promise. In fact, Liberals are now using the same language about ''full independence'' and ''commercialization'' that the Harper team used to undermine the Wheat Board in the first place. The same reversal by Liberals has taken place on commitments to restore home mail delivery to communities that have lost it.

When pressed in the last few weeks to keep their commitments on Employment Insurance, including to stop stealing money from the EI fund that should go to help unemployed workers put food on the table, Liberals moved to abandon those commitments despite the fact less than 40 per cent of unemployed Canadians receive any employment insurance benefits.

Perhaps the best example of just how quickly the Liberals have betrayed their commitments is to look at their first piece of legislation last fall. This new Liberal government made it a priority to expedite tax cuts for some of the wealthiest Canadians with the largest refund benefitting those making just under $200,000 per year.

I could cite a number of other examples, but it's clear that Liberals, elected on promises that were intended to mislead Canadians that they would act like the NDP, have largely copied the Harper Conservatives in the first few months of their mandate on all but a few issues. Many Canadians are gradually coming to understand that real change under the Liberals means really not much change at all.

This brings me to the important issue of our vote next month at the NDP national convention in Edmonton. I will be voting against holding a leadership convention. I believe Tom Mulcair has proven his ability to hold a government to account.

There is no doubt in my mind that Stephen Harper would still be leading Canada without Tom's effective work in Parliament exposing the destructive agenda of the former Conservative Prime Minister. I don't forget that Liberal MPs were often Mr. Harper's strongest allies in Parliament during this same period.

Tom has been called the best opposition leader of the past half-century by some. I have seen first-hand how effective he has been in the House of Commons. I know he is effective, eloquent, and determined to hold a new Liberal government to account for what seems to be an almost pathological ability to break promises made during the recent election.

Voting against a leadership convention does not mean we simply forget the profoundly difficult lessons of the 2015 election campaign. New Democrats have gotten back up and dusted ourselves off and are back, hard at work. We have much to do to renew our party structures, to put in place for next time much more responsive election teams and election strategy, to build our movement, and to ensure that the wisdom and dedication of our grassroots base of NDP activists is reflected in everything we do. This is all work we need to do together, and the convention is an important time to continue this work as we move forward.

We need to learn from our mistakes and look at the road ahead. We need to build our momentum again and continue building on our proud legacy of our movement. We need to push back in Parliament on behalf of all Canadians against a government that has already thrown aside so many of its solemn commitments to those same Canadians. And we need Tom Mulcair leading that fight.