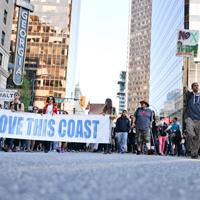 It goes without saying that October 19 was a tough night for New Democrats. And for much of that evening, it was a tough one for me and my campaign team.

As the evening wore on, it looked like I would be the third, sitting B.C. New Democrat MP to lose. In fact, according to many media sources, I was defeated by Liberal Adam Pankratz in the race to become MP for the new riding of Burnaby South.

The media was actually correct, in a way. Pankratz secured more votes than me on Election Day. But in the Advance Polls I secured enough of the votes to pull ahead when all ballots were eventually tallied at the end of the night.

In the end, I was re-elected to Parliament by 547 of the 45,887 votes cast in Burnaby South. So, how did I lose on Election Day, but still pull out the win?

With no control of the central campaign message or advertising, the best any local candidate can do is commit to a focused plan of building strong connections with voters, well before the election, and continuing to strengthen these relationships right up until Election Day.

With these three fundamental building blocks in place, local campaigns can take advantage of key moments in the campaign and secure a win.

The first thing you need to win a campaign is money -- and lots of it.

I was lucky enough to have a local constituency president who understood this and brought in a professional fundraising firm, which undertook mini-campaigns to solicit funds by email, mail and telephone.

These campaigns grew our list of donors from around 100 to over 1,700 by the end of the election, while at the same time speaking to the issues that my supporters cared about.

People were not just giving me money; they were using their wallets to support an MP who would defend what mattered to them.

We raised and spent over $300,000: the $200,000 limit during the campaign, and $100,000 in the pre-election period, during which spending is unlimited. Our fundraising efforts put us on par with those who ran in the 2012 federal NDP leadership contest.

We knew data would be key to our fundraising, voter contact and get-out-the-vote operations.

We decided early in 2014 to use NationBuilder to backstop our effort. NationBuilder is the leading platform used by political campaigns around the world to manage supporter engagement -- and we were one of the few NDP campaigns in Canada to use it.

To take advantage of this new engagement tool, we got expert help from the Winch Institute to train key campaign workers. Winch is a new non-profit in B.C. that aids progressive campaigns by providing support in the use of the latest in data-driven organizing and campaign tactics.

Through these tools and tactics, we developed in-depth profiles of the voters we contacted. This in turn also gave supporters an avenue by which to volunteer, take signs or donate. And, most importantly, we had the ability to track our daily progress on the ground.

The key to our campaign was not only to have natural conversations with voters, but to keep having these conversations over an extended period of time.

We felt these conversations were especially important given changes to the federal riding boundaries meant 60 per cent of Burnaby South voters knew very little about me.

So a full eight months before Election Day, we contracted a seasoned voter contact organizer -- who turned out to be so gifted, we hired her to manage my entire campaign. She recruited and supervised an energetic public outreach team, comprised of local residents to go to doorsteps again and again.

We also hired Strategic Communications, a national campaigning firm that works with the NDP, to phone voters whom we could not reach on the doorstep.

Information poured into our NationBuilder database through these efforts, including voting intention and key issues of concern: housing affordability, ending the war on science, and stopping the Kinder Morgan pipeline.

When the election was called on Aug. 2, we were well positioned in all three key campaign areas.

We knew the names of over 8,500 NDP confirmed and likely supporters in Burnaby South.

And we had a well-trained, seven-person campaign team on salary, five full-time public outreach workers, and 175 very active volunteers.

With the fundamentals in place, we were prepared. So when the national campaign began to falter at the end of September, we didn't just wonder how to react -- we took action critical to our success.

Our seat projection model informed us that our national downturn was indeed hitting Burnaby South. In response, we decided to double-check nearly 2,500 of our identified supporters to ensure they were still supportive. We found 85 per cent were still with us.

We then made a snap decision to pull as many voters as possible in the four days of Advance Polls over the Thanksgiving weekend. The thinking was, get our soft supporters to the polls before they started shifting to the Liberals.

To do this, we boosted our advertising in the local weekly newspaper urging people to vote before Election Day, increased paid phone canvassing, placed reminder notices on the doors of thousands of identified supporters on the first day of Advance Polls, and knocked on their door each day of Advance Polling.

Our internal tracking shows we persuaded nearly 2,500 of the 11,000 NDP supporters we had identified to cast their vote early through these efforts, securing a total of nearly 4,000 votes by Oct. 12.

In the remaining six days of the election, we poured everything we had into finding more supporters and getting out the vote.

Our enormous volunteer team dropped a voting reminder card the Sunday night before the election, going back to the doors of supporters who had not yet voted. Then on Election Day, an even larger crew of 300-plus volunteers worked the phones and visited doorsteps to pull the vote.

Despite losing to the Liberals by approximately 900 votes on Election Day, we squeaked out a 500-vote victory because our advance work had secured us 1,400 more votes than the Liberals in the Advance Polls.

It is hard to believe we had started planning for the election way back in spring 2014, with the objective of recruiting 400 volunteers, identifying 12,000 supporters and raising $100,000. In the end, my team exceeded all our targets.

I believe our dedication to this gruelling work -- coupled with our campaign's ability to accurately identify our declining support and alter our strategy to focus on advance voting opportunities -- saved us.

As a lifelong student of politics, I know you never stop learning.

The most important thing I learned from this election is how incredibly expensive it is to run a professional local campaign. But for all its costs, investing in good people, technology and expertise can help local candidates secure victory in a closely contested race.