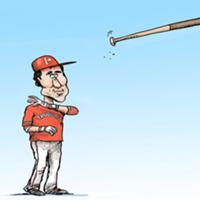 Now that Hope Has Won a Majority…

I am the Prime Minister of Canada. No, really! It's a new day for Canada and there is much to do. However, one thing concerns me. People seem to have rather high expectations for my administration.

Don't get me wrong, we're going to be doing great stuff. I've already revealed the most inclusive cabinet in Canadian history, and next time I promise to find room for dolphins. We're not only restoring Canada Post delivery -- every eligible Canadian will soon begin receiving passionate love letters, sprayed with perfume. (Free postage on all poetry!) And I managed to preside over the demise of the Keystone XL pipeline while ostensibly supporting it. That's because I'm magic.

Still, I don't want people to get their hopes up. Wouldn't it be a good thing to tamp down the excitement a little?

Name the great man who said: "It's better to start with low expectations. That way you have nowhere to go but up."

Did you guess Mike Babcock? Nice try. It was actually Donald Trump, last weekend on Saturday Night Live. Now there's a man who knows how to set the bar low and still somehow limbo under it. And let's be honest, Justin -- you were benefiting from low expectations yourself quite recently. Conservative spokesman Kory Teneycke prefaced an August debate by saying you would beat expectations "if you showed up with your pants on." I can't prove Tenycke was secretly on your payroll but I still expect you to reward him with a Senate appointment. You owe him that.

But now the needle on the Expectations Meter is pinning. Harper is gone and Canadians are excited about the future. As a recent viral Facebook post by the mother of a Department of Fisheries biologist put it: "I feel like I'm one of those post-apocalyptic movies where there's nothing but darkness and sorrow and hard times and then... there's a scene of the sun rising over a new world and it's like everything might just turn out OK."

But, you know, no pressure, Justin.

It's easy now to forget the mania that preceded the 1999 release of Star Wars: The Phantom Menace, back before we were introduced to Jar Jar Binks and young thespian Jake Lloyd. Perhaps that's a bad example -- that movie would have been disappointing if it had been a sequel to Plan Nine From Outer Space. But the let-down was devastating. Now the hopes of the geek world rest on the shoulders of Abrams -- an awesome responsibility.

The whole Star Wars saga seems germane to your situation, Justin. Like you, the Rebel Alliance faced an empire that was totally badass and very much on the wrong side of issues such as the blowing-up of entire planets. But finally the empire was defeated by a good-looking young dude (whose father happened to be a very famous politician). When the Rebel Alliance achieved victory at the end of Return of the Jedi it was, as the Facebook woman said, all peace and sunshine and everything's going to be OK. No more Death Star! Medals for everybody! Major cuts to the military budget! Achieve victory, and roll credits. That's the way to do it. The End, right?

Apparently not. Now there are more movies coming out, which means something must have gone wrong. What happened? Too many Ewoks in the cabinet? Maybe every time someone proposed legislation that paranoid fish-faced guy would yell, "It's a trap!" At any rate, a long time ago in a galaxy far, far away, somebody clearly messed up. It's something for you to consider, Justin. You don't just get to slay the Emperor and call it a day.

Things could be worse for you, though. The High Expectations Club has levels, and you're nowhere near the top. If you want to see someone really shouldering a burden of public hopes, check out Aung San Suu Kyi. The democratic activist and Nobel Prize winner is often known in Myanmar simply as "The Lady." Under house arrest for 15 years, she became an icon whose image adorns t-shirts, posters, and trinkets at roadside souvenir stands all over the country. "She is like my mother," one young woman told me two years ago in Yangon, the capital.

Prevented from becoming president by a constitution engineered by the military junta -- which also reserves to itself 25 per cent of the parliamentary seats -- Aung San Suu Kyi has nonetheless guided her party to a smashing electoral victory. Now she moves from semi-divine mother of the nation to the manager of an awkward political arrangement in which she has no official power and must face an entrenched military power structure while bringing a long-isolated country riven by violent religious and ethnic conflicts into a peaceful, democratic, and prosperous 21st century. Whereas you, Justin, are a hero just for answering questions at press conferences and letting scientists do science. As your new friend Barack Obama could tell you, just be grateful you never won the Nobel Prize.

Your problem isn't new. About a thousand years ago in England, King Canute stood on the shore and commanded the tide to recede. He was actually trying to make a point to his subjects -- namely, that there is only so much a king can do. Generations of malicious press twisted the story to transform him into an arrogant fool. We've come a long way since then -- these days we have Donald Trump, who's figured out you can say whatever you want as long as you're not wearing the crown.

Too late for that strategy, Justin. You won. Now don't let us down.