"In riding after riding across Canada, Greens have proven that if you vote (in large numbers) for what you want, you actually get it." -- Green Party leader Elizabeth May, June 2015 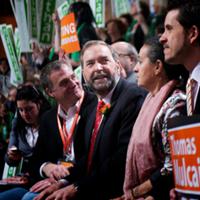 The Greens didn't get it, in riding after riding -- not votes, not seats.

So the Green party's support withered on the vine in the Oct. 19 federal election, and its hoped for "breakthrough" was actually a breakdown that left it with just one seat.

The Greens won only May's seat in Saanich-Gulf Islands; lost deputy leader Bruce Hyer, a turncoat Ontario New Democrat MP who switched to the Green party last session; saw even its high profile candidates finish in third and fourth place; and managed just one runner up in the whole country.

Quite a depressing turn of events for any analytical Green -- much worse than even the NDP's bad election campaign that squandered its chance of winning government or even staying as official opposition, but still took 44 seats.

And the now Stephen Harper-less Conservatives with 99 seats are well placed for the next election under a new leader.

May is packing her bags -- not to leave the Green leadership, but to attend the United Nations climate change summit in Paris -- and rationalizing her latest big loss.

"I'm happy with the result... More important than Green seats is that we saw the end of the Harper era," May said, adding that: "The fear factor slaughtered us."

Those grim results shouldn't make any party leader "happy." But on the fear issue, May knew for four years this ballot would be about stopping Harper -- and the Green strategy failed miserably.

In fact, May didn't follow her own approach outlined earlier in 2015 when the Greens were accused of splitting the vote with the NDP in a way that would let Conservatives win seats.

Writing in The Tyee, George Ehring asked of May: "Why are she and her party actively pursuing an electoral strategy that is almost certain to elect more Conservatives?

"In choosing to run candidates in ridings that have the best chance of electing someone other than a Conservative, Elizabeth May is playing right into Stephen Harper's hands," Ehring wrote.

"She is his best electoral ally, because her party will draw votes from New Democrats and Liberals -- the parties with the only chance of defeating Conservatives. This splitting of the opposition votes is just what Stephen Harper needs to form another majority government."

May countered in The Tyee in a long column that gained many readers and Facebook shares.

"Look at these results," May wrote. "Conservative incumbent won last time with 43 per cent of the vote. The Liberal had 39 per cent. And the Green Party had 10 per cent. Ehring would urge, 'Greens should not run here at all!'

"Those are the numbers from 2008 in Saanich-Gulf Islands.

"2011 results in Saanich-Gulf Islands: I won with 46 per cent of the vote, Conservative cabinet minister Gary Lunn 35 per cent, NDP 12 per cent, Liberals six per cent. (Note in 2008, NDP candidate dropped out of the race.)," May concluded.

May also gave the provincial example of Andrew Weaver, the Green party's first BC MLA in Oak Bay-Gordon Head in Victoria, arguing that the Greens had jumped from nine to 40 per cent in that riding in 2013 to displace BC Liberal cabinet minister Ida Chong.

But May misses a critical point: both in Saanich-Gulf Islands federally and in Oak Bay-Gordon Head provincially, Greens defeated right-wing candidates -- not New Democrats.

Yet in the 2015 federal election, the Greens made environmentally active NDP MP Murray Rankin their number one target riding in Canada -- and failed when ex-CBC host Jo-Ann Roberts lost by 10 per cent.

They also targeted the NDP in Nanaimo-Ladysmith, recruiting former NDP nomination candidate Paul Manly -- but he came in fourth place.

The hard work of beating Conservatives on Vancouver Island was left to the NDP, with Gord Johns beating cabinet minister John Duncan in Courtenay-Alberni and Rachel Blaney winning North Island-Powell River from the Tories.

And in Burnaby-North Seymour, activist anti-pipeline professor Lynne Quarmby finished fourth with just five per cent of the vote.

As it turns out, the Greens didn't actually split the vote in these ridings to let Conservatives win -- perhaps even worse, they made no difference to the results.

So forget about claiming that "strategic voting" hurt the Greens, or the NDP for that matter, because this was "stampede voting" with the Liberals gaining the herd. Those big Liberal vote totals squashed the Greens like a bug, not strategic voting.

Strategic voting actually means casting a ballot for the incumbent MP -- NDP, Liberal or Green -- in opposition-held ridings and picking the opposition candidate with the best chance to win in Conservative-held seats.

But that didn't happen, not at all. The NDP's incumbents were wiped out in the Atlantic; in Quebec, the Liberals, Conservatives and Bloc Quebecois defeated the majority of NDP MPs; and Liberals beat New Democrat MPs as well as Conservatives in western Canada. That means strategic voting utterly failed.

All of this leaves the Green party back at square one, with one seat of 338 in the new Parliament.

May's "beachhead" riding looks more like Dunkirk than Normandy -- a party in retreat rather than advancing -- and with its hopes dashed rather than invigorated by the results.

The Greens can continue to hold out hope for an electoral change to a proportional representation system that might gain it a handful of seats -- something Justin Trudeau didn't promise, but ironically NDP leader Tom Mulcair did.

It remains to be seen if Trudeau's plan to somehow change the electoral system -- without allowing Canadians a democratic vote on it -- will help or hurt the Greens, or even take place.

But even in their best-case scenario, would a Green party with 3.45 per cent of Parliament's MPs make a difference?

In many pro-rep systems like those of Germany, Poland and New Zealand, parties with less than five per cent of the popular vote don't earn seats anyway.

After this election, the Green party looks like a one-trick pony, with one seat and one big challenge: avoid irrelevancy.