Almost invariably, there is nobody less politically minded than somebody who gushes, "I'm a total political junkie!" 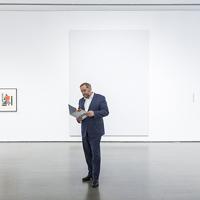 It Wasn't the Night New Democrats Hoped For

What they usually mean is that they are thrilled by the horse-race aspects of politics, the wheeling and dealing; they can't get enough of the panel shows that parse strategy and tactics without ever really getting into who will be affected by a particular set of policies, or how, or in whose interest they're being advanced. In this West Wing view of the world, triangulation and chess-playing are everything; the possibility of genuine political feeling among people who aren't already players is precluded.

The big, unprecedented federal breakthroughs for the NDP came in 2008 and 2011 -- two years of cataclysmic financial crisis and worldwide popular turmoil. 2008 was the year of the crash, the biggest crisis in world capitalism since the Depression, which happened to have been the crucible for the NDP's predecessor, the CCF; it was the year of candidate, then president-elect Obama, and the seemingly unprecedented mobilization of formerly-alienated voters who raised him up.

Slavoj Zizek called 2011 "the year of dreaming dangerously," for Occupy, Tahrir Square, and other massive street uprisings around the globe.

Despite itself -- despite taking Jack Layton, a leader from the party's genuine left, to the tepid centre -- the NDP benefited from the Canadian franchise of what was clearly a global desire for change in both years. In 2015 -- the year of Jeremy Corbyn and Bernie Sanders, the election and re-election of Syriza in Greece -- they were well-positioned to get lucky one more time.

But the people who run the NDP are political junkies. The clutch of strategists who steer the party, incapable of thinking politically or historically, were convinced that the breakthroughs in 2008 and 2011 owed to the fact that they'd suddenly gotten better at sending emails, were suddenly running more efficient campaigns. They favoured what was not only a purely national explanation for what was clearly at least partially an international phenomenon, but one that even more specifically rested on the story of their own personal genius.

The election of a federal social democratic government (whatever's the NDP's vast shortcomings) would have been an historical blow to the country's age-old electoral framework. Instead, the NDP rushed to make the prospect seem like the most modest thing in the world. Strategist Brad Lavigne spoke in an online video about how daunting and impossible Justin Trudeau's path to victory would be, how many more seats he had to win, compared to the tiny hop, skip and jump it was to an NDP majority -- this despite the excitement of 2011's "Orange Wave," of which Lavigne had been an architect, and which had completely upended the electoral map, especially in Québec, making a mockery of early polls or the seat count at the time the writ was dropped.

At some point, late into the summer, Justin Trudeau's team figured out that Thomas Mulcair wasn't going to run as the Jack Layton of 2011. So he could.

There are two explanations for what briefly catapulted the NDP into the lead over the summer: the election of Rachel Notley in Alberta, and the party's initially unpopular but principled position on Bill C-51. Each instance obviously played a role, but which one a person decided was the more important almost always reflected their values: political junkies universally saw Notley's election, the proof that the NDP were responsible and ready for prime time, as the fount of the party's polling successes. For those world-weary apolitical chess players, who like pundits wear their cynicism on their sleeves as a matter of pride and tribal belonging, the alternative -- which relied on genuine, semi-sophisticated political feelings on the part of a large swathe of the general public -- was silly. It is to Trudeau and his team's great credit that they were willing to give the public the benefit of the doubt: Trudeau was wrong on C-51, and Mulcair was right, and only the former learned the proper lesson from the experience.

By the time it came down to deficits versus balanced budgets, Mulcair had already painted himself into a corner, not only fiscally but temperamentally. He had kicked off the campaign by shit-canning a handful of candidates for their statements on Palestine (reminding many of us of the time he hounded Libby Davies; for some of us in the West and in the left our introduction to Mr. Mulcair), and then, when video emerged of him praising the political economy of Thatcherism, he shrugged. Candidate Obama would have taken the opportunity to deliver a defining, inspiring speech about the way we change as individuals and societies, what the left could learn from the right; Candidate Trudeau would have said something vapid and sappy and vaguely evasive. Mulcair shrugged.

Canadians have elected a Liberal majority that, as many observers have suggested, looks strikingly like something out of the 1990s -- the decade when the federal Liberals invented Canadian homelessness, gutted the CBC, and devastated federal transfer payments for health care.

A historical opportunity for Canada's parliamentary left has been squandered, and the parliamentary caucus has been so decimated that even some of the bright young lights that could possibly have been part of finding us a way out of the darkness, like Halifax's Megan Leslie, no longer have the job. The NDP will be in the wilderness for the next several years at least.