"No one is so brave that he is not disturbed by something unexpected." -- Julius Caesar 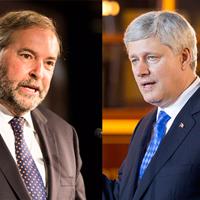 Call it an unexpected doomsday scenario for New Democrats, Liberals and Greens, but the Conservatives have a clear path to stay in power after the election into 2016 -- and then fight a second election -- without Parliament ever sitting.

And with some polls putting the Conservatives in first place, or at least with the best chance of winning the most seats, the odds of them pulling a magic rabbit out of the electoral hat keep increasing.

Despite people like Green Party leader Elizabeth May being in denial -- her party issued a recent flyer claiming "the Conservatives will not form the government after this election" -- exactly the opposite is very likely.

Unwelcome news to many, but here's how it could work.

The Conservatives win the most seats in the new 338-seat Parliament on Oct. 19, but not the 170 MPs needed for a majority, followed by the NDP, Liberals, Greens and Bloc Quebecois.

The order that opposition parties finish in and their seat count are of great interest, but not a major factor in this scenario.

That means as the incumbent, Stephen Harper remains prime minister unless and until defeated in a confidence vote in Parliament.

So Harper doesn't call a session until spring -- and Canada's Constitution only requires Parliament to meet once a year.

This is constitutionally straightforward no matter how many times optimistic Harper haters claim otherwise. In fact, no prime minister has been dismissed by Canada's governor general in our post-Confederation history.

NDP leader Tom Mulcair and Liberal leader Justin Trudeau both say the party with the most seats gets the first chance to form a government.

Mulcair recently said: "The party that forms the next government is the party that has the largest number of seats. That's our constitutional order."

Next, Harper announces he will resign as party leader but remain prime minister until a Conservative leadership contest occurs.

In early 2016, a new Conservative leader is chosen by the membership and becomes the new prime minister. That is tradition both federally and, with premiers, provincially.

The new Conservative PM calls both Mulcair and Trudeau seeking their support to resume Parliament -- presumably they immediately refuse, though a careful reading of their recent statements shows they would not allow "Harper" to continue in a minority situation, not specifically "the Conservatives."

"I think that anybody who has attended a single question period over the course of the last several years would be able to tell you that there is no likelihood that the NDP would ever, under any circumstance, be able to support Mr. Harper," Mulcair told reporters last week.

Trudeau was equally clear: "There are no circumstances in which I would support Stephen Harper to continue being prime minister of this country."

"It's a brand new day," the new Tory leader shouts with joy, outlining significant plans for change after seeing the light.

But because the NDP and Liberals won't give peace a chance, the new prime minister asks Governor General David Johnston to dissolve Parliament and call a new election so the Conservatives can seek a mandate.

And after Johnson agrees, citing past precedents -- debatable or deplorable -- we are into another election in May 2016!

Newly elected MPs of all parties never even get to their desks, and a weary Canada trudges off to the polls again, cursing politicians all the way but unclear which are the worst.

The Conservatives under their new leader -- is it Jason Kenney, Peter MacKay or some other worthy right-winger? -- once again use their enormous fundraising advantage to more than double the spending of the NDP and Liberals.

A re-energized base is both thrilled to see Harper finally gone and relieved their party has a fighting chance at winning the 2016 election.

And while a majority is the goal, they know a minority Tory government will last at least 18 months, since the opposition won't dare defeat them in Parliament to force a third election in 12 months.

Outlandish? Impossible? Maybe, but Canadians keen on ending Harper's reign may be disturbed by the unexpected -- as surprising as what happened to Julius Caesar on the steps of the Senate on the Ides of March.

For those who read the polls, know the Canadian Constitution and parliamentary precedents, and understand how a desperate party can cling to power -- remember Harper proroguing the House of Commons in 2008, for example -- and it becomes an increasingly likely scenario.

Those who discount this possibility probably also disagreed with my own Ides of March warning to the NDP and Liberals in 2011 that defeating the Harper Conservative minority government would end in disaster.

"Friday's opposition vote to defeat the Conservative government for 'contempt of Parliament' was an exercise in self-delusion, testosterone and faulty logic that will surely result in Stephen Harper returning after the May 2 election as prime minister -- and likely with a majority," I wrote in The Tyee on March 29, 2011, with events unfortunately proving the point.

Harper could do it again -- or even pull off a second, even more disturbing scenario, in which the Conservatives are just a handful of seats from a majority on Oct. 19.

In that case, Harper stays on, delays calling a session of Parliament until spring, and works the phones day and night.

"Hey, Liberal MP from New Brunswick! Would you like to join my cabinet? And what does your excellent riding need in terms of federal funding?" Harper might ask in so many words, trying to convince a few good men and women to switch parties.

After all, it took then-Liberal Vancouver Kingsway MP David Emerson mere days to become a Conservative cabinet minister back in 2006, despite repeatedly denouncing Harper -- who is to say either of these possibilities can't happen again with so much at stake?

Unless, that is, the NDP and Liberals stop the Conservatives from winning the most seats on Oct. 19.