"Last month's Muslim rioting in France, this month's clashes between old-stock Australians and Muslim immigrants on the beaches of Sydney -- these may well be portents of a troubled future." -- Right-wing Republican strategist David Frum, December 2005 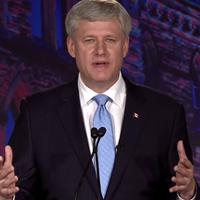 Prime Minister Stephen Harper made no mistake last week referring to "old stock Canadians" versus "immigrants and refugees" -- it was deliberate and calculated.

It is coded language also used by the Republican strategist who helped come up with U.S. President George W. Bush's "axis of evil" phrase to describe Iraq, Iran and North Korea in 2002.

Harper's intent in using the term is clear: it appeals to a right-wing base frightened of immigrants and refugees.

The question remains as to whether the Harper Conservatives' new Australian political consultant Lynton Crosby -- critics call him the "Lizard of Oz" -- put "old stock Canadians" into Harper's talking points for The Globe and Mail debate.

"During the 2005 election, he approved Conservative campaign slogans -- 'It's Not Racist to Impose Limits on Immigration,'" the Guardian newspaper reported in March.

Crosby was a key player in Prime Minister David Cameron majority win in this year's United Kingdom election, another reason Harper hired him.

But Frum -- a Harper fan and Canadian whose sister Linda is a Conservative senator appointed by the prime minister -- has been publicly using "old stock" to describe non-immigrant voters for some time.

Beyond his 2005 comments on "old-stock Australians" and Muslim immigrants, in 2010 Frum wrote: "Because of very low birth rates among old-stock Germans, the proportion of foreign-born is highest among those younger than 20s."

It's unlikely that Harper is not well acquainted with Frum's writing, since he regularly fawns over Harper, as in a 2013 CNN column:

And Frum defended Harper vigorously when he was criticized in a New York Times article in August: "How precisely did the Canadian prime minister silence debate, suppress information, and squelch democracy?" Frum wrote, suggesting the column on Harper lacked facts when they abound, from scientists to Supreme Court justices.

So it's almost inconceivable that Harper -- a well-read, former head of the right-wing National Citizens Coalition -- would not understand the coded meaning of "old stock Canadians."

"Europe is learning that today's refugees are at high risk of becoming tomorrow's high-school dropouts, tomorrow's unemployed, and tomorrow's criminals," Frum, executive editor of the Atlantic magazine, wrote in a July column ominously titled: "Closing Europe's Harbors -- The urgent case for stopping the flow of illegal migrants across the Mediterranean."

Frum has been beating the same drum for years, writing in 2010: "This immigrant population is disproportionately connected to almost all of the social problems of modern Germany."

And in a series of tweets this month, Frum said:

"Wherever stat is calculated - e.g. UK, Germany - non-EU immigrants draw more in benefits than they pay in taxes."

"Immigrants from outside the EU twice as likely to be unemployed as natives."

"Immigrants from non-EU countries are twice as likely as natives to drop out of secondary school."

Harper's debate comments were nowhere near as inflammatory, but seem rooted in the same basic argument -- that immigrants and refugees are trouble.

Harper used the phrase "old stock Canadians" in response to a question about changes to health care available to immigrants and refugees.

"The fact of the matter is we have not taken away health care from immigrants and refugees. On the contrary, the only time we've removed it is when we have clearly bogus refugee claimants who have been refused and turned down.

"We do not offer them a better health care plan than the ordinary Canadian receives. I think that's something that new and existing and old stock Canadians agree with," Harper concluded.

When asked the next day what he meant, Harper carefully avoided repeating the phrase -- and was less-than-clear in explaining why he used it or what it meant.

Not convincing -- nor is it likely someone using coded language would then explain what the code actually meant.

Harper's comments are a pale version of Frum's foaming invective, but the intent of his "old stock Canadians" is clear -- to appeal to a right-wing base frightened of immigrants and refugees, to motivate them to vote in this election.

And it's an approach that's reason enough for voters to reject Conservative politics of fear.