When the going got tough for Stephen Harper's campaign this week, his brain trust faced a fork in the road. Should they soften up a bit, signal that Harper isn't the ruthless, controlling, divisive character that many increasingly perceive him to be? 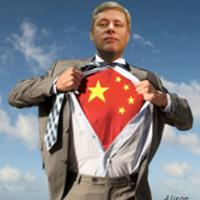 Or should they bring in a political "rottweiler" who specializes in fomenting wedge issues, abusive exchanges, and winning, most recently, conservative victories in the United Kingdom and Australia?

They went with option two. The rottweiler's name is Lynton Crosby. Knowing more about Crosby offers a window into not only how the Harper team hopes to salvage this election but what they believe have been the keys to gaining and holding government for the past near decade. Here, therefore, are eight things to know about the Australian his fans call "an evil genius" and critics have named "The Lizard of Oz."

1. Lynton Crosby is a tobacco lobbyist.

As reported in the New Statesman and the Guardian, his firm was hired by Marlboro cigarettes maker Philip Morris International in 2012 to fight against plans in the U.K. to sell cigarettes in unbranded cartons. Crosby used his access to top echelons of government to argue against the policy, designed to remove the glamour from smoking and save lives. His company's other clients include the alcohol and fracking industries.

2. Lynton Crosby is officially contemptuous of most public opinion polling.

3. Lynton Crosby specializes in sneaking up to win when everyone assumes his party's losing.

Crosby, acknowledged to be "the man who really won the election for the Tories" this spring in the U.K., did so by capitalizing on a moment when his Conservative clients were assumed to be tanking. It's a cautionary tale given how close Canada's race is, and how unreliable polls are, no matter how alluring they are to horse race obsessed media.

According to the Guardian: "Crosby's cleverest trick of all was to make it look as if the Tory campaign wasn't working. From February onwards, as the polls seemed to show Labour and the Conservatives deadlocked, Tory commentators and senior party figures… began complaining in coded language about the campaign that Crosby was masterminding.… [W]hile many of the Conservatives' opponents and many journalists and voters were assuming that the Tory campaign was drifting or stalling, Crosby's well-funded infantry were quietly, busily seizing the marginals. Another of his favourite electioneering phrases is 'below the radar.'"

4. Lynton Crosby for years has been helping guide Harper.

"We were fans of Lynton Crosby before many people knew who Lynton Crosby was," Harper campaign spokesperson Kory Teneycke told the Guardian, which goes on to report:

"Teneycke said Crosby has given the party 'formal and informal advice' over many years, adding that the Australian adviser met with the campaign team a couple of months ago and has been helping the party with analysis of research and polling.

"'I'm not going to comment on the specific nature of the relationship but it's a close one and an ongoing one and one that predates this campaign,' he said."

5. Lynton Crosby is no stranger to smearing refugees.

His Australian Liberal leader candidate John Howard claimed in 2001 that "Afghan boat people were throwing their children into the sea -- using moral blackmail to enter Australia.* The myth was disproved and claims that the tactic had dragged Australian politics to a new low continue to haunt the retired prime minister – and Crosby," reports the Guardian.

6. Lynton Crosby is cut from the Rupert Murdoch mold.

He managed four campaigns for Australia's Liberal Party (the conservative party there) and masterminded Conservative London mayor Boris Johnson's 2008 and 2012 victories, while also hiring on to steer Conservative PM David Cameron to a majority win last May. In short, an Australian who can't resist a good fight against Labour.*

At least according to a politician who employed him. London mayor Boris Johnson has described Crosby as "a man who never lets an abusive thought form in his mind without immediately forming it into a text and sending it to the object of his wrath."

"Crosby, who has drawn comparisons to George W. Bush's campaign chief Karl Rove, is known for bringing a sharp focus to campaign messaging," reports the Guardian.

"But he also comes with a reputation for an aggressive style and a playbook that includes negative campaigning and so-called 'wedge politics' -- a tactic using often controversial social issues to split voter opinion in their favour."

A second Guardian piece includes this: "There are those who think that Crosby's cynical, divide-and-rule approach to elections will be bad for the Conservatives in the long term. 'He has conjured up memories of the nasty party,' says Tim Bale of Queen Mary University of London, a leading historian of the Tories. 'That's not going to help them in 2020, 2025, 2030.'"

Another Guardian profile quotes one of Crosby's opposing strategists: "The hallmarks of the Crosby campaign are negative campaigning, often around race or immigration. It's the type of campaigning that involves really tearing at the fabric of society for shorter term political gains."

He added: "A political party doesn't take that road unless it feels like it's in quite a lot of trouble… In politics, it is entirely possible to excite negative attitudes in the community and turn them into votes, but that can come at a terrible price. It can undermine community harmony and attitudes towards tolerance. He has probably one of the world's best capacities to utilise this sort of campaigning."

You can watch a Lynton Crosby master class in political campaigning below.