Stephen Harper chose the Calgary Stampede (now Rachel Notley country) to launch the theme of the now full-blown election campaign. Harper proclaimed he was confident that "this October Canadians will choose security over risk." Let's hope so. The question is, of course, what kind of security and risk are we talking about? Political language is never simple or straightforward. It is subject to sophisticated manipulation by professional word-smiths and public relations experts. The choice of what language to use is subject to hundreds of hours of deliberation and enormous resources, because if you get it right, you usually win. If you get it wrong, well, it's a lot harder. Getting it right means no one even suspects you of manipulating them. 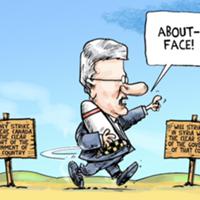 How Harper Turned Canada into a Rogue State

Experts in the art of issue framing will tell you that those who frame an issue first have a huge advantage, because they force their opponents to reframe it -- in other words get you to take the time to reconsider what the words actually mean. Maybe that is why neither the Liberals nor the NDP have taken the trouble to challenge Harper's framing of the security issue as exclusively a foreign policy and military issue: security against terrorism.

That's unfortunate, because not only is Harper vulnerable on his own limited anti-terror grounds, he is extremely vulnerable when it comes to the kind of security that actually affects millions of Canadians. When it comes to economic and social security, the vast majority of Canadians haven't been this insecure since the Great Depression.

It's not as if we don't know the numbers -- 60 per cent of Canadians just two weeks away from financial crisis if they lose their job; record high personal indebtedness; real wages virtually flat for the past 25 years; a terrible work-life balance situation for most working people (and getting worse); labour standard protections that now exist only on paper; the second highest percentage of low-paying jobs in the OECD; young people forced into working for nothing on phony apprenticeships; levels of economic (both income and wealth) inequality not seen since 1928. Throw in the diminishing "social wage" (Medicare, education, home care, child care, etc.) and the situation is truly grim.

Most of these insecurity statistics are rooted either directly or indirectly in 25 years of deliberate government policy designed by and for corporations. Governments have gradually jettisoned their responsibility for economic security, slowly but surely handing this critical feature of every Canadian's life over to the "market" for determination. Economic policy has been surgically excised from government responsibility to citizens and is now in the singular category of "facilitating investment" -- a euphemism for clearing the way for corporations to engage in whatever activity enhances their bottom line.

From corporate rights agreements (which constitutionalize corporate power) to the decades old "independence" of the Bank of Canada (independent of democracy); from irresponsibly low corporate income tax rates to punitively low social assistance; from Employment Insurance that only 30 per cent ever qualify for to taxes grossly skewed in favour of the wealthy and a Charter of Rights and Freedoms that has bestowed citizenship status on the most powerful and ruthless economic entities on the planet, Canadian governments have abandoned their citizens to the vagaries of an increasingly unregulated capitalism. This is not even a complete list, but it demonstrates just how corporate globalization and its promoters like Stephen Harper have created the greatest insecurity for Canadians virtually in living memory.

The brilliance of hiving economic security off from democratic governance is that it has been so gradual and systematic that we have all come to accept it as if it were ordained by nature. There are no angry anti-austerity marches here, and as a result there is no political party basing its platform on such a sentiment (the NDP seems desperate to mimic the Conservatives' and Liberals' dedication to balanced-budget idiocy). We have never been so fearful of our economic future, but we have been convinced that we (even those of us with full time, low-paying jobs headed for the food banks to make ends meet) are somehow to blame.

As for the kind of security Harper likes to talk about, we are in fact less secure now under the Conservatives' policies than we have ever been. Harper's foreign policy could easily make us targets for the very "jihadists" that he rails on about. His involvement in the destruction of Libya, his aggressive stance in Afghanistan, the carte blanche he provides Israel in its brutal oppression of Palestinians in Gaza and the illegal occupation of the West Bank, and his comically ineffective "engagement" in the war on ISIL all contribute to terrorists identifying Canada as a reasonable target for retribution.

If we actually had some smattering of national interests in the Middle East, it could be argued that the risk is worth it. But we don't. The net result is not only increased national insecurity but the trampling of our rights to privacy and our civil liberties with Bill C-51 -- legislation that does nothing to enhance our defence against terror but dramatically undermines our personal security as citizens.

The Harper Conservatives could still eke out a minority government in the October 19 election. If they do it unchallenged on their fraudulent promotion of enhanced security for Canadians, the NDP and Liberals will have no one to blame but themselves.