Stephen Harper's greatest booster for the 2015 federal election unfortunately can't vote for him: Michael Zehaf-Bibeau died last October in a hail of bullets. 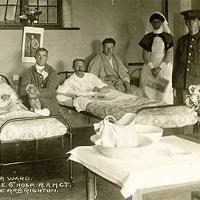 The Forgotten Lesson of Jan Bloch

In the space of a few dramatic minutes, Zehaf-Bibeau saved the Conservative Party of Canada from having to fight an election on the economy, and threw them the lifeline of a dubious war.

Prime Minister Stephen Harper, a guy who reportedly cowered in a closet while the guns roared in the hallway, has collected his wits and mapped out a whole new course to a new majority with admirable speed. By parlaying one mentally ill drug addict into a terrorist threat, he created the embryo of a Canadian police state in Bill C-51. Meanwhile, riding on the slipstream of the Americans' attacks on the Islamic State, he has found an unrelated casus belli, a cause for war, just as George W. Bush did after 9/11.

In doing so, Harper has vindicated Archimedes, who said "Give me a lever and a place to stand, and I will move the world." Michael Zehaf-Bibeau gave him the lever, and the Islamic State gave him a place to stand.

So seven months (or less) before the next election, Harper is a war prime minister like Mackenzie King -- effectively bulletproof for the duration. And the duration is likely to last through next fall and perhaps to 2020.

Harper's announcement that raids against the Islamic State would now extend into Syria was met with predictable praise from the "experts" -- even former ambassador Paul Heinbecker, who said we have a "moral imperative" to "attack targets inside Syria."

The ambassador should know that moral imperatives have nothing to do with diplomacy. Diplomacy, like politics itself, is amoral. Both are about dealing with fools and scoundrels to get the best possible deal for your own people. A true moral imperative would make us accept thousands of Syrian refugees while aiding millions more.

It's a very selective morality that attacks the Islamic State in Syria while not attacking Boko Haram in Nigeria, or Russia in Ukraine, and attacks no one at all to protect the millions slaughtered and raped in the Democratic Republic of Congo, Sudan, Somalia, and other failing states.

The media and academic war pimps have generally fallen into line with Harper, while dutifully and objectively reporting the opposition's views far down the story. They have no truck with moral imperatives; they just want to speculate on how Justin Trudeau is handling this.

Legally, of course, Harper is jumping into the proverbial quagmire. Foreign Minister Jason Kenney on Tuesday said our current bombing of the Islamic State is at the invitation of the democratically elected Iraqi government. Then on Wednesday Kenney claimed the right of self-defence under the UN Charter's Article 51, which states:

Nothing in the present Charter shall impair the inherent right of individual or collective self-defence if an armed attack occurs against a Member of the United Nations, until the Security Council has taken measures necessary to maintain international peace and security. Measures taken by Members in the exercise of this right of self-defence shall be immediately reported to the Security Council and shall not in any way affect the authority and responsibility of the Security Council under the present Charter to take at any time such action as it deems necessary in order to maintain or restore international peace and security.

The Security Council, of course, isn't authorizing air raids on Syria -- it's the member state under armed attack, not Canada. A U.N.-sanctioned war, in theory, is the only kind a U.N. member state should engage in. In practice, even those wars tend to end badly (remember Libya?).

The awful truth is that no advanced nation can afford to take much punishment. That's why they don't fight each other any more: The political consequences are too dire.

The Somalis laid down "Mogadishu rules" in 1993 when they killed 18 American soldiers in the "Blackhawk Down" incident and the U.S. pulled out. In this the Somalis were following the model of the Beirut truck bombers of 1983, who killed 299 French soldiers and U.S. Marines. Ronald Reagan and the French pulled out of Lebanon forthwith.

The French learned this lesson in Algeria, and they and the Americans learned it in Vietnam: Voters don't mind when their kids kill foreigners in large numbers for no clear reason, but they just hate it when their own kids get killed the same way. Canada learned it in two world wars and Korea, and thereafter found peacekeeping a wiser policy.

Harper and the Conservatives are peace babies, classic Bush-style chicken hawks. They've grown up with a volunteer-staffed Canadian Forces of around 70,000 active personnel -- roughly one Canadian in 500. Few of us are related to one of them.

In the 1960s and '70s, the U.S. Army was largely composed of conscripts (including me). Every family had some skin in the game. The Americans had tolerated a peacetime draft for a long time, but when middle-class kids started dying in Vietnam, their parents took a terrible vengeance on the commander-in-chief, driving Lyndon Johnson from the presidency. Not until 9/11 could the U.S. start another war of choice against anyone bigger than Panama or Grenada.

By then the U.S. military was all-volunteer, and therefore sealed off from the people who paid for it. Saving Iraq with draftees was beyond the powers of Bush and Cheney, and they didn't even try it.

The way to sell a war, they found, was to brand it as an abstract struggle between good and evil somewhere far away. The casualties would be droves of foreign evildoers and a handful of heroes, who would get their pictures on the front page when they died. Those who came home merely screwed up or maimed could be safely forgotten.

This strategy got Bush re-elected, and his successor failed to indict him for war crimes (or to shut down Guantanamo). Stephen Harper must hope that a similar strategy will get him through a perilous spring and summer and then safely home with a second strong, stable, majority government.

How else could he sell himself to the voters? He's touted himself as the guardian of our economic interests, while running up our deficits and promising a balanced budget real soon now. As viceroy of the Oil Patch, he bet the country on exporting expensive oil, and now the Oil Patch is drowning in its own product. We get endless warnings about a housing bubble, job growth has been at record lows for over a year, and the available jobs are crappy part-time ones.

With no end in sight, the economic downturn would demolish Harper and the Conservatives in the next election. But with a sanitary, low-casualty, far-away war to distract people, and Bill C-51 to silence critics, he might just scare enough voters into giving him four more years of the same -- while also running up as big a deficit as he likes.

Meanwhile the Islamic State will be happy to cooperate, whether it inspires our mentally ill or sends its own terrorists. Each outrage will provoke more Canadian response, and damn the cost and the balanced budget. Muslim Canadians will serve the same purpose as the Japanese Canadians after Pearl Harbour: a convenient target for racist bigotry.

But it will all be just entertainment, something to watch on TV or tweet about. We'll ignore the fact that we've become a rogue state, flouting international law. We'll ignore the puzzled looks our allies give us; after all, we were among the key framers of that law after World War II.

Having bet the country on expensive oil and lost, Stephen Harper is now doubling down and betting it on an election-winning war. It's an enormous gamble, and he must know how easily it could blow up in his face. He must therefore also know how bad the economy really is, and how it will worsen by October. Sooner than face certain defeat, he prefers to gamble Canadian lives and honour on a far-away war.