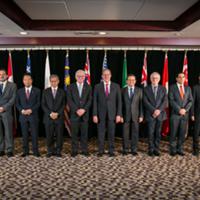 Would you sign an important deal where the details were secret until after your name was inked on the page?

An agreement that you are told will be great, but could either cost you your job or boost your pay, help or hurt your working conditions, and allow you to be sued if you break the rules you haven't yet seen?

Of course not. That would be insane.

But that's exactly what Prime Minister Stephen Harper's Conservative government wants to do -- sign a deal we can't see that affects trade with 11 other countries, including major partners the United States and Japan.

You've probably never even heard of the Trans-Pacific Partnership Agreement, but Canadian International Trade Minister Ed Fast flies to Hawaii on July 28 for meetings that could finalize the secret negotiations.

However, big business sure knows the TPP -- and loves it.

"The TPP is the biggest game on the planet in terms of trade negotiations," wrote the Canadian Council of Chief Executives, the Canadian Chamber of Commerce, and the Canadian Manufacturers & Exporters in a letter endorsing the unseen deal.

"We've got to wait and see the actual text of the agreement, consider it, consult the public and then decide," Davies told me this week. "The Conservative government approach to trade is to conduct negotiations in utter, total secrecy -- they've shut out Parliament."

Canadians are totally in the dark, Davies said, but not big business because "a select group of insiders have been briefed on it."

'We have to be defensive': NDP's Davies

In fact, the only real details emerging from TPP talks came when WikiLeaks published a secret draft chapter in January detailing how foreign companies would be able to directly "sue" governments through an Investor State Dispute Settlement process outside of Canada's legal system.

That means multinationals could force taxpayers to compensate them for any health, environmental, land use, financial or other government policies that they claim don't give them "fair and equal treatment."

The biggest possible threats to Canada include our dairy and poultry industries, where "supply management" regulations protect domestic farmers -- that is, marketing boards that regulate domestic production and put high import tariffs on foreign producers.

TPP also endangers copyright and privacy protection laws as outlined in The Tyee, with TPP being described as "digital free trade."

"There is a potential plus to being at the table and in an agreement, but there are also threats," Davies said. "This is a U.S.-dominated trade deal -- and they protect their interests.

"Canadians should approach TPP with a balanced perspective. There is a cost of being out. We have to be defensive," he said.

That view contrasts with Harper's heavy emphasis on getting a deal and telling Canadians to trust him, and the federal Liberals' position of endorsing the TPP while wringing their hands and saying they'd try to improve it later, as they did on Bill C-51, the Conservative security legislation.

"It would be really devastating for Canada to be left on the outside, and it's the job of the government to negotiate a deal that benefits all sectors of the economy, absolutely including the supply-managed industries," Liberal MP and trade critic Chrystia Freeland said in June.

Kind of hard to tell how devastating when we don't know almost anything about it, other than it's very secret.

"Negotiate in secret, put a gun to the heads of your opponents, and try to force them to agree," Davies said. "Ultimately it's unproductive."

The exclusions have led many observers to conclude the deal is aimed at reducing the influence of China.

"The trade deal isn't primarily significant because of the economy. It matters because it's part of the broader American geostrategic goal of containing China -- which pointedly hasn't been invited to join the TPP," writes Noah Feldman, a Harvard professor of international law.

Meanwhile, Davies worries about how well-protected Canadians will be in a trade agreement with Brunei and Vietnam, which are not democracies.

"We are dealing with countries that do not meet normative, minimal standards in labour, human and environmental rights," Davies said, noting that Brunei has imposed a law that can punish same-sex acts with stoning to death.

"A country that has laws that are anathema to American values doesn't deserve to be in our trade negotiations," said California Democratic Representative John Garamendi. "We need to send a clear message."

Malaysia is also repressive to gay, lesbian and transgendered people, whose rights are routinely violated by federal and state authorities.

So far, Canada's message has been clear -- no rights, no problem.

And then there's the unprecedented secrecy surrounding all aspects of the Trans-Pacific Partnership.

The TPP draft chapter released by WikiLeaks shows that the U.S. has classified the text to keep it a secret.

"Even if current negotiations over the trade agreement end with no deal, the draft chapter will still remain classified for four years as national security information," law professor Margot Kaminski wrote in the New York Times.

"National security secrecy may be appropriate to protect us from our enemies; it should not be used to protect our politicians from us," she wrote.

"It is incomprehensible to me that the leaders of major corporate interests are actively involved in the writing of the TPP, while the elected officials of this country have little or no knowledge as to what is in it," Sanders said.

Secrecy, violation of human rights by potential partners -- none of this worries big business in the least.

In one of a series of opinion pieces salted through major media, the Canadian Manufacturers and Exporters even had the nerve to say that TPP endorsement is a no-brainer, unless -- shudder -- "partisan politics" intervene.

"Canada's participation in TPP should not be a tough decision, and even with an election looming, it is too important to be held hostage to partisan politics. Canada needs to be part of the TPP deal as soon as it is concluded," wrote CMA vice-president Jeff Brownlee.

Never mind that the most partisan prime minister Canada has seen is pushing the TPP through without legislative scrutiny or public consultation -- what's good for big business should be good for everyone!

Nice try. Here's the real bottom line on the TPP: no details, no deal. It's that simple.