I am not familiar with the papal encyclical as a literary genre, but I know good writing when I read it, and Laudato Si' (Praised Be), Pope Francis's remarkable defence of the environment and the poor, is very good writing indeed. It is also a brilliant political stroke, steering a battered Catholic Church into a global force to be reckoned with. 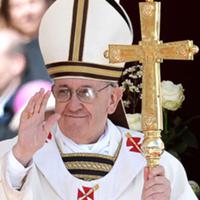 The Two Sides of Pope Francis I

I have no idea what language Francis composed Laudato Si' in (Spanish? Italian? Latin?), or how many committees had a say in its content. The English translation, at least, bears comparison with Gregory Rabassa's brilliant translations of Gabriel Garc&iacutea M&aacuterquez. And like the Colombian maestro, the first Argentine pope has a distinct and powerful Latin American voice and sensibility.

Literary critics will soon be poring over Francis's long, rolling-thunder sentences, interrupted by the shock of one-liners that read like lightning bolts. He has transformed the encyclical from administrative memorandum to Biblical prophecy -- all the more devastating because he utterly lacks the prophets' rage.

Polemicists will also study Laudato Si' as a master class in propaganda -- it was the Church, after all, that coined the term for propagation of the faith. But neither environmentalists nor climate deniers are likely to match Francis's gravitas and authority. He is the first Jesuit pope -- trained by an order cordially feared and hated by many other Christians for its members' intelligence, erudition and powers of argument.

All those traits are on display in Laudato Si'. Meticulously documented, the directive invokes not only St. Francis but popes John XXIII, Paul VI, the swiftly sainted John Paul II, and the now-retired Benedict. Rather than yanking the Church into an unfamiliar direction, Francis tells us, he is simply guiding it to the next step on a trail blazed by his predecessors. But he is also speaking to everyone, not just Catholics.

Organized in six chapters, the encyclical first sets up its main themes: pollution and climate change, water scarcity, loss of biodiversity, worsening quality of life and the loss of social values, global inequality, and our generally dismal responses so far.

Chapter 2 argues Christianity's credentials as "the gospel of creation," an environmentalist faith. Persuasive though he is, nonbelievers might wish for the pope's explanation of why Christian nations have nonetheless done so much damage to the planet.

The third chapter, "The Human Roots of the Ecological Crisis," spreads the blame more generally, asserting that we have all become too fond of technology, turning it into the basis for an "anthropocentric," selfish view of the world as object to be exploited for personal benefit.

"Integral Ecology" in Chapter 4 attempts a synthesis in which the environment, the economy and society influence one another. Francis makes some interesting points; for example, that "the environment" is what we call the relationship between nature and our societies, and that ecosystems "have an intrinsic value independent of their usefulness."

He argues that social ecology depends on strong institutions; "Anything which weakens those institutions has negative consequences, such as injustice, violence and loss of freedom." In other words, Francis is not just throwing together a grab-bag of issues like deforestation and poverty; one leads directly to the other.

The true cost of our vices

Having built this argument, the pope then uses it to launch what seems like a throwaway line: "Drug use in affluent societies creates a continual and growing demand for products imported from poorer regions, where behaviour is corrupted, lives are destroyed, and the environment continues to deteriorate." An abstract argument suddenly becomes very concrete, reminding us of the true cost of our vices.

Francis then segues smoothly into attack on poverty, citing bad city planning, poor housing, inadequate transportation as ecological obstacles to building a healthy, interactive community. In a direct rebuttal to Thatcherism's "There is no such thing as society," he offers the concept of "the common good," which gives both groups and individuals "access to their own fulfilment."

What is to be done? In Chapter 5, "Lines of Approach and Action," Francis discusses forms of dialogue "which can help us escape the spiral of self-destruction which currently engulfs us." He discusses the world summits on the environment that tend to fail for lack of political will, but also the effective international agreements on hazardous waste, trade in endangered species, and protecting the ozone layer.

Strikingly, he rejects carbon credits as "a new form of speculation... a ploy which permits maintaining the excessive consumption of some countries and sectors." Francis also argues for a degree of state planning that would have been anathema in the late 20th century. He wants laws to lay down "rules for admissible conduct in the light of the common good."

A key point of Laudato Si', after all, is that the market should be a servant, not a master. (He almost seems to regard the free market as a Christian heresy, with the Father, the Son and the Holy Ghost usurped by the Market, the Consumer and the Invisible Hand.) "Politics must not be subject to the economy," Francis says, "nor should the economy be subject to the dictates of an efficiency-driven paradigm of democracy."

In his last chapter, "Ecological Education and Spirituality," the pope warns that "Obsession with a consumerist lifestyle, above all when few people are capable of maintaining it, can only lead to violence and mutual destruction." Getting beyond that lifestyle is the task of environmental education -- not just science-based facts, but a serious critique of "individualism, unlimited progress, competition, consumerism and the unregulated market."

That critique, Francis says, could be carried out not only in schools but in the media and the churches, but especially in the family, "to create a culture of shared life and respect for our surroundings." He hopes for the emergence of "ecological conversion," a "spirituality grounded in the convictions of our faith." Those converted should developed "a prophetic and contemplative lifestyle, one capable of deep enjoyment free of the obsession with consumption" -- "to be happy with little," a condition he calls simply "sobriety."

Encyclicals are directed at the clergy; they are guidelines on how priests and bishops should themselves guide their congregations. Much of Laudato Si' is clearly aimed at highly educated readers. One early passage on climate change, for example, shows a Flesch-Kincaid grade level of 14.9 -- that is, you'd need almost three years of university to understand it.

Hence his frequent use of short, powerful one-liners beautifully suited to Twitter as well as to strong, punchy sermons:

"The earth, our home, is beginning to look more and more like an immense pile of filth."

"The emptier a person's heart is, the more he or she needs to buy, own and consume."

"Leaving an inhabitable planet to future generations is, first and foremost, up to us."

"For indigenous communities, land is not a commodity, but a gift from God, a sacred space."

"Earth is essentially a shared inheritance, whose fruits are meant to benefit everyone."

"We should be particularly indignant at the enormous inequalities in our midst."

This is highly incendiary stuff, and the pope is clearly aware that not all his bishops and cardinals will want to propagate this kind of revolutionary faith. But his encyclical frequently credits the clergy of various nations (including the Canadian bishops) for their endorsements of countless key points. They are on his side whether they want to be or not.

Others are less willing to accept Francis's radicalism, least of all the U.S. Catholic Republicans now vying for their party's presidential nomination. The free-marketeers are of course scandalized, not to mention social conservatives and climate-change denialists. It is only a matter of time before they start sounding like the early Protestants who fumed about the evils of "papistry."

But the pope has now acquired a considerable army of new allies: scientists, environmentalists and advocates for social justice. He has also gracefully sidestepped the deserved criticism of the Church for its countless crimes, from its silence during the Holocaust to its priests' pedophilia and the generations of abuse it inflicted on Canada's First Nations children.

The present governments of majority-Catholic nations face a really serious problem. Far from being the opiate of the Catholic masses, Laudato Si' looks like political amphetamine, dispensed free from the pulpits of every cathedral and the lecterns of every Catholic school. Neither leftist nor rightist governments will be happy with the resulting social uproar.

Through it all, the Church will again influence affairs of state as it did for centuries. It is, after all, almost 2,000 years old. Starting as just another cult in a remote province of the Roman Empire, it grew until it replaced the empire itself. Its chronic corruption is depressingly well documented, yet it has repeatedly found the people and resources to see off all its enemies -- from Nero to Attila, from the Protestants to the Soviets.

Now, under Pope Francis I, the Catholic Church has dramatically renewed itself for the next few generations. It may not save all our souls, but it is saving its own.