I was standing amid a sea of orange at Ottawa's quintessential NDP-friendly watering hole the evening of May 5. 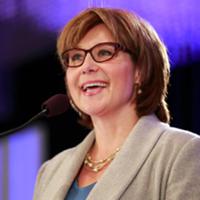 As we watched the poll ticker surpass the 44 seat mark, seasoned MP Peter Stoffer stood on a chair in the far back corner of the bar, raised his glass of Boddingtons, and proclaimed:

And cheer for her we did -- some actually cried. There were even a few Liberal staffers in the mix who couldn't resist joining the party, if only vicariously.

But for women watching that night, we knew that this meant more than the obvious ideological shift in one of the most deeply-entrenched Conservative provinces in the country.

What mattered wasn't just that an NDP caucus had taken down a 44-year-old Conservative dynasty. Nor was it the fact Notley had unequivocally dominated the leaders' debate that may have precipitated these election results. Not even the fact that this would be the first New Democratic majority in Alberta; the biggest win for an NDP government since Jack Layton triggered the Orange Wave.

What mattered most was that this newly-elected 54 seat caucus was comprised of 46 per cent women, and not once has Canada seen a government caucus so close to gender parity. It's peanuts compared to Germany or Rwanda, but for Canada, this is unprecedented.

As Notley aptly put it, this isn't just a historic win for the party -- this is a historic win for all women in Canadian politics. And if we owe this win to any one person, it's Rachel Notley herself. Her humility and charisma shone through for the duration of this campaign, and it paid off in spades.

In the traditional sense, the media hardly tore her down to the extent we're accustomed to seeing with, say, Kim Campbell or Belinda Stronach or the staple queen target for sexist media of the free world, Hillary Clinton. In many ways, the media made quite a remarkable anomaly out of Notley and her "Crue."

Her family life and background as an activist and labour lawyer were widely overlooked. Her wardrobe was seldom commented on; not remotely as often as her magnetic demeanour. No one even talked about her blonde hair (what?).

So what can we attribute this to?

For one thing: I think most pundits can attest that the #MathIsHard fumble was nearly as detrimental to Jim Prentice as #BindersFullOfWomen was to Republican Mitt Romney. With or without that slip, Prentice really didn't do so well in that debate.

Perhaps the years of scandal, entitlement and party division had groomed a smoother path for Notley. Maybe the climate was more accessible given Alberta's record of electing women premiers -- media were already poised to deliver less sexism, more substance.

In hindsight and from a safe distance, really the only apparent sexist media rolled in post E-day.

Incredibly, the bulk of such criticism was not personalized or even overtly sexist. In a quick cursory search, any criticism one may stumble upon is aimed at the NDP party as a whole for its "lack of experience," the odd outdated reference to Bob Rae, or cynical contrast coverage relating to Andrea Horwath.

Despite this pleasant turn of events, I would be remiss if I didn't note that during her victory speech, Notley thanked her late father, a life-long socialist and former leader of the Alberta NDP, for exposing her to politics at a young age. In the blink of a Westminster eye, a tidal wave of coverage poured in about said ambitious father figure who raised and inspired Alberta's new premier-elect. Much of it set off "soft sexism" alarm bells.

I suppose there will always be the odd columnist scratching his head, wondering how a seasoned public figure with more estrogen than testosterone could earn her title independently. By this logic, there must have been a man somewhere close by, feeding her strategies and ideological know-how.

I mean, she took on three male political adversaries simultaneously -- and won. She couldn't accomplish so much by her own volition, could she?

Why yes, like many women before and hopefully after her, she could, and she did.

So let's savour this for a while, shall we?