It's been a few weeks since the NDP swept to power in Alberta, and bastions of the political right are already exploring the upper stratosphere of hyperbolic fear mongering. As if rehearsing for a production of Dracula, free market celebrity Kevin O'Leary told the Business News Network that the NDP is a "disease" and "the dark force itself" that will "drag Alberta into the abyss." 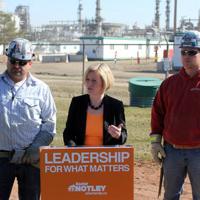 For Notley, Eight Steps to Reform the Broken Petrostate

Musing about our irksome democratic process, he lamented, "We can't eradicate this disease; you can't just make the NDP illegal." He apparently sees hope in curing the electorate of its errant ways by bringing Alberta "to its knees."

Since he brought up the subject of disease, let's consider another potential vector of pestilence: the neocon contagion that took root in this country some 40 years ago. Alberta was patient zero in this ideological infection that has since spread to Ottawa and many other parts of our nation.

Last week, to widespread surprise, Alberta displayed a nascent yet defiant resistance to the economic doublespeak that has plagued Canada for decades. People are fed up with the empty rhetoric that endless tax cuts will somehow fund public services or pay down ballooning debt -- largely racked up by right-wing governments. Voters are weary of leaders seemingly in league with extractive industries rather than the taxpayers they are legally and duty bound to represent.

In many ways, Alberta is the obvious place for this political pivot to happen. Blessed with the lion's share of Canada's remarkable resource bounty and a relatively small population, the province has seen some $1.7 trillion in petroleum extracted -- even valued at today's depressed prices.

In spite of rock-ribbed conservative ideals and over 40 years of uninterrupted Progressive-Conservative rule, the province was on track to be $30 billion in debt by 2020. Even true believers in decades of right-wing doctrine were starting to shake their heads at how this was possible. How could such an undeniably rich place be forced to lay off thousands of health care workers or delay the construction of a much-needed cancer treatment facility while resource companies have for years carted away billions in profits?

The root of Alberta's ailment can arguably be traced to Margaret Thatcher, who famously said, "There is no such thing as public money, there is only taxpayers' money." This and other simplistic bromides spawned an entire school of economic thought in her honour. It is also, quite simply, bollocks.

Money does not magically manifest from the financial sector or its bombastic figureheads. It originates from resources. And resources remain largely the property of sovereign nations and the public their governments represent. Hence the perpetual war from the political right on the very project of government -- and the pesky public oversight and taxation of resources that come with it.

There is a medical term to explain infectious outbreaks called epidemiologic triad. It refers to the three parts needed to sustain disease: an infectious agent, an attractive host and circumstance to bring them together.

Canada is the fourth richest country in the world based on resource wealth, and our inventory of timber and petroleum alone is worth some $33 trillion -- a highly attractive host for the spreading contagion of neo-conservatism in the 1980s. Adjusted for population, we are the second wealthiest country in the world, just after Saudi Arabia.

Since Canadian provinces control resource development, Alberta, with its prodigious petroleum bounty, was an even more irresistible target to those spreading Thatcher fever. Convincing independent-minded Albertans that governments should have limited scope was not a difficult sell. However, undermining the courageous work and strong resource oversight of the Peter Lougheed government, which introduced the Alberta Heritage Savings Trust Fund, would take patient and persistent effort.

A veritable forest of right-wing think-tanks sprang up in Canada, including the so-called Calgary School, the Frontier Centre for Public Policy and the Fraser Institute. Millions in largely anonymous donations flowed into these conservative coffers, rewarded by charitable tax receipts.

Was this a profitable investment? By 1987, all royalty contributions to the iconic Heritage Fund ceased. Alberta collected only $4.38 per barrel of oil equivalent in 2013 -- one twentieth the amount captured by Norway that same year.

While the economy of Alberta has deteriorated into an inarguable failure, seen through another lens it has been an unbridled success. Those unnamed corporate donors to conservative think-tanks have reaped enormous rewards by accessing globally scarce resources at rock bottom prices. How? By investing in public opinion.

It was a remarkably successful strategy, until the NDP came out of left field with a viable political alternative to the tired PC regime led by Jim Prentice. Who saw that coming? Apparently not Kevin O'Leary. With a healthy majority and another election fully four years away, some backroom business interests accustomed to calling the shots in Alberta are left to bellow from the sidelines.

Will it be trouble-free for the new Notley government? Hardly. As evidenced by recent cacophonous commentary, there are obviously outside interests committed to seeing Alberta fail. But many parties in the business community are willing to work with the new government rather than fight a spiteful and costly war that would last at least 16 financial quarters.

Markets know very well that wealth originates from resources. Canadians as resource owners are finally starting to waken to this, too. Some pundits may posture and snarl, but the whip hand is with the public, and always has been. A more equitable and mutually prosperous future can be negotiated, and may ironically produce public buy-in and certainty that has always been absent in our rather colonial country.

Notley's NDP is not a "dark force" or a disease. It is a moderate and democratically elected government with a mandate that many political parties can only dream of. If anything, it represents an ideological immune response that is long overdue in this country. Let's hope it's catching.