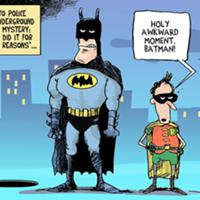 I noticed quite a few parades happening across Canada this weekend. What was that all about? St. Patrick's Day?

Good guess. But those were mostly happening outside Irish pubs at 2 a.m.

No, the marches you noticed were about something else. It seems a great many Canadians are concerned about Bill C-51. In cities across the country, citizens took to the streets to protest the Harper government's proposed security legislation that will grant CSIS and the RCMP sweeping new powers. Among the items being swept may be your constitutional rights. The bill would establish standards for justifiable arrests that resemble the informal rules currently being employed by the police department of Ferguson, Missouri.

It's understandable that you didn't notice the marches, Justin, since you have thrown Liberal Party support behind Bill C-51. It would make your attendance at an anti-C-51 rally awkward to say the least -- rather like showing up at a St. Patrick's Day parade in a Margaret Thatcher mask. Besides, I'm sure you're still busy debriefing Tory turncoat Dimitri Soudas on all his inside party secrets. Good idea -- better get that done while it's still legal.

Still, you would think this sort of grassroots Canadian protest against Harper overreach would be just your thing, Justin -- a perfect chance for you to emphasize the bright new dawn that could result from a Liberal victory. Your entire pitch has been based on a change of tone, a move away from the fear and division of Harperism toward a new era of sunshine and positivity. Goodbye, bad old politics of negativity -- hello, Justin Trudeau and the Liberal Party.

What do you get instead? A Montreal anti-C-51 march -- including NDP leader Tom Mulcair -- that aimed straight for the Liberal party headquarters. You're part of Team Harper on this one. You might as well have been standing on the ramparts with the prime minister, defiantly facing the protesters while holding hands and singing "We Shall Overcome."

Fear of terrorism has been running high thanks to trials on both sides of the country and vague threats thrown at Canada from ISIS and Al-Shabaab. You surveyed the polls and decided that it simply wouldn't do to allow Harper to manoeuvre the Liberals into position for a "soft-on-terrorism" attack. It was a purely political calculation -- perhaps even a savvy one. But Harper knows he has put you in a damned-if-you-do-damned-if-you-don't situation. Leave yourself open to attack from fear-mongering Conservatives? Or alienate your natural constituency on the centre-left? You chose the latter option. Justin Trudeau: He'll KO ISIS just like he pummelled Patrick Brazeau. Can he tackle terrorists by abrogating democratic freedoms like his old man? Just watch him.

But the price you pay is higher than that paid by any other Canadian leader. You more than anyone suffer from looking like just any old compromising hack. And for what? A bill that in all likelihood will never survive its first constitutional challenge. You had the opportunity to take a principled stand and later be proved correct by the Supreme Court. Instead you are Harper's poodle.

Politics is expediency. The sad fact is that no matter how often people claim they want leaders to display integrity and unyielding conviction, they will generally punish any politician foolish enough to display such attributes. What people really want in politicians are unyielding convictions that perfectly match their own unyielding convictions. That's why it is so tricky -- and often self-defeating -- to position yourself as the anti-politician, the one who does not grasp at every passing popular issue. You set yourself up for the inevitable charges of hypocrisy. Might as well get a big Janus tattoo on your manly chest.

Politicians who hope to survive tend to do as you have been doing lately -- putting straws into the wind, gauging the public mood, and reacting accordingly. They do things like taking toxic Eve Adams into the Liberal Party just to gain access to the nasty Conservatives secrets possessed by the equally toxic Dimitri Soudas. Politicians do that sort of stuff. And you're a politician. It just doesn't look so good after you've been so busy painting yourself as a cross between Eleanor Roosevelt and Sponge Bob Squarepants. I think you missed the parade on this one, Justin.