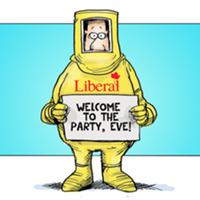 Ever since the discovery of the Toronto Terror Tunnel I've been frantic with worry. Then it was revealed that the so-called terror tunnel was just two dudes building an underground tree fort. Now I'm mildly depressed. What is wrong with me?

Your problem is clear. You suffer from a condition known as VFRD -- Vague Fear Repository Deficiency. You've lost something, as have we all. Far from being a problem, the Toronto Terror Tunnel was a boon, a national panacea that has now been taken from us. It's no wonder you're blue.

The underground passage was discovered near Toronto's Rexall Centre which will be home to Pan Am Games events. The tunnel was about 10 metres long and close to two metres tall, well constructed, shored up with wooden supports, and wired for electricity. It was impressive enough to be have been dug by Charles Bronson and friends under a prisoner-of-war camp. Speculation began immediately. Who dug it and for what nefarious purpose? Did the 10-metre passage travel 10 metres in the direction of, say, Syria? Hey, does anyone remember that scene in The Dark Knight Rises where Bane and his terrorist brigades make an entire football field cave in during the game? Does anybody know Batman's cell number?

Terror! As the prime minister tells us, it's everywhere. A terror tunnel beneath Toronto! And Somali terror group Al-Shabaab making terror threats against West Edmonton Mall! Somalia to Edmonton is a pretty long bomb-toss, but nonetheless a number of cheerleading groups were sufficiently concerned about the threats to cancel their participation in a scheduled competition. (For those groups that do attend, it would be wise to avoid cheers like "Four! Six! Eight! 10! We'll destroy the Great Satan!") West Edmonton Mall officials must regret decommissioning those submarines they used to have. Now they'll have to combat the terrorists with only mall food and confusing maps.

But it wasn't only the Harper government that found in the tunnel's mysterious depths a deep well of paranoia. Anti-Harperites too were hard at work theorizing. I had Twitter exchanges with a couple of people who suggested darkly that the tunnel was a Harper plot. They had no doubt where the tunnel was leading -- it was a passage to the passage of Bill C-51. How convenient that it was uncovered just as the government sought support for their new surveillance program. Stephen Harper, that loathsome spider in human form, weaving a subterranean web to ensnare us all. You'd think with all the resources of government he'd have managed something a little longer than 10 metres, but these days even Conservatives fear-mongers have tight budgets.

Alas, it turns out the solution to the mystery was more prosaic. The tunnel was the work of two anonymous young men building a "man cave." A Tunnel of Bromance, as it were, a place to hang out and just be dudes being dudes. A pretty impressive project, actually; after all the trouble Toronto has had with subway expansion, it turns out all they really needed to do was motivate enough young men to build safe places to drink beer and look at porn without actually having to move out of Mom and Dad's basement. They'd have a new underground tunnel system in no time.

But that's why you're bummed out, DAP, and the rest of us too. The tunnel was not just some handyman's hole in the ground. It was a focus for all our fears and suspicions. It was a magical space waiting to be filled with vague anxieties of every sort.

That's why I am calling for a new national project, a venture to rival medicare and the coast-to-coast railroad. I want to see the construction of a new National Repository for Vague Unease. It doesn't really matter what form it takes so long as it is perplexing and puzzling, bewildering yet somehow sinister -- a suspicious space to be filled with the suspicions of suspicious people. Conspiracy theorizing is the preoccupation of the age, and paranoia flows like bile through the body politic. It needs an outlet. Together we can build something special, a place to harbour our anxiety, something that each and every one of us will hate and fear for reasons all our own. Together we can foster the mutual mistrust that unites us all. Let's get digging.