Relationships, whether labour or romantic, are always complicated, and last week the longstanding romance between B.C.'s building trades unions and the BC Liberals seemed to hit the rocks. The organization that represents unionized trades workers announced it was headed to court to fight a set of anti-labour policies that BC Hydro wants to implement at the Site C dam on the Peace River. 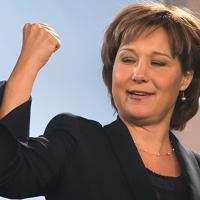 The Crown corporation plans to make Site C an "open site" for both unionized and non-unionized contractors, and had for some time insisted on language that would have prohibited union organizing on the job site itself. That language has since been removed at Premier Christy Clark's request.

The BC and Yukon Building Trades Council had fruitlessly opposed the plans in private meetings with Hydro for almost a year, according to Tom Sigurdson, the council's executive director.

"We believe it is a violation of the [Canadian Charter of Rights and Freedoms], because workers are allowed to join unions when they want to join and unions are allowed to organize non-union workers into their membership," Sigurdson told the Journal of Commerce on March 2.

Sigurdson could be forgiven if he felt like a jilted suitor, after starring in a number of government photo-ops over the past two years, appearing at cozy press conferences with the premier to announce apprenticeship programs tied to gas development, and refusing to join other B.C. unions in opposing pipelines that carry tarry bitumen through the province.

After helping Clark burnish her "friend of the worker" credentials, Sigurdson might have hoped that Hydro would approve the kind of project labour agreement at Site C that has governed every major dam project in B.C. since the WAC Bennett dam was built in 1963.

Such agreements allow for both union and non-union contractors to bid on the publicly funded work, but require that tradespeople working for both kinds of contractors be paid equivalent wages. They provide for a coordinated approach to safety, apprenticeship training and the hiring of First Nations, women and local workers by all contractors on site.

Sigurdson told The Tyee that the Hydro approach, which would see different contractors able to pay different wages for the same kind of work on the dam by tradespeople, would be "chaos."

The announcement of a court challenge from Sigurdson's council was enough to prompt an overnight response from the premier. On March 3, she declared that Hydro got at least one thing wrong -- the proposal to ban unions from enlisting new members at Site C.

"I think BC Hydro took this a step too far," Clark told the Journal of Commerce. "In the last 24 hours I've spoken to ministers, and I've spoken to the CEO of Hydro, they agree with me on that."

Only a partial reversal

Sigurdson welcomed the premier's prompt intervention, but said it didn't go far enough. "We thank Premier Clark for standing behind B.C. workers. But more revisions need to be made to BC Hydro's new approach to labour procurement for Site C," he stated.

Clark differed from her Hydro executives by declining to defy recent Supreme Court rulings recognizing that the Charter protects workers' rights to associate, organize and strike.

Beyond that, she seemed to be on side with the Crown corporation's radical attempt to erase the past practice of the last half century -- the project labour agreements that allowed earlier B.C. governments to build major dams with minimal labour strife and maximum benefits for the public.

And that remains unacceptable to Sigurdson, who said his organization's court case will proceed for now, in hopes that it will inspire further reflection in Victoria.

The Building Trades Council's disinclination to fold up its legal challenge because the premier has come out in favour of respecting the Canadian constitution on Site C makes sense. The union leadership could be forgiven if they see the premier's partial reversal of Hydro's proposals as a result of their decision to go public and play hardball in court.

But if the unions were to give up their challenge to the remaining provisions of Hydro's plans, they would be signing off on an arrangement that aims to turn back the clock and erase a half century of progress that has been, on balance, good for B.C. in general and for workers in particular.

It is good news for workers that the Building Trades Council is going to continue to pursue this matter. It would be even better news if this latest series of unfortunate events prompted the Council and other labour organizations to critically assess whether cozying up to fundamentally anti-labour bodies like the BC Liberals is really a viable strategy for progress.

That remains a vital debate within the labour movement, and one that has not yet been definitively resolved.