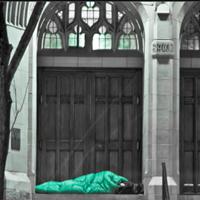 Pity the homeless in Burnaby or Surrey, because both municipalities are avoiding their social responsibility by refusing to open shelters for those in need.

Voters in those municipalities should be asking why. Why are Vancouver, New Westminster and other cities in the region doing more than their fair share while Burnaby and Surrey shirk their duties?

Sadly, it's unlikely that homelessness will be a major issue in the Nov. 15 municipal elections in either city, but pressure should be put on all candidates to do the right thing.

It is ironic that two of the most popular politicians in Metro Vancouver -- Burnaby Mayor Derek Corrigan and Surrey Mayor Dianne Watts -- are the ones declining to act on an obvious and pressing need.

Burnaby, astonishingly, has no homeless shelters at all, and adamantly refuses to construct any, blaming the province for any problems.

And for the second year running, Surrey will not have a winter shelter because city officials claim they can't find a location where neighbours don't fear its presence.

Burnaby Mayor Corrigan has been clear: the homeless are just not his concern.

While no one should disagree with supporting the working poor, Corrigan's comments seem particularly harsh. And he didn't stop there, adding that: "The people [in shelters] are the impossible to house... so addicted that all they worry about is the opportunity to feed their addiction, whether it's alcohol, drugs or anything else."

Last week, Councillor Paul McDonnell of Corrigan's Burnaby Citizens Association argued the same position: "How are you going to cure homelessness if you can't cure the person?" he said.

Others might ask, how do you cure a person when they have no home? Those who help the homeless say a safe shelter is the first step.

Why? "People are scared to have programs of that magnitude in their community," Shayne Williams of Lookout Emergency Aid Society told 24 Hours Vancouver last week.

My Vancouver business office is next door to a new supportive housing unit that opened in 2012 thanks to the city, province and the non-profit MPA Society, and unfortunately some businesses and residents did oppose its construction.

But luckily they were unsuccessful, and since its opening residents of the Katherine Sandford Apartments have been no problem -- and lots of people in need are getting help.

Former City of Vancouver advocate for the homeless Judy Graves explained succinctly why some of my neighbours shouldn't have been worried.

"But homeless people are just people who don't have a home. And as soon as they have a home, they cease to be homeless people and they start to look better... and will just become very indistinguishable from the rest of the community. That always happens, and it will happen here," she continued.

Vancouver made it a priority

Vancouver Mayor Gregor Robertson, who I support, has been criticized for setting his government a challenging goal of ending street homelessness by 2015.

But Robertson made it his priority, and worked with the province to open new shelters, buy single room occupancy hotels run by slum landlords and turn them into decent, low-rent accommodation, create 600 new social housing units opening this year, and pledged to keep trying.

Not in Burnaby. Not in Surrey.

High-sounding words blaming other levels of government don't cut it for those in freezing cold, rainy weather who desperately need a warm, dry place to stay, and a hot meal.

Obviously there must be safeguards and sensitivity to community concerns when locating shelters.

But for big cities like Burnaby and Surrey to refuse to accept their responsibilities to the neediest in our communities is heartless and shameful.