Mayor Gregor Robertson's pledge to wipe out street homelessness by 2015 took a hit today, with the release of figures from this year's Metro Vancouver homeless count showing a slight increase in the number of people living in the region without a home. 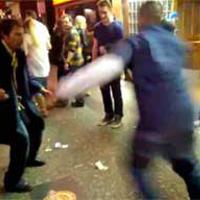 A total of 2,770 people were found homeless on March 12, the day of the 2014 count -- up five per cent from the 2,650 counted in 2011. The news raises questions about the feasibility of the mayor's promise, and also about efforts made so far.

For Tony Roy, executive director of the B.C. Non-Profit Housing Association, homelessness is a solvable problem.

"There are many issues people suffer from that we haven't found a solution for, but homelessness isn't one of them," Roy said today in a media release. "We have a cure for homelessness: it's called a home. There is no reason for people to be suffering when we have the tools and resources at our disposal to help them."

The results released today are preliminary figures, with the final report scheduled for release in July.

For those watching the issue, the increase in regional homelessness did not come as a surprise. Last week, city manager Penny Ballem unveiled figures that suggested the results of this year's count would be disappointing.

In a presentation to council, Ballem outlined the loss of 150 single room occupancy (SRO) units in the Downtown Eastside, 208 funded interim housing spaces, and 55 winter shelter beds in the city, in addition to delays in the provision of new social housing, over the last year.

According to DJ Larkin, who works for Pivot Legal Society, Ballem's presentation highlighted some of the main causes of homelessness in Vancouver today, which include high rents, low vacancy rates and increasing gentrification.

Perhaps the most disheartening figure revealed by the count was a 26 per cent increase in the unsheltered homeless population in Metro Vancouver. A total of 957 people were identified as unsheltered, 199 more than in 2011.

This includes people living outside or staying temporarily with others and using homelessness services on the day of the count. Of the 957 unsheltered homeless people, 538 were found within Vancouver city limits.

The mayor blames three drivers for the increase. "The numbers tell a simple story: with fewer shelter beds, a delay in opening several hundred new supportive housing units this year, and the loss of decent SRO rooms at welfare rates, more people were left outside on the street," Robertson said at a news conference this morning.

Aboriginal people continue to represent about one-third of the homeless population in the region, the count shows. Of the 582 homeless people that identify as aboriginal, 347, or close to 60 per cent, are unsheltered.

The preliminary count also shows an increase in the number of people under 25 counted as homeless, from 397 to 410. This year, however, youth represented 20 per cent of the homeless population, as compared to 24 per cent in 2011.

Individuals 45 and over represented 43 per cent of the homeless population in 2014 compared to 40 per cent three years prior.

In an interview earlier this week, retired advocate for the homeless in the City of Vancouver Judy Graves said the big economic boom after Expo 86 marked the beginning of the city's troubles with housing the vulnerable and marginalized.

"Homelessness is actually a sign of prosperity," she said. "A city where there is no prosperity will have a high vacancy rate, and everybody can live inside. When the city becomes prosperous the rents go up, and gradually people wind up without a place to live."

Simply put, the tension between the rising cost of housing and stagnating incomes pushes many onto the streets, Graves said. Those suffering the most are those on fixed income, welfare and minimum wage, who become slowly less and less able to afford the housing options available to them, she said.

For Larkin, the solution to homelessness continues to rest on a new definition of affordability. "Affordability should be, by the national standard, no one paying more than 30 per cent of their income on housing and no one being housed in places that are too small or too run down," she said.

Both Larkin and Graves said that finding a lasting solution will require bringing together all levels of government.

Said Graves: "The city needs to stop the gentrification of SROs in the Downtown Eastside. The province needs to fund more subsidized and supported housing. And at the federal level we need to be looking at new housing programs for the homeless right across the country."

Though she's beaten the same drum for many years, Graves remained optimistic that Vancouver can make progress.

"Huge strides have been made; strides that when I started working 15 years ago I could not have anticipated," she said. "You can lose some battles, but we will win the war. We will do it."