"What is the point of requiring non-problem drinkers to forego their pleasure or pay more, for no good in return? And what is the good of taxing problem drinkers more, if it does not address the harm?" -- Godfrey Robson, International Center for Alcohol Policies 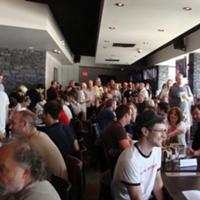 As the BC Liberal government scrambles to make its ridiculous "unhappy hour" slightly less objectionable, the big question remains unanswered: why have a minimum price on alcohol at all?

The answer annoys both the government, which loves telling people what to do, as well as the academics and doctors it listens to. But the reality is that the minimum prices introduced in British Columbia last month for beer, wine and spirits don't fix the problems they're intended to solve.

They only mean that happy hour, when drinks are supposed to be cheaper, get more expensive.

Yet on Friday, Yap lowered the minimum price on pitchers of beer, but not pints, from the 25 cents an ounce announced last month to 20 cents an ounce.

Campaign for Real Ale Society spokesperson Paddy Treavor said in an interview Sunday that the change doesn't make sense: "They've lowered the price on the biggest serving size. I don't see how that promotes health and safety. And we still have the highest priced beer in Canada."

What seemed like a dumb BC Liberal move soon looked pretty devious. Some of their biggest financial supporters are those chains.

Regardless, there is evidence that imposing minimum booze prices and raising the cost doesn't always work to limit alcohol abuse.

Raul Caetano, professor of epidemiology at the University of Texas School of Public Health, said good intentions can backfire.

"There may be situations where the intent of the taxation is reversed, in that alcohol consumption increases rather than decreases because the alcohol of choice has become cheaper. Basically, they buy more and end up drinking more," Caetano said about a 2006 study in the journal Alcoholism: Clinical and Experimental Research.

"In general, the evidence suggests that as you increase taxes, and alcoholic beverages become more expensive, individuals tend to use alcohol less," Caetano said.

"However, the findings in this paper indicate that the reality is not so simple, because there are alcoholic beverages at different levels of price, and when you implement taxation, what happens is that the individuals who are able to purchase the alcoholic beverages that were more expensive just switch to less expensive ones."

Nonetheless, Dr. Lawrence Loh of the Fraser Health Authority disagrees, arguing that a 2013 study found alcohol-related injuries would drop by nine per cent for every 10 per cent price increase.

That 2013 report for the Institute of Alcohol Studies was co-authored by University of Victoria psychologist Tim Stockwell and was used in the failed attempt to support introduction of minimum prices in the United Kingdom, which was rejected last year.

Nevertheless, the U.K.'s Conservative-Liberal Democrat coalition government, which had promised a "minimum unit price" for alcohol in 2012, was ultimately unconvinced.

Easier to price than address abuse

While minimum pricing is controversial, it's still an easier if ineffective fix for governments than looking at some of the root causes of alcohol abuse.

Heavy drinkers, or those who got drunk more than once a month, tended to be found more among males under 60 years of age who did not have a college degree. Those who were unemployed or unmarried also had higher risk factors.

Caetano said that while more Caucasians, Hispanics and African-Americans reported drinking between 1992 and 2002, meaning drinking in general has increased, only Caucasian women consumed more drinks per person than the previous average.

Clearly none of these factors can be easily remedied. Nor will higher booze prices change your age, education, employment or relationship status, gender or other risk factors -- just the price.

Minimum alcohol prices are regressive, like other taxes that disproportionately and negatively impact lower-income people more.

In other words, those drinking expensive Champagne are not as affected by $2 more a glass as the working poor, students and others.

The reality is that problem drinkers won't change their destructive behaviour simply because of higher prices. The rest of us will just pay more -- unhappily.

If you believe Happy Hour should mean lower, not higher, drink prices, join my new Fix BC Happy Hour page on Facebook.