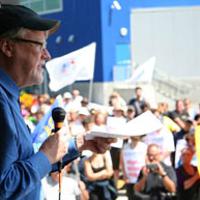 When the company owned by the world's fifth richest man challenges 350 unionized workers in Richmond, B.C. and demands they take concessions, you know it's a David versus Goliath fight.

But IKEA workers now locked out for a year won't give in to billionaire owner Ingvar Kamprad.

The lockout illustrates the difficult challenges faced by organized labour in B.C. when a small group of local workers is pitted against a big, multinational corporation.

It's not just IKEA workers in Richmond who are having trouble with their employer -- IKEA has been accused of labour rights violations by workers in the United States, Turkey, Russia, France, Italy Ireland and other countries.

The company has been mired in several international controversies, including the 2012 admission that for up to 30 years political prisoners in forced labour factories in East Germany were manufacturing products IKEA sold in Europe.

"We deeply regret that this could happen. The use of political prisoners has never been acceptable to the Ikea Group," Jeanette Skjelmose, the company's sustainability manager said at the time.

But the "flat pack" furniture giant lumbers on, and the year-long dispute that has left about 300 Teamsters members on the picket line and about 35 workers crossing it to work at the still partially-open store continues.

For its part, IKEA is standing pat, saying that the stumbling block to get a new contract is what happens to the 35 workers.

"We are committed to going back to the bargaining table with or without a mediator in an effort to reach a fair resolution -- but the union needs to demonstrate a willingness to bargain on all open items," IKEA Canada's Madeleine Löwenborg-Frick wrote via email on Sunday. "It is the Teamsters' refusal to bargain on the expelled employees that is prolonging the strike."

"We're not asking for those workers to be fired and never have. They could be transferred to another store or moved into management," Dawson said on Monday. "The company is trying to make that the issue, but it is within their own power to resolve it."

Talk about a Goliath: IKEA owner Kamprad was estimated by Bloomberg to be worth a staggering US$41.8 billion in 2012, putting him just behind Microsoft mogul Bill Gates.

Kamprad even left Sweden in the 1970s to live in Switzerland, in protest of his home country's high taxes. He only recently returned after Sweden's centre-right government abolished a wealth tax and reduced income taxes.

Kamprad's enormous wealth puts IKEA workers and their union at a serious disadvantage.

IKEA could indefinitely ignore the dispute, which it argues is a strike, without noticing any painful loss in revenue. Of the company's 12 stores in Canada, only one other, in Montreal, is unionized.

If the company has an Achilles heel, however, it is in its Swedish roots and professed values of corporate social responsibility.

"IKEA's low prices must never be achieved at the expense of people or the environment. That is a condition for doing good business," IKEA's website states.

"By co-operating with companies, trade unions and organisations, we are able to learn, share experiences and accomplish more than we could have done by working on our own," IKEA also says.

That stated commitment is why the Teamsters have enlisted the help of Nordic union organizations to help publicize the company's corporate behaviour, which they allege includes demanding concessions, encouraging and rewarding employees who crossed their own union's picket line, promoting contact with LabourWatch, a group that helps decertify unions, and delaying bargaining.

But do the Teamsters have enough resources and the workers enough time and resolve to put the pressure needed on IKEA to end the dispute?

An international union strategist from London who observed a Nordic labour delegation's fact-finding mission on the dispute warned about the challenge.

"If you're going to challenge a big company, you need to work across borders, because [picketing] one store in Richmond is not enough to get the message across," Erin van der Maas of the International Transport Workers Federation told The Tyee last November.

Peter Lövkvist, secretary of the 400,000 strong Nordic Transport Workers Federation, visited with Richmond workers and also met with IKEA in order to write a report titled "How IKEA Is Hurting Families." Lövkvist seemed shocked at IKEA's indifference to its local workers.

"IKEA has a good reputation in Sweden. It's a good employer. But it seems the farther away from Sweden they get, the worse IKEA gets in labour relations," Lövkvist told The Tyee in November.

Fight gone on 'too long': IKEA

The Teamsters' Dawson said that IKEA is feeling pressure, with its Richmond store suffering.

"They don't have the full store open -- there is no restaurant or kids' room, no returns or exchanges -- so obviously it's having an impact," Dawson said. "There is a marked reduction in the number of vehicles going into Richmond."

But IKEA's Löwenborg-Frick disagrees. "The attempted boycott has not affected our business. Most importantly, it is not a productive measure that will get the parties closer to a resolution," she said.

"The store is open and has continued to run successfully through some of our busiest times. Everyone in the store is working hard to serve the more than 1.25 million visitors who have continued to shop at IKEA Richmond during the strike. We have no reason to believe that we cannot continue to operate as we are," she concluded.

"The guys on the picket line are watching these other people walk in happily every day and collect their pay. It's a very emotional thing," Thompson told Business In Vancouver newspaper in January.

"At this time there are 16 outstanding items between the parties, including critical issues such as wages and benefits as well as the employment status of the employees the union wants terminated," she wrote.

Do the union and IKEA agree on anything?

"This strike has gone on too long, longer than anyone expected," Löwenborg-Frick stated.

The IKEA workers on the picket line doubtlessly agree. But the Teamsters' Dawson said things have changed at the store in recent years.

"We used to have a good labour-management relationship at Richmond," Dawson said. "Now they're not looking to find solutions, and there has been a big increase in grievances."

So, can a small group of workers beat a giant?

They have the courage of David facing Goliath, but so far seem to lack the critical slingshot needed for an upset victory.

And if they lose, other multinational employers in Canada will likely follow the same approach.