The increasingly-fractious, six month labour dispute at IKEA's big box store in Richmond may be on the verge of a dramatic escalation -- all the way to Europe.

After listening to a wealth of emotional testimony from embittered IKEA employees during a hearing in Vancouver, international trade union representatives are pledging overseas action on behalf of the Richmond store workers, if the prolonged conflict continues.

"We will do everything we can that's in our power," declared Peter Lövkvist, secretary of the Nordic Transport Workers' Federation, which represents 400,000 union members across all five Nordic countries, including IKEA's home base of Sweden. "We're not ruling anything out."

Asked for specifics, Lövkvist mentioned measures such as publicizing the dispute in Scandinavia, demanding a "friendly" meeting with the worldwide company's top brass at its Swedish headquarters, and union members refusing to handle IKEA products. "That could include seafarers, dockworkers, longshoremen, truck drivers, warehouse workers," he said in an interview. "It depends. We could do a lot."

Erin van der Maas, strategic industrial project co-ordinator for the the International Transport Workers' Federation, who also sat in on the hearing, was equally adamant on the readiness of international union organizations to pitch in to help those on the picket line in Richmond. If the company is successful in breaking that union local and imposing concessions, it will be a defeat for unions everywhere, he said.

"Their dispute is now under the gaze of a wider labour movement… I can definitely see this going further," warned van der Maas.

While hoping the threat of international pressure would prompt IKEA to return to the bargaining table, van der Maas noted that Christmas is coming. Boycotts are not out of the question. "We need to raise awareness of this dispute right across Europe," he said. "We've got many members in many countries who buy IKEA, and soon it will be Christmas… Those are things we don't need to spell out."

Although nothing will happen immediately, vows by the two international union leaders definitely up the ante in the local IKEA dispute that began in the lazy, hazy days of mid-May. They also signal growing awareness that a fair settlement for 300 employees at a single location, fighting to resist concession from a worldwide, retail heavyweight like IKEA, may only be possible with powerful, outside allies.

Van der Maas, who is based in London, said labour organizations have understood this for some time, but only now are they starting to translate that into concrete strategy.

"We are realizing we have to be a lot more reactive and work with affiliate unions much faster, so we can respond to a crisis in a quick, meaningful way," he said.

"If you're going to challenge a big company, you need to work across borders, because [picketing] one store in Richmond is not enough to get the message across."

The two international labour leaders are members of a fact-finding panel invited to investigate the strike/lockout by the B.C. Federation of Labour and the Teamsters Union, which represents the IKEA workers.

The four panelists spent Wednesday talking to store managers and employees on the picket line, followed by a two-hour public hearing Thursday afternoon at the Wosk Centre for Dialogue in downtown Vancouver.

Panelists will first compile a report on their findings, then make it public. At that point, further strategy will be mapped out in conjunction with the Teamsters.

Lövkvist, who chaired the panel, said he expects their report to be finished within a month. He noted that Albert Martens, head of corporate human relations for all of IKEA, declined an invitation to explain the company's position. "Once we write the report, we will be contacting IKEA again."

Meanwhile, emotions continue to run high among picketers as the foul weather of November moves in. They accuse managers of distributing information on an anti-union organization called Labour Watch, which counsels workers how to get rid of their unions, and calling employees at home, inviting them back to work. So far, more than 30 union members have crossed the lines and been expelled by the Teamsters.

Picketers who testified Thursday clearly moved panelists with their determination to stick it out and their sense of betrayal over what they said was the loss of social values that had been part of IKEA's approach throughout its astonishing global expansion under legendary founder Ingvar Kamprad. 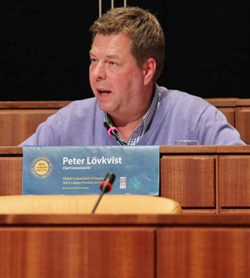 'We will do everything we can that's in our power' to support Richmond Ikea workers, declared Peter Lövkvist, secretary of the Nordic Transport Workers' Federation, which represents 400,000 union members in Nordic countries. Photo via Teamster Local 213 Facebook page.

"He was always willing to find a way. That was his philosophy. But they don't think that way at IKEA anymore," said Marc Caron, a values trainer at the store and an employee for more than 20 years.

"Kamprad also said that only while sleeping, do we not make mistakes. All of a sudden, the company doesn't make any mistakes," Caron said. "They've become the demigods of the furniture world, quick to tell you how wrong you are."

Julia Buczek, a younger, part-time employee, said IKEA had been a big part of her upbringing, as her Polish immigrant parents furnished most of their house with IKEA products.

"But now it seems the company I'd loved and grown up with has become one big corporate machine. Their Swedish values appear to have gone down the drain, at least over here," Buczek said.

Another part-time employee, Kourosh Shahrokhzadeh, told how he experienced more and more difficulty getting sufficient work hours at the store to qualify for benefits. The atmosphere was far different from his time working at an IKEA store in Sweden.

One of his children is autistic and his wife has breast cancer, he said. "I'm just speaking from my heart. My co-workers were so good to me. They gave me a sense of belonging. But now I only see the black end of the tunnel. The IKEA culture here is certainly not what I was expecting when I was hired."

Ikea 'committed to being a great employer': spokesperson

IKEA's Richmond store is one of only two in Canada with a unionized workforce.

On May 13, after workers voted resoundingly to reject a contract offer laden with concessions and a two-tiered wage package, they were locked out for an hour. Employees were then invited back by the company under terms of a new agreement that imposed the two-tier wage system (lower rates for new staff), fewer benefits, tougher management rules and a new pay grid that required much longer service to attain the top wage rate. Workers stayed on the picket line, where they remain today.

In subsequent bargaining, the company abandoned its demand for two-tier wage rates, but called instead for advancement up the wage grid to be based on the level of sales at the store. According to the union, such a condition is unprecedented in the industry.

Madeleine Löwenborg-Frick, public relations manager for IKEA Canada, said she was travelling and could not provide comment on the latest development in the dispute until late Friday or Monday.*

In an interview with the CBC earlier Thursday, however, she said the company had not been invited to participate in the public hearing, but did meet with two panelists at the store in Richmond.

"So we did have an opportunity to reiterate to them that we are committed to providing wages that exceed industry standards," Löwenborg-Frick told the CBC. "We are not proposing any wage reductions. We are committed to being a great employer and providing long-term, sustainable jobs."

She said the company is willing to return to negotiations if the Teamsters step forward "with a reasonable offer."

The dispute has caused IKEA to close its restaurant and children's play area, and shut down completely one day a week, hardly a grave financial blow for a chain that reported about $4 billion in profit last year.

Peter Lövkvist said he was quite startled to hear about IKEA's attitudes towards its Richmond employees, given the company's generally fair treatment of workers in much of Europe.

"IKEA has a good reputation in Sweden. It's a good employer," he said. "But it seems the farther away from Sweden they get, the worse IKEA gets in labour relations."