[Editor's note: This submitted piece is written by Heiltsuk community organizer Jess Housty in response to people (both indigenous and non) asking her what Idle No More is all about and how people can get involved.]

As everyone should know though many don't, there are massive issues facing First Nations across Canada, with perpetual crises in everything from housing to education to health care. But the most crippling issue underpinning those crises is, in my opinion, the sense of helplessness and dependency that has long dominated our communities. We have been held back by a feeling of defeat. No longer. Perhaps the greatest value of Idle No More amongst First Nations is the way it's lighting a fire in people who used to think change was impossible, and the sense of hope, agency and urgency it's giving them as a new Canada struggles to emerge. 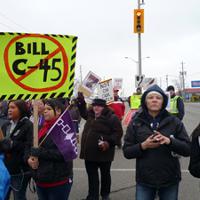 Media Elders Fail Us by Sneering at Idle No More

For First Nations citizens, this movement encourages all of us to become the strongest leaders we can be in every way we can. Change won't happen unless we want it, demand it, and work for it, and it's going to take all of us in each community committing ourselves. This isn't to say that everybody has to sit on their band's elected council or fill some other formal leadership role -- it's as simple as respecting traditions, self and family; practicing our culture; asserting our rights and title; implementing our traditional law; getting educated about the issues; and accepting a sense of personal responsibility and leadership in our lives and our communities. My elders have always taught me that we're all in the same canoe; if we pull our paddles together, there's nothing we can't accomplish.

At the same time, non-indigenous Canada is complicit in this crisis, and has just as important a role to play in its resolution. To begin with, there is widespread ignorance amongst Canadians about our country's colonial history, about how First Nations live now, and about the level of support we receive. There are lots of stereotypes to combat: "They don't pay taxes"; "they get free houses"; "they get free tuition"; "all band councils are corrupt"; "they're all drunk and lazy"; etc. Take me as a counter-example: I have a university degree, and I paid for it by earning competitive scholarships. I have a full time job, but current laws and bank policies mean I will probably never be able to purchase a home on reserve. I work 60 hours in an average week, and I file my income taxes just like everyone else. I'm not necessarily representative of the whole, but more people are choosing this path than ever before, and I believe we can create the conditions for this to be a norm rather than exception.

Furthermore, while big legislative changes like Bills C-38 and 45 affect everyone in Canada, not everyone in Canada has the same legal basis for fighting back. A majority government can and is passing laws that most Canadians, having cast their ballots long ago, are now powerless to prevent; First Nations, on the other hand, have a unique leverage here. We are issuing legal challenges to the omnibus bills on the basis of infringement on treaty rights, land title, and constitutional questions. I believe it's in the best interests of people who care about the environment to support this. Environmental groups started waking up to this strategy in the fight against Northern Gateway, but it needs to happen on a bigger scale. We all need to realize that First Nations and non-indigenous Canadians have common goals and interests that go well beyond any one pipeline or province; they extend across the country. We need to support each other in walking the paths that will achieve our common goals.

So the question is -- how can you, an average non-indigenous, non-activist, yet conscientious citizen of Canada, support us? Here are a few ideas:

Go to the rallies. You might think that doesn't accomplish anything, but it is a visible show of solidarity, and that matters. Participating in (and bearing witness to) ceremony in a respectful way is an important gesture. Make signs, participate in the days of action, and share photos through your social media networks. Be brave; join a round dance. We are gathering our strength in a visible way, and it all keeps up the momentum.

Get educated. People know less than they think they do, even the smart ones. Canada's indigenous question is a big, abstract issue, and the mainstream media is clouding it horribly, with some notable exceptions. There are good resources at idlenomore.ca and elsewhere, if you only look for them.

Confront racism. This is deeply tied to getting educated and challenging stereotypes. Many of my non-indigenous friends told me they spent their holidays listening to their relatives undermine INM over Christmas dinner and didn't speak up because they didn't know what to say. I told them all the same thing: keeping quiet is perpetuating the problem.

Participate in democracy. Write your MP and MLA. Vote. We elect these people to office. They work for us and we need to hold them accountable, starting with your MLA and MP and working right up to the prime minister. They can only represent us if we give them a clear mandate and hold them accountable.

Write letters to the editor. Idle No More has exposed astonishing hidden recesses of bigotry in otherwise respectable journalists, and not enough people are calling them on it. Don't just add a snarky post to the online comments section. Don't assume that INM campaigners are on it; most people deeply involved in the movement are so busy putting out fires elsewhere that much is being left undone and unsaid. Champion truth and fairness at every level you can as an individual.

Remember that this isn't about blame. There will always be individuals who lash out. But the spirit of this movement as a whole is about standing together and making change for a better future for all of Canada. Allies need to work at remembering that this isn't about colonial guilt -- this sort of defensive instinct is one of the biggest barriers to new allies getting involved.

Be a leader in your own sphere of influence, whatever that looks like. Model the respect and commitment you think other allies should show. Don't get hung up on big, abstract concepts like "decolonization" and "self-determination." Start by committing to them at your own level -- for myself, I'm committed to decolonizing my relationships, and practicing personal self-determination in a way that strengthens me as an individual. You can support that process in others whatever your background is.

Not all of these actions are concrete or measurable, but all of them truly do matter. If, after reading this, you're still uncertain how to show support, you can always reach out and ask. People within INM who are committed to its core ideals show 100 per cent support for non-indigenous allies getting involved in a respectful and meaningful way -- indeed, that involvement is critical to the success of the movement.