[Editor's note: Steve Burgess is an accredited spin doctor with a Ph.D in Centrifugal Rhetoric from the University of SASE, situated on the lovely campus of PO Box 7650, Cayman Islands. In this space he dispenses PR advice to politicians, the troubled and well-heeled, the wealthy and gullible.] 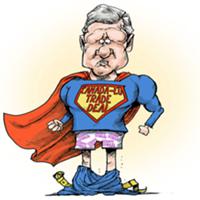 Just one more year until the next mayoral race in Toronto. And I'm thinking: So far, so good. I have confessed to crack smoking, my personal assistant has been charged with extortion, and I have shown up in surveillance videos pissing on the sidewalk. My poll numbers are pretty steady. As I see it I can do just about anything at this point. Am I right?

Looks that way, doesn't it? Your devoted fans will follow you anywhere. Too bad the tag "Deadheads" is spoken for -- it fits. It's interesting to speculate about what you'd have to do to alienate your core. What's to stop you from going full Magneto? Wreak havoc! You can always blame it on a drunken stupor later. As long as you don't try to increase food bank funding or build any bike lanes, you're golden.

Kudos to you, mayor. You have rewritten the rules. At the Vatican, white smoke signals a new regime. In Toronto, a big puff of crack smoke announces your re-election campaign. After your admission that the maggots of the press had indeed been correct about your recreational habits, the announcement that you would make another statement today drew a writhing mass of them to City Hall. Economists will later note a sharp drop in Canadian GDP on Nov. 5 as the nation awaited announcement of your plans. The Harper government missed a glorious opportunity that afternoon -- they could have stuffed Senator Mike Duffy into the trunk of a Lincoln and driven him away with not a single camera around to record the event.

If media attention is currency, Mr. Mayor, you were the equivalent of six Koch brothers today. Somewhere in the city Toronto Argonauts general manager Jim Barker must have been staring at the TV in envy, contemplating whether he should start smoking crack. He can only dream of such coverage. But then, when it comes to CFL football the West is best, whereas in the Canadian Mayoral League it's East Division season ticket holders who see all the action.

It was rumoured you'd announce you were taking a leave. That turned out to be a misunderstanding -- perhaps you told somebody you were taking Aleve. I'm sure those hangovers of yours are wicked. But when you finally stepped before the cameras all you did was apologize, promise not to smoke any more crack (no promises about future pissing on the sidewalk), and close by saying "God bless the city of Toronto."

In weeks to come Hogtown is bound to see the influence of your bold approach. One will now be able to drag race through a school zone or drive over the neighbour's dog, emerging from the vehicle just long enough to declare, "God bless the city of Toronto," and drive on.

Torontonians claim to be embarrassed by all this. Well, some Torontonians. Others are quite honest about popping big bowls of popcorn every time another "Breaking News" banner appears. (One of the more pathetic sidelines of this whole business has been the secret pride we Canadians have taken in becoming the lead joke on The Daily Show with Jon Stewart.)

But the genuinely embarrassing part has been electoral. We don't know yet what will happen next year but the astounding truth, Mayor Ford, is that you do indeed seem to have a legitimate shot at re-election. Once upon a time Canadians could act properly appalled at the American success of the Tea Party, and before that of George Dubya. Hard to do that now. A politician like you holds up a mirror to the electorate. That's why not everyone is laughing.

One of the great political lessons of this affair is that politicians can lower the bar not just for future candidates, but for themselves. By engaging in increasingly outrageous behaviour, you blot out the memory of your own past outrages. You allegedly groped a woman at a party, flipped the bird to a citizen in traffic, commanded a TTC bus be emptied to ferry your high school football squad, were charged with conflict of interest (though those were later dropped), denied charges brought against you in Florida, spewed obscenities to fans at a Leafs game and later denied you were ever there, called 911 on a comedian, and a reporter, etc.

But people can't focus on all that. The sheer volume works in your favour. All you have to do is keep topping yourself. Now it's all about the crack thing. The fact that reporters laughed when you said "God bless the city of Toronto" is enough for you to launch your counter-attack against those cynical big city elitists. And away we go.

I've got to hand it to you Rob -- you've changed my thinking. I used to favour an elected Senate. Now I figure if we leave it up to the voters, we'll never get rid of those clowns.