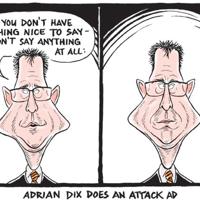 Of course this is because the Liberals won the May 14 election. If they have their way it will be disastrous for all we hold so dear -- our fish, our rivers, our environment on land and in the oceans.

There will be a continuation of the fiscal management of 2001-2013 which saw the personal share of debt rise from $5,000 per person to $40,000. It saw the giveaway of BC Rail and the bankruptcy of BC Hydro. It's a sad tale but more is to come.

We will build "Site C" for about $10 billion (the official version is "merely" $8 billion) in order to subsidize the gas drilling companies with the electricity they need as they threaten the environment with the "fracking" process.

Let me pause here to describe "fracking." It's used in large shale deposits which are "layered" and have trapped gas and oil between those layers. The technique is to drill vertically to where the gas is trapped, then drive horizontally by use of huge amounts of chemically laden water to force the gas to the surface. This relatively new technique has made the oil and gas so different that except to say that it's different, those who are supposed to know about these things are nonplussed.

Yes, citizens who fear for our environmental health are discouraged by the Liberal victory.

My anger is directed to the NDP. Let me state, vulgarly, that I don't give a rat's ass about the NDP as a party. I ran against them twice (successfully) and given the same circumstances I'd do it again.

It's here I begin to splutter as I look back at their campaign, or lack of it. And, yes I'm entitled to say "I told you so" as I harped on the theme that politics is a blood sport as Adrian Dix smiled benignly and announced a policy a day -- a fart a day I called it -- as if each issue he was addressing was an election winner.

Ian Waddell, a former NDP MP and mentor to Dix, laid it out in a column here on The Tyee, which Vaughn Palmer picked up on in the Sun. The NDP simply ignored the Liberals' record, which permitted them to make out that they were the fiscally responsible alternative (grossly untrue) while the NDP couldn't articulate any viable policy (demonstrably and lamentably true).

I apologize for repeating Lord Randolph Churchill's aphorism: "It is the duty of the opposition to oppose." Under our system, and most others I dare say, this is the only way an issue can be judged. Had this principle, if even known to the NDP, applied in addition to the fantastic fiscal failure of the Campbell/Clark government, we would have heard about corruption and even more importantly the catastrophic policy, re: the environment and the many forms this disaster took.

If the NDP had been doing its job we would have learned how and why BC Hydro has been driven towards bankruptcy by the Campbell 2003 edict that all new power (except "Site C") would be privately generated. We'd have heard how Hydro was forced to buy this private power on a "take or pay" basis, meaning they bought it whether or not it needed it at two to three times its market value and at about 10 times what it cost Hydro to generate power itself. The private power can only be produced during "run off" situations and this year we've seen the ridiculous spectacle of Hydro spilling water over its dams because they had to buy private power.

We would have learned how Hydro is in hock to private producers for around $50 billion for power it doesn't need.

Not only did Dix not beat up the government, it wasn't apparently an issue that private companies were utterly destroying the rivers they dammed but were not held accountable for hundreds of breaches of their license.

Dix was excoriated for his late decision to oppose the Kinder Morgan pipeline proposal. It was politically stupid, which he should have seen in the Chilliwack by-election when he took no position at all while disapproving the Northern Gateway (Enbridge) proposal when the issues were all but identical.

Now, folks, I take a risk. I'm going to criticize NDP energy critic John Horgan who has I'm told, a wicked temper. Well, Mr. Horgan, you blew it and blew it badly when you supported Liquefied Natural Gas (LNG) refineries in Prince Rupert with accompanying pipelines and fracking operations -- apparently because the party couldn't be seen as being against everything.

This was a blunder of immense proportions for Horgan who didn't know his brief. Here we had Premier Clark suddenly declaring that natural gas for these purposes was no longer environmentally harmful, making this exception to her government's own policy.

Flowing neatly from this approval for LNG projects by Mr. Horgan is the acceptance of fracking, using enormous quantities of water for hydroelectric purposes, dousing it in chemicals, and potentially sending it back into ground water. Indeed it makes it impossible for the NDP logically to oppose "Site C."

The worst of all is that the NDP have lost all claim to lead the opposition. It wasn't all Dix's fault. The policy had many failings by people who will now advise the party on how to make things right, with several of them running for what will soon be a vacant leadership.

No, it wasn't the Liberal win that was extraordinary, but the utter collapse by the NDP who not only failed their own party but, much worse, all British Columbians look with horror at what is happening to their province.

Postscript: the Liberals couldn't have won without the help of the mainstream media -- and I point out again that since 2001, Mike Smyth and Vaughn Palmer have written timidly at best about the grave risks posed by the Campbell/Clark energy policy or proposed pipelines and tankers.

As A.J. Leibling said "Freedom of the press is guaranteed only to those who own one."

Maybe we should be directing out attention to the owners.