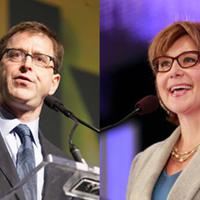 If you believe Premier Christy Clark, B.C.'s budget is not only balanced -- it's actually been verified by international credit rating agencies.

And thanks to Clark's B.C. Jobs Plan, this province apparently leads the country in job creation.

But the facts simply disagree with the premier.

During this election Clark has been trying to sell more Whoppers than Burger King.

Clark said two noted agencies agreed with her that the B.C. budget has no deficit in a radio interview on CKNW AM 980 April 22.

"Go ask Moody's. Moody's is a debt rating agency that works all over the world and looks at everybody's budgets and decides whether or not those budgets are balanced," Clark told host Bill Good.

"They said it was balanced. They are the world's experts. Dominion Bond Rating agency said the budget was balanced," Clark added.

Hold the cheese on that Whopper because no, they didn't, not Dominion, not Moody's.

In fact, Dominion says the B.C. budget is not balanced at all but will likely have a deficit of $1.7 billion, based on their analysis.

"In response to softening economic conditions, the province announced additional tax measures and continued spending restraint to deliver a small budgeted surplus of $197 million in 2013-14. This translates into a DBRS-adjusted deficit of $1.7 billion, or less than 1.0 per cent of GDP," they wrote.

"The negative outlook reflects the risks to the province's ability to reverse the recent accumulation in debt given a softened economic outlook, weaker commodity prices and continued expense pressures," Moody's states.

Nor does Moody's share Clark's optimism that she can balance the budget by selling off nearly $800 million in provincial property.

"Disposing of surplus properties, often with associated operating costs, would appear to make sense, however, these one-time sales cannot be relied on to resolve structural budget imbalances," Moody's says.

Yet Clark has the nerve to claim in a Vancouver Sun opinion piece that:

"Controlling spending, which we accomplished by balancing the 2013 budget -- which was recently confirmed by Moody's."

(Amazingly, Clark's Vancouver Sun article had not been recommended by anyone on Facebook and re-Tweeted by just one person as of April 28.)

"In the first year of the jobs plan, we led the country in jobs creation," Clark said on April 5.

The reality is that Statistics Canada figures show B.C. is ninth in job creation since Clark launched her plan, losing 34,800 private sector jobs since then.

It appears clear that the things you say, premier, are simply unbelievable.