The Brazeau affair -- sad, repugnant and bizarre all at the same time -- shines a light on two aspects of Canadian politics that desperately need some exposure. 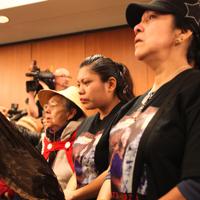 One is what it reveals about the state of "official" aboriginal politics and its relationship to the Canadian state.

The other, the almost exclusive focus of the media, is the grotesque hypocrisy of Prime Minister Stephen Harper regarding the Senate. The question most asked in post-Brazeau flame-out is how was it possible that Harper, the strategic genius and control freak (with a $10-million staff at his command), could have chosen this guy as a senator?

Did he set out to humiliate aboriginal people by picking one of the worst possible candidates from amongst their spokespeople?

Maybe Brazeau was actually the best loyal Conservative aboriginal person Harper and his war room could find. You do have to wonder what kind of aboriginal leader would be loyal to a man and government so utterly contemptuous of First Nations people and their rights.

Or was it just simple racism -- setting lower standards for aboriginal representatives than for others?

Or was Harper's motivation to select Brazeau simply the PM's well established disdain for government and all of its institutions? Perhaps he just didn't care enough to put any energy into vetting his choices. After all, two other appointees are just as sleazy as Brazeau in their unseemly greed regarding fraudulent expense claims. For the nouveau-elite pair, Pam Wallin and Mike Duffy, $130,000 a year for sycophantic support for Harper just wasn't enough. And what does it say about journalism that these two former media titans have such questionable ethics? That it never occurred to two former journalists that they might get caught is also bizarre. But I digress.

What Harper knew all along

It is just not possible that Harper didn't know of all the skeletons in Brazeau's closet. Even though Harper doesn't read Canadian newspapers, his loyal soldiers do, and there was a lot to read. Here's what Harper knew when he appointed Brazeau:

The Porsche-driving former model was behind in his child support payments (even while making a six-figure salary with the Congress of Aboriginal Peoples [CAP]).

He was facing a charge of sexual harassment.

His organization was being investigated by Health Canada for financial irregularities tied to Brazeau's three-year tenure as CAP's executive director.

And he was a political pariah amongst other aboriginal groups who complained bitterly to the government about CAP's (budget: $5 million), legitimacy and membership. Brazeau helpfully reinforced that criticism later by describing his former organization as a "mickey-mouse club."

His behaviour since being appointed suggests that the one thing a politician needs more than anything else is completely missing from Senator Brazeau: good judgment. But whether we look at the before or the after of his appointment, one thing seems clear -- Harper's alleged commitment to Senate reform remains illusory. After years of attacking the institution as a haven for cronies, he has turned his distaste for cronyism into a principle of governance (not unlike his commitment to rid Ottawa of its opaqueness).

Harper could have made better choices for senators, but he couldn't help himself. So great is his contempt for democratic governance that he felt obliged to fill the senate with the ethically challenged and other losers. While others are decrying the descent into bathos, the Senate farce could be seen as just another arrow in Harper's voter-suppression quiver. The more public disdain for government, in Harper's calculations, the better.

The other revelation we can extract from this gong show is what it reveals of the relationship between aboriginal groups and the government. Brazeau is just the worst example in recent memory of the abuse of the privileges available to those running formal aboriginal organizations. One of the reasons that other groups complained loudly about Brazeau's CAP is that the continued legitimacy and funding of these national (and provincial) groups depends on their good behaviour. Brazeau's group (and his defamation lawsuit against them) threatens the delicate status quo.

The financial privileges and social status these organizations confer on their directors means they will fiercely defend their official status. Once they receive that status it is almost never rescinded. The groups long ago became institutionalized and bureaucratic but so long as they exist it is very difficult for other more democratic and grassroots groups to get established. This is one of the barriers the Idle No More movement faces: these groups guard their formal status carefully and are not amused by anything that challenges their legitimacy. But that, of course, is just what INM does. If these organizations (including most band councils) were doing their job, there would have been no national outpouring of First Nations anger.

That is one of the things that the movement will have to come to terms with early on. What will be its relationship with these compromised organizations? So far it seems there is no effort to engage these groups -- and that is a good thing. They have been around for over 40 years and will not -- indeed cannot -- accommodate the kinds of demands INM makes nor can they become the organizations that reflect those demands. They have been defined by their financial relationships with the state and they are now more service organizations than political bodies capable of mobilizing their members for social justice.

But that doesn't mean that INM can't establish itself as an organized movement. Its legitimacy will come from its genuine connection with aboriginal communities and its growing political capacity to demand that governments listen. Before the advent of government funding aboriginal organizations had real power -- indeed that is why governments funded them in the first place. The lesson of 40 years of aboriginal politics is stark: you can take government funding but you have to hand over your power to get it.

The first Metis organization of the twentieth century, L'Association des Metis d'Alberta, (founded in 1932) fought for over 10 years for a land base -- and succeeded. This was despite the fact that its membership was made up of some of the most destitute people in the country. There was no funding except from the pockets of the leadership. Its vice-president, Malcolm Norris, once pawned his watch to buy gas for a trip to a meeting in a remote community. And there you have the polar opposites of aboriginal leadership -- unless you can imagine Patrick Brazeau pawning his Porsche.