Just a week before the third anniversary of the catastrophic Port-au-Prince earthquake, International Cooperation Minister Julian Fantino announced that Canada is freezing aid to Haiti. 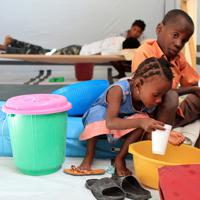 While CIDA reportedly denied that a freeze was in place, Haitian and UN officials (including Michaëlle Jean) have treated it as a fact. Whatever Fantino intended, he's caused confusion and alarm. The situation in Haiti has been terrible for decades, and the minister's remarks have only made it worse.

How terrible? In mid-December, the British medical journal The Lancet published a whole issue dedicated to one subject: the Global Burden of Disease Study 2010. In discussing the healthy life expectancy for 187 countries, it made a passing reference to Haiti: A baby boy born in 1990 could expect, on average, 44.9 years of healthy life, and an overall life expectancy of 53.3 years.

That's pretty grim; a Canadian male born that year can expect almost 64 years of good health and a total life expectancy of 74. But it's worse now: Twenty years later, a Haitian male born in 2010 has a total life expectancy 12 years shorter: 32.5 years, with only 27.9 years of reasonable health. This, the authors say, is due to the effect of the earthquake of Jan. 12, 2010, which killed hundreds of thousands of Haitians.

That appalling statistic has, I suspect, more causes than a simple earthquake. Jan. 12, 2010 was largely a human-made disaster, and among the collaborators were the governments of Canada and the United States -- indeed, through the UN, the whole world has helped to wreck the country.

A nation almost killed by kindness

Two recent books by Americans with long residence in the country portray the disaster from very different points of view. But they both show a nation very nearly killed by our kindness.

The background to the quake comes from Travesty in Haiti, by Timothy T. Schwarz. Schwarz did the field work for his anthropology Ph.D. by living in a northern Haitian fishing village in the 1990s. He then conducted scholarly research for various non-governmental organizations (NGOs) in the country. His book is self-published, and shows it: the text is riddled with typos and copy-editing errors.

But Schwarz is a vivid storyteller and knows his subject. He dealt with poor villagers and the ruling elite, as well as the NGOs, and he soon learned that corruption runs from top to bottom in Haiti.

So American NGOs promoted "food aid" to Haiti that was really a subsidy to already-subsidized American farmers. Cheap American food made it impossible for Haitian farmers to sell their own produce.

Driven off the land, they migrated to Port-au-Prince's slums in search of work. The lucky ones got jobs in foreign-owned factories that depended on paying their workers almost nothing. Schwartz suspects this was the plan behind the food aid: deprive the peasants of self-sufficiency on the land, and create a cheap, disposable workforce.

Meanwhile, hundreds of NGOs had begun to move into the country in the 1970s and '80s. They took over functions that the government had no money for. Foreign donors kept their money out of politicians' hands, fearing corruption, so the money went to pay American companies and the salaries of NGO personnel.

Schwartz fictionalizes some aspects of his book, merging two northern Haitian towns into one and renaming many people. But it rings true, especially the reliance of NGOs on foreign donors who end up keeping the NGOs alive while helping the Haitians very little.

Schwartz visited orphanages where the kids enjoying a donor-funded education were actually the children of affluent local parents who were glad to exploit the North American suckers. Similarly, he met Haitian doctors who received a free medical education in exchange for service in public hospitals. But they did as little as possible in such hospitals, transferring publicly owned equipment to their private clinics where the real money was. (Really successful doctors migrated to Miami.)

As a longtime Haiti-watcher, I've been maddened by the cholera statistics produced by the Ministry of Public Health and Population (MSPP). They're always late, incomplete, and inconsistent; I have to assume that reported cases and deaths are just a fraction of the real numbers. Schwartz confirmed my suspicions with an anecdote about a local MSPP office where two bored employees kill time without functional computers.

Schwartz ends his book with an account of how the coastal village he spent years studying finally achieved prosperity. After years of programs that did nothing for them, the villagers seized a chance one night to hijack part of a cocaine shipment that had been landed on their beach. Scores of people sold kilos of coke for real money, and then bought big houses and new cars.

'Nobody knows how many died'

Travesty in Haiti provides a useful background to the earthquake itself. When it hit at 4:53 p.m. on Jan. 12, 2010, it was a relatively minor 7.0 magnitude earthquake; Chile rode out a comparable one a few weeks later with little loss.

But it hit Port-au-Prince, a city jammed with people from impoverished rural regions in search of a living. Like the rest of Haiti, Port-au-Prince had no building code, and no agency to enforce one. So most of its buildings were constructed of inferior concrete, and they crumbled in seconds.

On Jan. 12, AP correspondent Jonathan Katz was about to leave Haiti after two years. He survived through sheer luck, camped out in the courtyard of an intact hotel, and stayed to record the impact of the disaster. His new book The Big Truck That Went By is the single most comprehensive and understandable account of what happened, and why.

"Nobody knows how many people died in the earthquake," Katz writes. "The foreign powers deferred to the Haitian government, but it had no way to count. It didn't even know how many people had lived in the quake zone. ... For no apparent reason, the UN stopped matching the Haitian government's count after it reached 230,000." The government finally settled on 316,000 deaths, but the true total is probably a fraction of that number.

Whatever the number, the damage was still catastrophic. While thousands abandoned the city for relatives' homes in the countryside, hordes of rescue workers streamed into the barely functional Port-au-Prince airport, adding to the confusion. Many worked only to rescue foreigners, including six teams at the Hotel Montana.

The rescuers obsessed about security; they seemed to assume that violence and looting would be the natural consequence of a disaster, especially one involving lots of black people.

"In fact," Katz writes, "while some Haitians committed crimes after the quake, far more appeared to be doing everything possible to restore a sense of security."

A classic of disaster capitalism

Katz doesn't use the term, but his book describes a classic application of Naomi Klein's disaster capitalism. The outsiders who already ran Haiti, led by Special Envoy Bill Clinton, used the quake to entrench the depopulation of Port-au-Prince by pushing the establishment of more Korean-owned garment factories in northern Haiti -- and to keep their minimum daily rate at $1.79 instead of raising it to $5.

Nor did the promised $16 billion in aid ever materialize. Most of it was never spent, or spent in the donor countries. "Venezuela and the United States," Katz writes, each [delivered] less than a fifth of what it had promised."

Katz's chapter on the cholera outbreak of October 2010 is especially good. He points out that North American fear of post-disaster epidemics is as common as fear of black violence. But cholera actually sprang from MINUSTAH, the UN's peacekeepers, installed in Haiti precisely to prevent black violence after the ouster of President Jean-Bertrand Aristide in 2004.

Katz covered cholera from the outset, and actually identified the source: the leaky sewage system of the Nepali peacekeepers' camp in Meille, on the Artibonite River. His description of the UN's efforts to cover up its responsibility is devastating. But over two years after the outbreak began, with 633,906 cases and 7,885 deaths as of Christmas Eve 2012, the UN continues to deny its culpability.

Instead, for a year it has recycled promises of a 10-year $2.2 billion cholera eradication project, almost 90 per cent unfunded. Compensation for the families of cholera victims is not included.

So Julian Fantino's freeze on aid to Haiti is unsurprising. Almost everywhere, "aid to Haiti" is politically motivated smoke and mirrors, a way to make outsiders feel good about Poor Haiti and its sorrows. The real aid never arrives, except in the bank accounts of NGOS and foreign companies that pretend to be helping.

In a series of tweets after the announcement, Jonathan Katz commented: "Canada disbursed $657 million from the quake to Sept. 2012 'for Haiti,' but only about 2% went to the Haitian government. … If Canada's govt didn't bother to tell Haiti's govt it was freezing aid -- and the Haitians didn't even notice -- that's all you need to know."

The Haitians themselves understand this; scamming the outsiders is just another industry like fishing, selling cocaine, or making cheap Korean garments at $1.79 a day.

In his interview, Julian Fantino patronizingly observed, "Are we going to take care of their problems forever? They also have to take charge of themselves." The Haitians, realizing the world has been opposed to free black people ever since Haiti's independence in 1804, have paid us no more respect than we deserve. When we couldn't enslave them any more, we bullied them, or scammed them with bogus promises of aid. Of course they've scammed us back, and our governments have been their accomplices.

If we ever treated Haiti and the Haitians in good faith, as equals facing horrible problems we helped inflict on them, we might even some day deserve their respect. But given what these two books tell us, I doubt that day will come in Julian Fantino's lifetime, or that of an average Haitian.