The carbon tax applies to almost all fossil fuel combustion in B.C. and will presumably apply to LNG development in the same way.

However, the tax gives a free pass to emissions from non-combustion sources such as when carbon dioxide is stripped from raw natural gas and vented to the atmosphere.

If the province closed this loophole, the carbon tax would apply to upwards of 87 per cent of the emissions from extracting and processing natural gas -- up from the current 63 per cent. 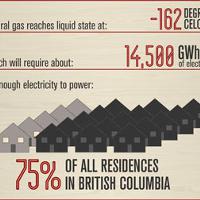 The greenhouse gas pollution produced by the wells, pipelines, processing plants and liquefaction facilities needed to fulfil British Columbia's liquefied natural gas (LNG) aspirations will make it impossible for the province to meet its climate change commitments. Yet, the province says it still intends to "maintain leadership on climate change and clean energy."

Having trouble squaring that circle? You wouldn't be alone.

Climate leadership means meeting commitments to reduce greenhouse gas emissions. That will be a problem if the province goes ahead with LNG; even in a best-case scenario, the targets will become unachievable.

Climate leadership also means contributing to global solutions. The LNG plans fall short here too because it feeds a natural gas-hungry world that will likely be 3.5 degrees warmer by century's end. Natural gas might be cleaner than coal (a popular refrain of LNG proponents), but burning it still moves the planet closer to dangerous and irreversible climate change, that is, until there are much stronger climate policies around the world.

In an ideal world, B.C.'s political leaders would decide that exporting LNG is not in the province or planet's interests. Unfortunately, this is not an ideal world and, as is so often the case with climate change, we try to make the best of a bad situation. There are ways to minimize the impacts from LNG development but, for that to happen, the current conversation about "climate leadership" needs a serious reality check.

1. Limit the emissions in BC as much as possible

How many plants actually get built is anybody's guess. Let's assume the province exports about half the LNG it hopes to -- a volume of LNG (20 million tonnes) that is equivalent to the initial phases of the Petronas (8 million tonnes) and Shell (12 million tonnes) proposals. Based on current policies in B.C., the emissions from extracting, processing, transporting and liquefying the gas would produce 17 million tonnes of emissions per year -- enough to consume 44 per cent of the province's total targeted emissions for 2020.

None of those emissions numbers are set in stone; decisions about the number and size of LNG plants, and the amount of renewable energy used will influence the final numbers. We have one shot to minimize those emissions, because once the infrastructure is up and running, the resulting emissions and other impacts are locked in.

One option that has seen some public discussion is using renewable energy to power the liquefaction plants. First Nation communities have been debating this issue, while Minister Coleman recently said it would be up to the proponents to decide -- which would very likely lead to a heavy reliance on gas.

Of course the LNG plants are just one source, with the emissions from pipelines, processing plants and wells accounting for five times more pollution. There are options here too. Renewable energy could be used instead of natural gas in some instances, methane leaks from wells and pipelines could be reduced, and the greenhouse gasses vented from large processing plants could be captured.

If we did all of this, the increase in emissions in B.C. would still make the province's climate targets unachievable, but the jump in emissions would be cut nearly in half.

2. Invest the value of the carbon in climate solutions

B.C.'s carbon tax has an important double purpose in this debate: it provides companies with the incentive to invest in improvements like renewable energy, and it generates revenue that could be invested in climate solutions.

For argument sake, let's say proponents were put on notice that the carbon tax will increase to $70 per tonne by 2020 and that it will apply to all of the emissions from the LNG plants, pipelines, processing plants and wells that can be accurately measured (see sidebar). This is easily plausible by the end of the decade. For example, Norway's carbon tax will be $71 per tonne for offshore oil and gas producers in 2013 and Australia's carbon tax already applies a similar level of coverage.

Under this scenario, annual carbon tax revenue from the LNG development would be between $608 million and $1.1 billion depending on how much was done to limit emissions increases. Added up over 20 years of operation, that's between $3.3 and $9.7 billion more than if the carbon tax stays at the status quo $30 per tonne -- a hefty chunk of change that could be invested in climate solutions.

Put in the context of the overall economics of LNG, a stronger carbon tax is unlikely to break the bank for proponents. Even at $70 per tonne applied to all measureable emissions in B.C., the overall costs to produce LNG would only increase by $0.23, to $0.68 per gigajoule. If adding a few percent to the cost of B.C. LNG exports (natural gas is currently selling for close to $15 per gigajoule in Asia) makes these projects infeasible, then the business case is already so rickety that we shouldn't be taking the risk.

The astute critic will rightly point out that burning the gas in Asia accounts for most of the emissions. While those emissions are more or less fixed based on the amount of gas burned, the consequences will be influenced by climate policy. With strong climate policy, some natural gas can legitimately claim to be part of a climate-friendly energy mix. Without strong climate policy, natural gas simply moves the planet closer to dangerous and irreversible climate change.

At $3.36 per gigajoule, this would be a significant jump in the cost of natural gas -- about a fifth of the price in Asia. Recognizing that the price of B.C. LNG likely could not increase by 20 per cent and still be competitive, the province could work with other LNG exporters to adopt similar approaches. Alternatively, the province could transfer tax revenue to the jurisdiction buying LNG to help them invest in climate change solutions.

Is the bar still too low?

Limiting the increase in greenhouse gas emissions, maximizing the value from the remaining emissions, and taking responsibility for the exported emissions would lessen the climate blow of B.C.'s LNG aspirations. While each may seem like a tall order, it is important to remember that combined they may still fall far short of what is needed to help prevent dangerous climate change.

Ultimately, a willingness to miss climate change targets in order to expand fossil fuel exports is a recipe for disaster.

The analysis cited in this op-ed is available here.