[Editor's note: Two weeks ago, Rafe Mair's Halloween season column declared "monstrous" the amount of power Canada's political system gives the prime minister. It was a hit, gaining nearly a thousand Facebook recommends and thousands more views. This week Mair lays out his solution for restoring more democracy to Parliament and the citizenry.]

As long as humans are running things there will always be problems. As we have seen, democratic ideas and structures are no guarantee of government of, for and by the people. It's instructive to remember that Adolf Hitler became Chancellor of Germany with the largest number of members in the Reichstag and became dictator after an Enabling Act was passed with Catholic delegates voting for it on instructions of the Pope. 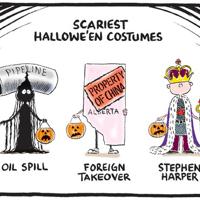 No matter what system is adopted, men will grasp for power and once getting it, will try to extend and prolong it. This does not mean that we can't do a hell of a lot better.

We mustn't let perfection be the enemy of improvement.

We can make one change within our present structure which in itself will take us a long way down the right path. Are you ready for this?

Make every major vote in parliament by secret ballot.

Whenever I have suggested this over the past 40 years I'm greeted with screams of terror. "I want to know how my MP votes" is the cry.

But knowing how your MP will vote means he will continue to vote as he is instructed by the prime minister.

Let's look at the Commons vote in 2012 on C38, the budget vote which, quite contrary to the spirit of parliamentary democracy, was an omnibus bill containing many issues outside the budget including elimination of protection of fish habitat. Every single Conservative voted for this. But surely not all Conservative MPs, especially those from B.C., were for removing protection for salmon habitat.

If the budget bill was by way of secret ballot, the likelihood is that the PM wouldn't have dared bundle in irrelevant bills which he didn't want publicly debated on their merits.

The case for secret ballots in Parliament

Government MPs, knowing that if the government loses a budget bill it must resign, don't dissent.

But what if every bill, other than a confidence one, were by secret ballot with the proviso that if it fails, the government is not compelled to resign.

Surely this would mean that all MPs of every party would be consulted by the government and would be part of the drafting process. How could that be bad?

Suppose we did subject the budget bill to the same process, providing that the government needn't resign if it loses the vote but must try again.

How can that be bad?

Right now, the Finance minister is able to walk into the House and table a budget saying, "Like it or lump it, this is the way it's going to be. Oh, of course you'll be allowed to fart against thunder and make some speeches but this is the budget whether you like it or not. It will pass." What if instead he would have to say, "What are your thoughts?"

Suppose he had to ask for support?

What would happen, of course, is that all parties would be in on the preparation and drafting of the budget.

(Incidentally, the notion that the budget must be secret is long since passé.)

In short, much of the anti-democratic practice by governments would be eliminated by simply using the same protection we citizens have, the right to vote without the consequences of Big Brother watching.

At the ballot box, I believe that there is a better way yet of achieving a democratic, or at least a better democratic government. We've been down this road in British Columbia and damned near made it in 2005 -- a form of proportional representation which, if it had had full Green Party support, would have passed.

Before looking at the downsides as stated by opponents, let's look at the upside.

More than just two predictable points of view of consequence will be present in the House of Commons. The obvious benefactors would be the Green Party, and before you anti-Greeners get too worked up, why shouldn't minority groups in our society be represented by Members of Parliament?

Most PR systems have a threshold, usually five per cent, for a party to elect MPs, which keeps the Screaming Lord Sutch and His Raving Loony Party from getting into power.

The pure PR system simply has political parties put forward lists with MPs elected on the basis of the percentage of votes that party obtains.

This inevitably means a minority or coalition government, but what's wrong with that? Most democratic countries have such governments and get along quite nicely.

What this means is that, in theory at least, a government must have minority acquiescence to pass legislation. In practice, it's in everyone's interest that there be a wide degree of support before governments table their bills. The reality is that although the government may be hostage to a vote in the Commons, no one wants an election before its normal time. If there is a minority or coalition government, no one, not even Screaming Lord Sutch, wants to put their seat at risk until forced to.

The Finance minister is compelled by this new reality to consult widely on his budget as ministers are with their proposed legislation.

There are worries consistent with PR systems.

Won't it make governments weak and indecisive? That depends upon how you look at things. It doesn't bear out in most countries that have PR, or a mix of PR and our first-past-the-post, Why? Because PR doesn't make it easy for parliament to throw out a government, it simply makes it possible. One need only look at the pressure her coalition is putting on Germany‘s Angela Merkel over the EU fiscal mess to see a case where a leader must consult or be gone. Merkel hangs in there because minority parties, in full control of the facts, know that this is in the country's best interest. The moment they don't think that, she's tostada.

What PR does is restore power and prestige to MPs and changes them from being toadies into parliamentarians who must be heeded because they must heed what their voters wish.

But doesn't PR bring about games of compromise, you scratch my back and I'll scratch yours?

Of course it does. But we don't reject compromise in other areas of endeavour such as labour relations. Isn't give a little, take a little better than "my way or the highway"?

Without wanting to be too cynical, with right-wing governments, today everything is a compromise between what big business demands and what government dares to give.

The end of ‘swing ridings'

This is too big a subject to cover in a couple of columns but let me deal with two problems with PR, as seen by opponents.

First, by eliminating constituencies, people have no specific MPs to deal with. With a mixed system such as prevails in New Zealand, you can combine PR with first-past-the-post.

More importantly, with PR no party can afford to leave anyone out. At the provincial level, for example, the Liberals wouldn't dare ignore NDP areas nor the NDP right-wing areas, for a vote is a vote, precious and of the same value wherever it's cast. Every party will, you can be sure, be much more tuned in everywhere, not just to the pockets of pals.

In fact, people will have much greater access to government with PR when parties must deal with everyone, not just people in "swing" ridings.

Second, won't PR mean that their lists will just be made up of party bagmen?

Again, this doesn't make sense. Surely we get poorer candidates under a system where MPs are lickspittles doing what they are told than we would where each has power because he or she has a real role in the governing process.

I have tried here to provoke thought and debate and I leave you with this thought. The biggest enemies of change are the "backroom" boys whose unelected power would be greatly reduced by the power diminishing in the prime minister's office and increasing in the hands of the people we elect, our members of parliament.

To read Rafe Mair's previous column laying out why Canada's system gives the Prime Minister far too much power, and the consequences, click here.