[Editor's note: Evan Vokes, a materials engineer and former TransCanada employee, has lodged a series of complaints about the enforcement of pipeline regulations before the National Energy Board and US PHMSA -- complaints Andrew Nikiforuk has reported on for The Tyee in recent days. The NEB says it is actively investigating his allegations. 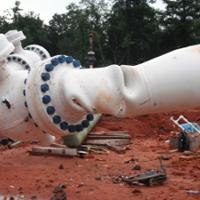 I cannot sum up all deficiencies in a short article but I believe Enbridge faces three critical engineering problems with its Northern Gateway proposal.

They include the quality of its pipe; the reliability of its welds and the thoroughness of its inspection systems on welding quality. Without quality, a small accident can become an uncontrollable disaster. In sum the science doesn't add up and British Columbia will get a pipeline transporting hazardous materials without concern for the fundamental material engineering to make the pipe safe for the long life of this asset.

In the last 20 years, Enbridge has built two pipelines physically similar to the proposed Gateway project.

Enbridge's subsidiary Alliance Gas transmission line used Cat 2 materials and welding design and was 36 inches in diameter with a design operating pressure of 2500psig. This pipeline has a proven seatbelt in case of an accident.

The second was Enbridge's Southern Lights. This line has materials and welding design as a Cat 1 pipeline with a diameter of 24 inches and a design operating pressure of 1440psig. This pipeline does not have a proven seatbelt in case of an accident. During construction the pipeline experienced a high cracking rate and many hydrotest failures. At NEB's request, Enbridge submitted an unsigned engineering report on the root cause problems of serious construction problems with this pipeline to argue that the line was crafted within the regulation and code.

Canada's pipeline rules are made by industry experts, concerned individuals and companies with an agenda to protect their bottom line. The Code's legal notice states that it is "directed to those who have the appropriate degree of experience to use and apply its contents." As such it allows pipeline builders to use Cat 1 pipe and welding techniques for liquid hydrocarbons but only requires notch toughness for Cat 2 and Cat 3 pipe used for natural gas lines.

Steel becomes brittle as the temperature drops and notch toughness performance is temperature dependent. Experts know pipeline rules in the U.S. would require Enbridge to build Gateway with notch toughness for the pipe and welds. The rational is transferable to a proposal that must traverse a cold environment, 54 degrees north latitude across several mountain ranges.

Enbridge proposes to use a steel called High Strength Low Alloy (HSLA) for the Gateway mainline. HSLA has amazing inherent notch toughness properties but the welding of the mainline and the stations as well as the materials in the station do not require notch toughness. Using the legal premise of the wording of the code as opposed to the foreword statements in the code expressing obligation to promote safe engineering; the company is proposing to build a technically challenging project with materials/welding quality that does not ensure sufficient inherent engineering safety to tolerate an accident.

Not surprisingly Enbridge has chosen Cat 1 because it provides the company with greater construction flexibility and decision making. In simple terms that means a less tightly controlled welding procedure and that can be a nasty construction problem as the Tyee series on pipeline incidents has documented.

Speed of welding is a critical because pipeline construction resembles a factory manufacturing process. The factory moves and the product stays in the ground, so every mainline welding operation is designed around a fixed time of about three minutes.

Less tightly controlled welding procedures can sometimes enable a prime contractor to speed up production in this factory. Contractors traditionally use mechanized welding on the bigger diameter pipe but the smaller pipe will traditionally be welded with the cellulosic rods.

The perversity of the Cat 1 decision is that it not only increases welding speed but also the potential for the most dangerous weld defect, cracking.

Next comes welding quality. For Gateway there will be thousands of tie in welds. They are slower to complete and will likely all be manually welded with cellulosic consumables. For this one type of tie in weld, Enbridge proposes to use a high risk technique called a back beveled transition.

While not generally a risk for pump stations, the technique is applied on mainline construction when the pipe wall nominal thickness changes. There will be hundreds of wall thickness changes on Gateway’s two pipelines. Back beveled joints have many technical challenges and are arguably the single largest source of mainline hydrotest failures during construction, yet are still routinely used at creek crossings.

Nova Gas Transmission Ltd identified this type of joint as a problem more than 20 years ago with a report written by the current technical lead engineer at the NEB. It also identified the solution as counterbore and taper. PHMSA recently issued an advisory against the practice of backbeveled transitions as high risk. The following illustration shows a theoretical back beveled weld in CSA Z662, but the actual product generally only resembles this joint.

For a backbevel transition, pipe fitter will approximate the joint to match the bevel of the lighter wall pipe with a hand grinder. When welding begins, it is difficult for the welder to get the melting of parent metal the same on both sides. That results in higher rates of weld defects. The joint design also means NDE inspection is compromised because the industry standard technique for back bevel welds is double wall gamma radiography; which gives film results that are notoriously hard to interpret.

A third factor critical factor is that a backbeveled joint design magnifies the stress across the weld that both skill trades struggled to complete to the code. All factors make back bevel welds a recipe for a latent crack in the system that inline inspection will likely never detect till the crack is severe.

The NEB has recognized cracking as the major cause of leaks and ruptures on the nation's pipelines and the only real mitigation for a formed crack is notch toughness to stop it from spreading.

Last comes the quality of inspection. All welds made under NEB jurisdiction are subjected to non-destructive examinations (NDE) but all NDE methods have inherent statistical risks known as probability of detection. While several methods are acceptable to the code, their ability to detect problems varies. No universal NDE method can cover all scenarios but the NDE method is often tied to the welding process.

Automatic ultrasonic testing is the NDE method of choice for the safer mechanized welding process for pipe diameters 30 inch and above. Conversely a 24 inch pipeline is typically mainline welded with cellulosic rods and inspected with radiography; therefore the risky welding is inspected with an inferior technique. The following chart from Ed Ginzel's book on AUT shows just how variable NDE techniques can be.

Regardless of its effectiveness, NDE cannot fix mistakes related to welding. It cannot correct lack of strength or toughness that result from not following a welding procedure. Whenever a pipeline experiences a high repair rate, the problem lies in its welding inspection.

Cognizant of these facts, the NEB has asked Enbridge for a welding and NDE protocol matrix. But Enbridge's vague reply to NEB's query for Gateway doesn't really define any real matrix or offer any great assurances. It only outlines that schedule driven site construction managers will make the key welding decisions rather than have selection based on engineering of the weld joint.

The Gateway submission and past evidence from Southern lights pipeline suggests that construction managers will also make the decision whether or not to delay the inspection of any welds as well as determine qualifications of welding inspectors. As any human resources person will tell you, past behavior generally indicates future performance.

In sum Enbridge, a company with serious safety issues and history of repeated regulatory violations, is proposing to build a challenging pipeline with the wrong science. In the end every stakeholder and landowner will pay for these "engineering decisions."

There is no seatbelt for this pipeline.