[Editor's note: On July 10, at least 2,000 people, many of them scientists and their graduate students, marched through Ottawa to Parliament Hill to protest the Harper government's cuts to scientific research and clamp-down on what government-funded scientific researchers can say in public -- a development organizers named "The Death of Evidence." Some of the speakers' remarks are reprinted here.] 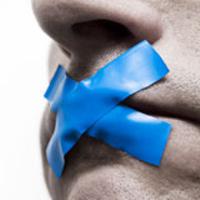 "Thank you all for coming out to mark this important occasion. It is inspiring to see so many scientists here today. I know most of you would much prefer to be in your labs doing what you do best rather than here, but we are at a critical point in Canadian history and if we don't stand up for science, no one will...

"We are here today to commemorate the untimely death of evidence in Canada. After a long battle with the current federal government, Evidence has suffered its final blow. Between the sweeping cuts to federal science programs, the changes to legislation in Bill C-38 and the muzzling of scientists, the injuries to Evidence were simply overwhelming.

"But today, we have chosen to celebrate Evidence. To do so, we have invited a number of prominent scientists, NGO leaders and politicians here today to deliver short eulogies that will, I hope, help us understand the importance of Evidence to Canadian society as well as some of the injuries that led to its demise..."

'We want to work together to solve Canada's problems'
Vance L. Trudeau, professor of biology, University of Ottawa:

"...As a proud citizen and a scientist I am completely perplexed at the decisions to fire world-class scientists, to muzzle government researchers, and to close world-class facilities. There is little budgetary justification for most of the anti-science actions the government has taken. Why not close the inefficient facilities?

"Either the government is very poorly advised, or they are part of an ideology that is anti-science and against making educated, well-informed decisions in the best interest of a dynamic, pluralistic society. I cannot make this judgment myself. I will leave it to the people of Canada to decide.

"However, the tendency to only use the data and evidence you 'like' is the misuse of information for alternative purposes. This is known as propaganda. If you think 'this can't happen in Canada,' then you are disregarding the very evidence the government is providing us by their own actions.

"Prime Minister Harper has said that we will not recognize Canada when he finishes with us. He is clearly missing some history lessons. Unfortunately, aspects of his government's social and environmental policies remind me of the Duplessis-era Québec and Canada in the 1950s.

"I have covered the criticism part of my talk. I would also like to point out something positive on the horizon. The current government is promoting some aspects of applied research and this is a very good thing. I support and respect this positive step, but it cannot be at the expense of fundamental scientific discoveries that actually drive applied research. I wonder whether the prime minister's office staff understands this important connection. The 2,000 people here (official numbers from the RCMP) at the Death of Evidence rally can help explain it to the PMO. We want to work together to solve Canada's issues and problems.

"Allow me to pose a series of questions to put into perspective the decisions our government has taken -- that is, to cut the sources of information needed for policy making, for long-term planning, and to treat all Canadians equally under the eyes of the law.

"Would you buy a house without checking market prices or without shopping for a mortgage? No.

"Would a physician tell you that you have cancer without a test? (Audience shouts 'No.')

"Would you even accept the diagnosis based on one test? (Audience shouts 'No.')

"Would you plan the economic, educational and social programs of a nation of 35 million people without the data provided by a detailed national census? (Audience shouts 'No.')

"I would not accept this approach from any party forming a government. Not from the current Conservatives, the NDP, the Liberals or the Green Party.

"My final question to you is...

"Do you demand that Parliament revisit their ill-intentioned and ill-advised decisions about science cuts? (Audience shouts 'Yes.')

"Yes, Evidence can be resurrected. Thank you."

"A 'Death of Evidence' funeral is fairly funny, but all of us gathered today are deadly serious. In an age of accelerating global climate change, there is no option to us but to behave responsibly.

"We are facing very serious issues regarding our energy, our food, our water and our environment. There are things to discuss as adults: nuclear power may be worth the long-term headaches of its waste; all species may not be equally important to Canadian ecosystems; carbon taxes may be the fairest way to move our society away from fossil fuels. But all these are possibilities that can only be adjudicated for adults with evidence. 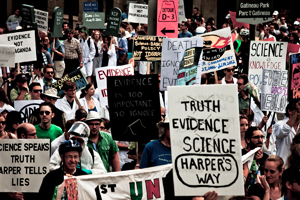 "Indeed, and this has been mentioned already, when wielded by countries, fantasy translates to a very much darker term: propaganda. This sounds alarmist, even to me, and I am saying it, but we should call a spade a spade.

"Recent actions by our federal government, ranging from changes at Statistics Canada, to official positions on climate change and the gutting of the Fisheries Act, to the extreme control over how government scientists communicate to the people they work for, are retreats from reality...

"Canadians want to behave as adults. We must be seen by the world to be behaving as adults. Today, the risks of living in a fantasy world are real risks. A mock casket is funny, but the risks are not funny. Today is not a joke."

'An iron curtain is being drawn between science and society'
Jeff Hutchings, professor of biology, Dalhousie University, president of the Canadian Society For Ecology and Evolution:

"...The federal government has weakened national fisheries and environmental legislation, trivialized the relevance of scientific advice, and eliminated government scientific research of fundamental importance to the health of Canadian society.

"What can go wrong when a country prioritizes economic development at any cost and devalues science at the same time? Canada provides a stellar example.

"The collapse of Newfoundland's Atlantic cod fishery occurred 20 years ago this month. This was the greatest loss of a vertebrate species in Canadian history; it resulted in Canada's biggest single job loss. When will history repeat itself?

"Freedom of expression is no longer a right enjoyed by Canadian government scientists. These individuals paid by taxpayers to undertake research in support of society are not permitted to speak to Canadians unless they have ministerial permission to do so.

"An iron curtain is being drawn by government between science and society. Closed curtains, especially those made of iron, make for very dark rooms.

"A former Scandinavian politician with impeccable international credentials provides an informed and enlightened perspective on politics and science. These are the words of Gro Harlem Brundtland who served three terms as prime minister of Norway. She said:

"'Science must underpin our policies. If we compromise on scientific facts and evidence, repairing nature will be enormously costly -- if possible at all. Politics that disregard science and knowledge will not stand the test of time.'

"The Death of Evidence event was largely organized by science students from across Canada, exemplifying the unified national scientific voice of the future. We contest that recent policies, cuts and deregulation will limit future research capacity and the long-term viability of our natural resources.

"This current generation of students is at the forefront of the burgeoning science-and-policy debate and will be even louder in demanding for open science within a transparent government.

"For all Canadian students, we ask that the government continue to support pure science, consult with the scientific community, and allow the basic freedom of scientific speech that all Canadians have a right to be informed about."

A 'blindfold of ignorance imposed'
Diane Orihel, aquatic biologist, University of Alberta, leader of the Coalition to Save Experimental Lakes Area:

"Dear friends, we are gathered here to mourn the demise of science -- a devastating loss that will reverberate in the daily lives of all Canadians for years to come.

"Today, with great sadness, I reflect upon the passing of Canada's Experimental Lakes Area -- a well-decorated soldier who lost the battle in the fight to protect Canada's freshwaters, its lakes and its fish.

"On May 17, the Experimental Lakes was found guilty of innovative, cost-effective scientific research; its punishment -- a death penalty by the Harper government. The Lakes sit nervously on death row, marked for execution at the age of 44.

"Born in the '60s during a decade of hope, the Experimental Lakes became an explorer, discovering important connections between the activities of people and the rest of nature's living web. It was spawned by a forward-thinking government who recognized the value of science-based evidence to find solutions to its problems.

"The Experimental Lakes propelled Canada to the very forefront of aquatic science. Its 58 small lakes, laced across northwestern Ontario, offered a living laboratory for study unlike any other in the world. The best scientists from around the globe flocked to these Canadian lakes to ask questions that could not be asked elsewhere.

"Its first mission in life was to save a dying Lake Erie. The Lakes led us to understand that the phosphorus making our laundry white was also clogging waterways with algae soup. This evidence led detergent-makers to change their formulas, and our lakes recovered.

"At age eight, the Experimental Lakes tackled a new problem. They uncovered that 'acid rain' from burning coal was killing the base of aquatic food webs, leaving fish to die of starvation. Again, evidence led to changes in air pollution regulations, and our lakes recovered.

"As a young adult, the Experimental Lakes got down to work with hydroelectric utilities to teach them how to design better reservoirs. In the years to follow, the Lakes discovered that hormones in sewage feminize male fish, and that mercury emitted from smokestacks accumulates in fish as a human neurotoxin.

"Now on the verge of its untimely death, the Experimental Lakes are grappling with unresolved problems, such as how climate change alters lakes, and how synthetic nanoparticles -- put on our clothes to kill bacteria -- may be a new threat.

"The Lakes may have answered these questions in time to prevent great human and environmental suffering, as well as economic hardship -- but, alas, the Lakes are marked for death.

To hear some of what was said at the July 10 rally, watch this video.