[Editor's note: The Tyee received this unsolicited op-ed from Adrian Dix's office on Wednesday, July 4. We offered the premier to present her own perspective in a separate article. Her spokesperson said that may be forthcoming.]

Recently, the B.C. New Democrat caucus submitted a letter to the National Energy Board stating that we are opposed to the Enbridge Northern Gateway Pipeline. This decision was made after a lengthy period carefully considering the evidence, the potential risks and benefits, and consulting with British Columbians. 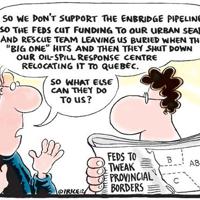 B.C. New Democrats fully support economic development and the creation of jobs in B.C. For example, we support liquefied natural gas plants in Kitimat. We also support the goals of Coastal First Nations, who have a vision of economic development that includes forestry, fisheries, clean power and tourism, but which is in direct conflict with the pipeline and oil tanker traffic on the north and central coasts.

To be worthy of support, proposed projects must generate a net benefit to British Columbians that balances environmental, social, and economic objectives. The Northern Gateway pipeline fails this test: B.C. takes on almost all the risks, while the vast majority of the benefits will be enjoyed by multinational oil companies.

The fate of the Enbridge pipeline will be decided by the NEB's Joint Review Panel, after it has weighed the evidence for and against. That is why the BC NDP caucus submitted our detailed case against the project.

Yet our own provincial government has been absent without leave on this crucial issue. Premier Clark has refused to take a position on the pipeline, even though she has admitted that -- to use her own words -- B.C. is taking "100 per cent of the risks" yet "gets about the same benefit as Nova Scotia."

At the same time, the premier has stated she is "pro-pipeline."

This contradictory stance can only be interpreted as a deliberate strategy of a premier who wants the Enbridge pipeline to proceed, but doesn't want to say so.

The Liberals have deliberately left the job of arguing for the pipeline to the pro-pipeline governments of Canada and Alberta, along with Enbridge itself.

When I questioned the premier about missing the deadline in the Legislature, she claimed "we have the right to present evidence in the final hearings."

This is simply not true: the deadline passed on Jan. 4. The final hearings can only reference evidence introduced by that deadline. The government's opportunities for meaningful participation in the process -- to effectively and forcefully represent B.C.'s interests in the hearings -- are now virtually non-existent.

'Stay tuned' for what?

This is a profound abdication of responsibility by this Liberal government: when her government had its chance to ensure B.C.'s voice would be heard, it passed on the opportunity.

When pressed on the matter, the premier says it's too early to draw conclusions, we need to learn more. The Enbridge application was submitted two years ago. Is that not long enough for the government to draw some conclusions?

Yet all the premier will say when answering these questions is "stay tuned."

Stay tuned for what? For a decision by Ottawa that her government made no effort to influence?

Our government has made a cynical, calculated decision to let other parties, like multinational oil companies and the governments of Canada and Alberta, do the heavy lifting in favour of the pipeline.

Governments have responsibility to represent the people who elect them. Yet the people of B.C. are being denied a voice in the Enbridge pipeline decision because their government is either hiding its agenda by playing cynical political games or is flat out incompetent.

It's time the premier and her government stopped hiding and took a stand on the Enbridge pipeline. Are they for it? Or are they against it?

The people of B.C. deserve to know where their government stands on the Enbridge pipeline. The position of the BC NDP is clear: no to the pipeline and no to oil tankers on our north coast.