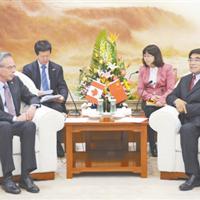 His government is pushing hard for the Chinese-supported Enbridge North Gateway Pipeline, which is predicated on tripling oil sands production. That may or may not happen, but such an extreme development would aggravate the project's already significant economic, social and environmental liabilities in a stagnating global economy.

It would also make Stephen Harper's 2007 promise to reduce our greenhouse gas emissions by 65 per cent by 2050 technically impossible.

To date, the following economic and political questions have gone unasked or unanswered in the media and Parliament:

1. Why aren't some oil sands revenues being set aside for future Canadians?

The federal government now makes approximately $5 billion a year in corporate taxes from tar sands development, or more than the government of Alberta. By some estimates, unlimited oil sands growth could deliver $500 billion to government coffers over the next 25 years. The International Monetary Fund (IMF) and the Organization for Economic Cooperation and Development (OECD) both recommend that oil rent, an unsustainable source of income, be saved for future generations. Canada has ignored these recommendations. To date, Norway has saved $500 billion of its oil wealth while Ottawa has saved nothing for working Canadians. Given rising income inequality in Canada and proposed pension reductions, why has the federal government not set up a fiscally accountable sovereign fund to save this one-time inheritance for the benefit of all Canadians and future generations?

2. Are we harming our democracy?

Petro states represent hydrocarbons and their developers as they increasingly rely on petro dollars instead of taxes to provide essential public services. In so doing they co-opt and buy votes. But by breaking the vital link between taxation and representation, petro states diminish political and electoral accountability. "An unusual combination of dependence, passivity and entitlement marks the political culture of petroleum exporters," explains U.S. political scientist Terry Karl. How will Canada's elected representatives prevent oil revenue from undermining the nation's democratic institutions?

3. Are you aware of 'Dutch Disease,' and if so, how do we prevent it from eroding vital parts of Canada's economy?

Every nation that depends on oil exports eventually inflates its currency and thereby destabilizes its manufacturing and agricultural sectors. "A severe case of Dutch Disease has dramatically reduced the breadth of the Canadian business sector over the past decade, hollowing out manufactured goods exporters and making the nation increasingly reliant on commodity demand," reported the independent research firm, The Macro Research Board, in 2011. Economists estimate that half of 340,000 jobs lost in the manufacturing sector over the last decade are due to rapid expansion of bitumen exports. What policies does Ottawa propose to deal with the hollowing out of the Canadian economy by the "Dutch Disease" and the "Resource Curse"?

4. Have you examined the geopolitical risks of tying our fate to China as superpower?

The proposed Enbridge pipeline would send unprocessed bitumen to China, the globe's new powerhouse and the world's second largest consumer of energy. Given that China and its growing military ($150 billion a year) will eventually challenge the global leadership of the United States, why hasn't the Canadian government examined the political risks of becoming an oil supplier to an industrial Communist superpower?

5. Are we boarding an economic roller-coaster that could crash?

Bitumen, the world's most expensive hydrocarbon, now costs between $85 and $102 a barrel to produce. It takes $8 billion to put a million barrels of oil a day into a pipeline in the Middle East. In contrast, extreme bitumen requires an investment of at least $45 billion to grow the same volume of bitumen plus another $100 billion for upgrading the heavy crude. As a consequence the mega-project is highly vulnerable to volatile global petroleum price swings, improbable events and disruptive technologies.

Moreover the world's economic crisis is directly related to the high cost of oil. In 2007 the Canadian Parliament recommended that Ottawa conduct rigorous cumulative impact and socio-economic assessments of the oil sands (Recommendation 11). Why has the Conservative government repeatedly failed to do a basic economic risk assessment on expanding the world's most expensive and difficult oil source in a stagnating global economy?

6. Why aren't we taking a strategy that would directly shore up our own energy security?

Quebec and Atlantic Canada are nearly 100 per cent dependent on foreign oil supplies from Venezuela, the North Sea and the Middle East. The majority of these imports come from unstable petro states or declining oil fields. Why does the Canadian government place energy security for an authoritarian Chinese regime ahead of energy security for ordinary Canadians?

7. Why raise fears about charities whose foreign funding is a tiny percentage of what China invests in Canada's economy and politics?

State-owned Chinese corporations are among the world's largest oil firms and famously corrupt. They have invested more than $16 billion in the oil sands. Even Richard Fadden, the head of the Canadian Security Intelligence Service (CSIS), has warned that China is one of several foreign powers trying to influence Canadian politics. In contrast, U.S. charities have invested but $30 million in Canadian environmental groups to contest Big Oil's interests in a democratic society.

Why is the Canadian government more concerned about the impact of $30 million worth of charitable donations than $16 billion worth of hardcore Chinese state investment on Canada's economy, politics and sovereignty?

Petro states typically waste their oil wealth by aggressively building their militaries. Most OPEC countries, such as Saudi Arabia, spend three times more on military hardware than non-oil exporting countries. Even Norway, a key oil exporter, has become the world's seventh largest weapons exporter. Canada now spends more on its military than it did during the Cold War and ranks as the world's 13th largest military spender. Why is Canada spending petro dollars building up a military machine? And for what purpose?

Environment Canada estimates that total carbon emissions from the oil sands will likely grow from 49 million tonnes today to 92 million tonnes by 2020. At that point the industry will surpass the ocean acidifying emissions of Canada's buildings, agriculture or entire passenger car fleet. Any further expansion of the oil sands nullifies Prime Minister Stephen Harper's 2007 promise to reduce pollution by 65 per cent by 2050. Why does Canada not have a national carbon tax that removes two kilograms of carbon out of the economy for every kilogram produced by the oil sands?

10. Why not refine it here, creating jobs and lowering risks?

Energy expert David Hughes has calculated that existing pipeline capacity can accommodate as much as 100 per cent growth in the oil sands over the next decade. In other words, the Northern Gateway project is not needed. Instead of building excess capacity to ship bitumen unrefined, why do Alberta and Canada not have a conservative plan for the oil sands that adds value, lowers carbon risks, slows development and puts the interests of Canadians first?

11. Were you elected to hasten pollution and increase cancer risks for Canadians?

A half dozen studies have concluded that the Alberta government and Ottawa have systematically failed to monitor pollution in the oil sands at current production levels. Yet the Gateway project would worsen acid rain, water contamination, cancer risks, caribou extinction and groundwater depletion in the oil sands.

In 2011, the Office of the Auditor General declared that "incomplete environmental baselines and environmental data monitoring systems" had made it impossible "to consider in a thorough and systematic manner the cumulative environmental effects of oil sands projects in that region."

Why have the Alberta and federal governments not addressed this environmental deficit and acted on key recommendations for a monitoring commission in a timely fashion?