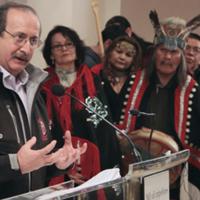 How First Nations Are Gearing Up for Legal Battle Against Gateway

Within a year the project was back from the dead, resurrected by a timely injection of cash from domestic and Asian energy interests. "Belief in the project is so strong that we have obtained the $100 million of funding from a group of western Canadian producers and east Asian refiners to get the projects through regulatory approval," said Enbridge CEO Pat Daniel during a July 2008 conference call. "The support from Asia for Gateway is broad based, and now includes refinery support from Singapore to Japan."

Yet nearly four years after this announcement was made, questions have emerged about whether the pipeline can count on there being enough customers to make it a commercial success. Enbridge continues to portray a series of non-binding "precedent agreements" as evidence the market will be there once the project done, while one major competitor has protested to federal regulators that Gateway's lack of demonstrated commercial support justifies the pipeline application being thrown out altogether.

The murky state of Northern Gateway's potential customer base is part of an emerging scenario unprecedented in Canadian history: a $5.5 billion pipeline championed by Canada's government in the midst of its own federal review, ballooning construction and oil sands production costs, and a First Nations revolt against the project. Such unresolved variables at this stage of the game have some close observers of the project wondering whether the pipeline, even if approved, will ever get built.

In one shot during 2008, Gateway secured nearly $100 million earmarked to push Gateway through the federal regulatory process.

The contributors were never officially announced, but the cash was provided by 10 separate companies (each giving $10 million) in exchange for what Daniel at the time called "founder shipper status" -- the non-binding option to future pipeline access and equity in the pipeline.

Daniel and company remain mum on the identity of the contributors, but at least five have emerged: MEG Energy Corp, a small oil sands developer partly owned by the China National Offshore Oil Corp., (CNOOC), as well as China's state-owned Sinopec, also known as the China Petroleum & Chemical Corporation.

Since the $100 million was given, Enbridge has made repeated claims to the public, shareholders and Canadian regulatory agencies that the pipeline is commercially viable.

As early as Aug. 2005, Enbridge committed in writing that it would conclude "binding agreements" for both its oil and condensate pipelines before seeking regulatory approval. (Gateway's dual pipeline is designed to both export bitumen/synthetic crude and import a fossil fuel-based liquid called condensate).

In Aug. 2011, Enbridge announced it had filed with the National Energy Board (NEB) "commercial agreements which fully subscribe for the long term servicing capacity for both the crude oil export and condensate import pipeline."

But a visit to the NEB website shows only unsigned sample copies of "precedent agreements." The commercial terms indicate that these contracts are not binding -- they are little more than handshakes.

"Under the agreements, would-be oil shippers are not obligated to send a drop of crude through the pipe," writes Pembina's senior oil sands policy analyst, Nathan Lemphers, in a report. "The oil producers and refiners that signed on to Gateway -- a list of companies that Enbridge has declined to either identify or quantify -- commit no [future] money, no oil and receive no financial penalty for backing out."

For a precedent agreement to become legally binding, writes Lemphers, both letters of support and transportation shipping agreements must be concluded. Until that happens, any number of issues such as First Nations opposition, regulatory delays, or market volatility can cause prospective Gateway shippers to walk, just like Petro China did in 2007.

Despite this uncertainty, Enbridge's August announcement of a fully committed, subscribed pipeline was widely reported in the North American business press, including this CBC story, which parroted Enbridge's line that "companies have fully subscribed to long-term service."

Lemphers adds that it is unprecedented for a Canadian export pipeline to be approved without any long-term shipper agreements. He cites the recent examples of TransCanada's Keystone and Keystone XL pipelines, which had transportation service agreements in place for 84 and 75 per cent of the pipelines' capacity respectively by the time they submitted applications to the NEB.

Enbridge was forced to clarify the status of its precedent agreements for Northern Gateway, in response to a Nov. 2011 motion (available on the sidebar) filed by Ecojustice to the federal Joint Review Panel: "potential shippers will not be executing the Transportation Services Agreement until after the completion of the regulatory process," responded Enbridge. "The Pro Forma Precedent Agreement does not oblige any potential shipper to enter into a Transportation Services Agreement."

Enbridge did not respond to The Tyee's repeated requests for an interview to confirm whether any binding agreements currently exist. Over the course of several days The Tyee also made requests for interviews with officials at Natural Resources Canada, but was not granted one by publication time.

Kinder Morgan Canada, the Calgary arm of the Dallas-based oil company, not only hopes to expand its own existing oil sands pipeline from Alberta to Burnaby by 2016, but has asked Canadian regulators to throw out Enbridge's Northern Gateway application altogether.

In a Sept. 2010 letter to the federal Joint Review Panel, Kinder Morgan Canada asks the following question: "Can the panel consider the application... if there is no demonstration of market support for the project, and it does not comply with the NEB's filing requirement of demonstrating economic feasibility and need?"

The "critical deficiency," reads the complaint, is the lack of any evidence of binding commercial agreements for the transportation service to be offered. "Such a deficiency should be fatal to any further consideration of the application."

The letter goes on to warn the regulators that Gateway's application creates a dangerous precedent, shifting the entire process from a race to obtain contractual support for new services, to a race to get regulatory approval for unproven "concepts" without the need to demonstrate market support. Pembina's Lemphers concurs, stating in his report that such an approach could spur a "rush of pipeline speculators who seek regulatory approval for conceptual pipelines, effectively putting the cart before the horse and placing greater strain on both regulators and the affected public alike."

Enbridge has maintained (in its May 2010 project application here) that the $100 million from energy companies, along with more than $100 million of its own "at risk" money, is enough to demonstrate the business plan is sound. "This in itself is a substantial demonstration of market support and commercial viability."

In response to Kinder Morgan's complaint, federal regulatory agencies appear to have taken Enbridge's side. In Jan. 2010, the Joint Review panel ruled that a certificate of public convenience and necessity -- needed by Enbridge before construction can commence -- can be issued in the absence of firm shipping contracts. "Binding commitments for capacity on the pipeline represent strong but not necessary evidence of the economic feasibility of a project."

These concerns will not likely go away, however; both Ecojustice and Kinder Morgan are expected to raise them again when formal Gateway hearings commence this fall. Kinder Morgan declined an interview, except to state that "Our letter [of Sept. 2010] states our concerns."

For all the noise about the imperative to diversify Canadian oil markets, the Northern Gateway project remains no certain sell to potential customers, including those in Asia.

Interviewed for Alberta Oil Magazine, Stephen Laut, president of oil sands producer Canadian Natural Resources, characterized Gateway as a project that is at least a decade away; luring shippers into costly multi-year transportation service contracts will require "the security of a strong market."

This in a market that remains jittery since oil prices tanked in the last recession, while costs to develop oil sand projects continue to grow. Consider the case of Nexen Inc. -- one of the 10 Gateway investors in 2008 -- which has been hammered by rising costs at its Long Lake oil sands project. Nexen stock has dropped to about $18 from a peak of $27 in March 2010, and two senior executives, including the president, left the company in mid-January.

Barry Robinson, a Calgary-based environmental lawyer with Ecojustice, says the caution we're seeing from potential Gateway customers -- Asian and otherwise -- is understandable. With the Keystone pipelines all under capacity, Northern Gateway in regulatory and Kinder Morgan hoping to double their existing oil sands pipeline, there are a lot of options. If a company jumps too quickly and commits to Gateway, what happens if Kinder Morgan comes along offering a cheaper rate? "If I was an oil company right now, I'd probably be doing what they're doing, which is sitting and watching.”"

Potential customers are not the only ones taking a wait-and-see attitude on Gateway. "There is a significant degree of regulatory risk," says Steven Paget, VP of Energy Infrastructure at Calgary's First Financial Capital Corp. "So if we're asked whether people should buy or sell [Enbridge shares], our estimates assume no pipeline and we're waiting on the [regulatory] process before we add it."

Another veteran financial analyst, who requested anonymity, agrees that Gateway does not exist from a stock evaluation perspective. But will it get built? He laughs at the question. Enbridge is valued at close to $40 billion, with $20 billion in projects currently in the works, he says. At most, the company will have a 50 per cent interest in Gateway, making it a $2.5 billion project for the company. "I hate saying $2.5 billion is not a big project, but for Enbridge? Is this going to make or break its growth profile? No way."

It's not a question of if Gateway gets built, but when, he says. And therein lies a problem. In 2007, Petro China withdrew its support from Gateway because project delays were considered untenable. Nearly five years later, not much has changed.

"When they talk about Gateway, I have flashbacks to TransCanada's Alaska gas pipeline project. It's been going on since the late 1970s, and they're still looking at it."