When Apple announced its last-quarter numbers on Jan. 24, you would have thought Steve Jobs had risen on the third day. 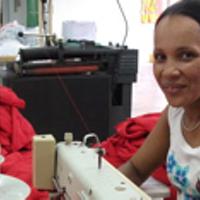 How One Tiny Factory Is Challenging the Sweatshop Norm

The business media responded as if to a religious experience. The Wall Street Journal breathlessly reported Apple's earnings of $13.1 billion or $13.87 a share -- both doubling last year's numbers. The Globe and Mail crooned about the "750,000 iPhones, iPads, iPods, and Macs" sold every day. In fact, the Globe couldn't stop talking about it for days.

The news came just days after Apple released a free app, iBooks Author, that seems likely to transform (or destroy) the $10-billion U.S. textbook industry, just as Apple had transformed movies with Pixar and music with iTunes. A company given up for dead in the 1990s has changed technology out of all recognition, and seems likely to change itself as well: The desktop computer is clearly on its way out, and the laptop could follow as the iPad increases its power.

I became a Mac user over 20 years ago, teaching myself Word 4.0 as I converted my class handouts into electronic format -- and eventually into an often-updated textbook. I've written hundreds, maybe thousands, of articles on Macs, and found it amazingly easy to compile books just by dragging files and folders around on a screen.

After years of defending my oddball taste in the Mac-PC tribal wars, it's a kind of vindication to see Apple bestriding the world like the colossus it is. Having just finished Walter Isaacson's biography of Steve Jobs, I'm keenly aware of how Jobs created that world... and how easily he could have failed.

So I'm feeling pretty good about Apple, and I look forward to grabbing an iPad 3 when it becomes available to the yearning masses. I'm thinking about a Mac Air too, if Apple still wants to make laptops.

But I'm also feeling pretty bad about Apple, because I realize that it has created a deeply addictive technology.

The message is jolts

This is not a recent insight. Teaching in Capilano College's Mac-based Infotech program even before the web, I could see that we write and read differently on the computer screen. The medium really is the message online, and the message is jolts.

Jolts are the little sensory rewards the computer gives us. They come when we turn on the machine and it bongs at us. Jolts come with every alert, every new window, every avian squawk and porcine grunt in Angry Birds. Jolts come with every email and text message. Isaacson doesn't use the word, but his description of Apple packaging shows that jolts of pleasure are designed right into the boxes that your Mac and iPhone come in.

Jolts also come in the form of verbal abuse, which inspired the email and forum flame wars of the 1990s, the ongoing hysteria of today's political blogs, and the punchlines of Twitter.

Like lab rats with electrodes wired into their brains' pleasure centers, we learn what gives us the strongest online jolts, and we keep doing it. We forget that the lab rats preferred to push their jolt button until they starved to death, but in our few lucid moments we realize that we're well and truly addicted to the jolts that Apple gives us.

Hence our rapt anticipation of the next jolt machine: the iPhone 5, the iPad 3, or something completely novel that Steve knew we'd want before we ourselves did. (In one of my 1980s SF novels, I imagined something like the iPad, but assumed it wouldn't arrive until circa 2080.)

Addiction does bad things to you, and not just because you can't get through a class without texting your sweetie or listening to your prof with your iPod providing the soundtrack.

Centuries ago, Europeans and then North Americans learned to like sugar in their tea and pastry. To get it at a reasonable price from the plantations of the Caribbean, they agreed that part of what they paid would cover the costs of capturing black Africans, transporting them across the ocean, and working them to death.

Sugar addiction made Saint-Domingue, today's Haiti, the richest piece of real estate in the world. When Haiti's slaves revolted, European and American sugar addicts were outraged and punished the slaves with two centuries of bullying and outright occupation.

Similarly, North America's drug addicts may be vaguely aware that their spending on marijuana, hashish, and cocaine is funding a civil war in Mexico that has killed an estimated 47,500 people since 2006. They may also be aware that Lower Mainland drug retailers are shooting one another dead for the privilege of feeding the addicts' habits, but no addicts seem ready to quit over the issue.

And by the same token, no one addicted to Apple products is going to give them up just because young Chinese workers might be suffering and dying to build those cool, designed-in-California machines.

Concern about working conditions in Chinese factories has been growing for years. Anyone who has seen Edward Burtynsky's Manufactured Landscapes is aware of the enormous factory system that China has created to feed our general addiction to cheap consumer goods. The specialized addiction to consumer electronics, however, has largely escaped scrutiny.

That is beginning to change. An American journalist and performer named Mike Daisey several years ago visited Chinese assembly plants, run by Apple contractor Foxconn, where workers have leaped to their deaths from their dormitories. His resulting one-man show traces his journey from Apple fanatic to facing up to how that makes him complicit in the misery of others -- and how Steve Jobs' celebrated brilliance ensures he and his corporate colleagues all along must have been fully aware of their "terrible sin."

Just as Apple was announcing its superb sales and profits, The New York Times began a series on Apple and its reliance on Chinese industrial power and flexibility. The first article argued that the U.S. would never have a workforce that could be rousted out of its dormitory bunks to make last-minute changes in a product.

Another NYT article reported several recent explosions and chemical accidents in the factories of Apple suppliers. These have caused deaths and serious health problems.

The authors wrote: "Some former Apple executives say there is an unresolved tension within the company: executives want to improve conditions within factories, but that dedication falters when it conflicts with crucial supplier relationships or the fast delivery of new products."

'Foxconn is one of the best'

The New York Times backed up its reporting by interviewing Li Qiang, founder of China Labor Watch. Li pointed out problems with pay and working conditions, and paid Foxconn a backhanded compliment:

"Foxconn is not good. But if we compare all industries, electronics, textile, toys, Foxconn is one of the best. The biggest problem for Foxconn is the workers are working under a lot of pressure. They're standing 10 to 11 hours a day. Foxconn treats the workers like they are machines. They think about how many products they can produce, not about giving the workers a rest. But in the electronics industry all the companies are the same."

The Macosphere, blogs that follow Apple with obsessive attention, are also talking about the conditions under which our iPads and iPhones are being built. Some, like MacDaily News, have responded angrily to the NYT reporters, calling them "slanted, biased yellow journalists." MacDaily News also ran a letter from Apple CEO Tim Cook in which he called the New York Times articles "patently false and offensive."

9to5Mac, meanwhile, ran a three-minute video of Steve Jobs talking last September about the problems with Foxconn and saying, "For a factory, it's a pretty nice factory." MacRumors cited former Apple executives as saying the company has few alternative suppliers, so it has to put up with issues that in theory it doesn't tolerate.

And that applies to Apple addicts as well. If we don't want to buy tainted goods, what do we buy that hasn't been built under the same conditions? Li Qiang argues that "in the electronics industry all the companies are the same."

Apple, and all electronics manufacturers, are going to have to prove that their addictive toys are at least made by people working under humane conditions. Until then, we should remember an old test of morality:

A man in China is strapped into an electric chair. You are sitting here, in front of a button. If you press the button, the man will die. You won't see it, and you'll never meet any of his family or friends. But you will get a large amount of money, or something else your heart desires.

Do you press the button?

Or do you tap the screen?