[Editor's note: On Jan. 2 The Tyee published Anna Ling Kaye's op-ed "Why We Shouldn't Ban Shark Fin," in which she argued that boycott campaigns and public education are better approaches than an outright ban on shark fin, because the ban may alienate Asians who might perceive it as racially motivated. The column sparked Claudia Li, founder of the Vancouver-based Shark Truth, to write this column in response.]

My parents immigrated to Vancouver from Hong Kong in their late 20s. Before they got married, my mother was working with my grandma, or Ah Poh, in a take-out pizza shop in L'Orange, Saskatchewan to make ends meet. Ah Poh told me stories of the freezing winters, adventures to locate a grocery store that sold ginger so they could make congee, and squeezing into the tiny pizza shop attic to sleep at night. Like many immigrants, my parents settled in what the Chinese coined "Golden Mountain," because of the spectacular natural landscape, proximity to their home in Hong Kong, and for the opportunity to create a life here in Vancouver. 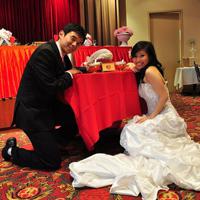 Why We Shouldn't Ban Shark Fin

My sister and I went to grade school in North Burnaby at a time when the Chinese population was significantly smaller than today's. Growing up, I experienced my fair share of bullying and as an ethnic minority, I often gave my bullies more material to work with. I remember once in Grade 5, a kid called me a "C----" and threatened to take all my hard-earned stationary unless I did their Chapter 11 math homework for them. I was initially confused because contrary to the Chinese stereotype, my math skills fell on the left side of the bell curve. Society's come a long way since those Grade 5 days, but unfortunately I still see, experience and feel forms of discrimination including racism. Racism is when we're attacking a person or a group of people because of the colour of their skin or the shape of their eyes.

Banning shark fins is not racist, despite what some may claim. The proposals for a shark fin ban might make people feel uncomfortable, but they are fundamentally addressing the shark fin trade that involves not only consumers, but businesses, retailers, shark finners, middlemen, wholesalers, governments, regulatory bodies and most importantly, vulnerable sharks -- none of which are associated with one race or culture. With the growing global awareness around shark conservation, a shark fin ban is merely reflecting the cultural shift we're seeing towards the product: people of all backgrounds want to protect sharks.

Leaders, including those from within the community like Wayson Choy and Yao Ming, have gone Fin Free and advocated for legislation to protect sharks. Moreover, shark fin bans have been proposed in China by lawmakers like Ding Liguo, and successfully passed in California by Assembleyman Paul Fong and in Toronto by City Councillor Kristyn Wong-Tam. How can shark fin bans be seen as racist when the advocates are coming from within the Chinese community? It divides and polarizes shark fin into a racial issue when it is fundamentally an ecological one.

Why we urgently need bans

Sharks have survived five mass extinctions and cruised the oceans 400 million years ago -- before dinosaurs even stepped foot on earth. They are top predators and are given the colossal responsibility to maintain the health of our ocean ecosystem by keeping the food chains below them in check and balance.

Sharks can live up to 100 years old, take 25 years to reach sexual maturity and reproduce very few young (average 2-3 annually). At the alarming rate they are being harvested (up to 73 million sharks are killed primarily for their fins each year) and paired with the fact that their biological nature is working against them, scientists estimate that 25 species of sharks and rays have a risk of disappearing within our lifetime.

Alarm bells are ringing across the world because removing a top predator from our ecosystem is not only environmentally devastating, but like most environmental issues, it comes with dire economic and social impacts. One local example that hits home is the exploitation of sea otters in the 17th century on the Pacific Coast. It led to a major collapse in marine life and still hasn't recovered to this day.

Sharks are being poached primarily for their fins to make something called shark fin soup, which I grew up eating. Fins are the only high-value part of the shark that drive the unsustainable slaughter and waste of the entire remaining animal: a Whale Shark's dorsal fin can fetch up to $50,000. While the fins are like gold, the rest of the shark is often not worth the space on the boat to fishermen. Most shark meat is undesirable or inedible often due to the high urea content. Other shark by-products like cartilage, liver oil and skin drive a very small portion of demand and are marginal in dollar value.

Efforts and legislation to prohibit shark finning at sea are few and far in between. The little legislation that does exist also meets the logistical challenge of enforcing laws in the open ocean. This is why we need demand-side legislation to conserve sharks.

Responding to claims of cultural attack

Most popularly served at wedding banquets, shark fin is a luxury delicacy that not only represents status but the important Chinese virtue that I stand tall and proud for: "sharing your fortune" or generosity. Through our Happy Hearts Love Sharks wedding contest and education campaigns, we've begun to see a fundamental shift in the Chinese community. Wedding couples are beginning to realize that we can still showcase generosity to our guests, for example, by doing things like donating money to nonprofits and charities as wedding favours. They, along with many Chinese families, shark fin-serving restaurants and leaders are not only going Fin Free, but are also advocating for shark fin bans.

Some argue that if it's ecological and animal rights justice we're after, why are we not banning critically endangered Bluefin Tuna, or all factory farming for that matter? If I could personally conserve all animals and our planet, believe me, I would. But this position presents a false choice. Conservation is collective action with education, community and legislation working collaboratively -- it's not "all or nothing." We do not stop seeking a cure for diabetes because we haven't cured cancer. Seldom do we achieve anything grand in one fell swoop. The goal is to change our collective consciousness by addressing one issue at a time.

Finally, the argument that banning shark fins is racist: while I understand where the knee-jerk reaction comes from and include here the disclaimer that there are indeed racist folks out there (for the pure, unfortunate sake of being racist, not because of shark fin), cultures are constantly changing. Cultures are dynamic and are defined by the values of present society. My great-grandmother had her feet bound, my grandmother didn't have the right to vote and my mom and I just witnessed the British empire changing the rules for the first time to allow female heirs to ascend the throne.

When campaigning on a sensitive issue -- regardless if it is education or legislation -- it is vital to maintain a level of mindfulness and understanding of all stakeholders and hence, cultures involved. Our organization has representatives from the Chinese-Canadian, Hong Kong, Taiwanese and mainland Chinese community and we continue to partner with organizations in the U.S., Hong Kong, Singapore and Malaysia.

Through awareness and education, we've built an important foundation for change by creating opportunities for the community to engage, but we can only successfully conserve sharks if it's accompanied by legislation to stop the shark fin trade. It's not education or legislation -- it's both. For the sake of the planet and human survival, we simply cannot run the risk of seeing sharks disappear from our oceans. If we were in the ecology hospital, Code Blue would have been called for sharks a long time ago.

For what I feel like is the first time in Chinese-Canadian history, the shark finning issue is reaching the mass community, turning people's heads and leading us to think and reflect about systemic environmental issues. One of many reasons why I'm proud of my Chinese heritage: our culture is one rooted in harmony, respect for nature and devotion to family and community. My parents immigrated here with the dream to give our family a happy, healthy future. They worked hard to make it a reality. Now it's our responsibility to carry forth that dream for our children, and part of that dream is ensuring they can enjoy and participate in a healthy planet where our sharks and oceans can continue to thrive in their lifetimes and far beyond.